New Life for a Gastrectomy Patient

(Minghui.org) When Ms. Zhu was taken to the hospital after several bouts of severe stomach bleeding, she was told by the doctor that she needed to have four-fifths of her stomach removed.

Since childhood, Ms. Zhu suffered from intestinal ruptures, bacterial infection in her kidneys, as well as cirrhosis of the liver. Continuous medication over the years only worsened the health of her digestive system, and she eventually developed peptic ulcers and began to suffer from gastrointestinal bleeding.

Her stomach had simply been damaged beyond repair.

Life without a stomach was painful and difficult. She had to be very careful about everything she ate – it couldn't be sweet or acidic, it had to be easily digestible, and she could never eat too much or too little.

Ms. Zhu was only in her forties, and yet, life to her now seemed disheartening and hopeless.

On top of her serious health concerns, as a college professor, Ms. Zhu still had daily professional and societal responsibilities to fulfill. Her life became one of constant running around between her school, home, and the hospital.

After a doctor visit a few years later, Ms. Zhu was even more disappointed to hear that she now had heart problems as well. Her arteries were hardening, and there was insufficient blood flow to her brain.

Even though excessive medication had destroyed her digestive system, she now had to take more medication to control her other diseases as well.

By this time, Ms. Zhu had suffered through fifty-five years of poor health.

For so many years Ms. Zhu had been longing for something that could turn her poor health around. She didn't know what it was, but she was waiting for it. Something was out there for her, she believed, and it would come to her one day.

“You can't take medicine anymore. You are suffering from ulcers again,” Ms. Zhu's doctor said to her during a regular checkup.

Then her doctor offered, “You know, I heard that there was a popular qigong practice called Falun Gong that is good for healing. Give it a try; this might be your solution.” 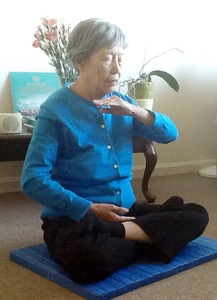 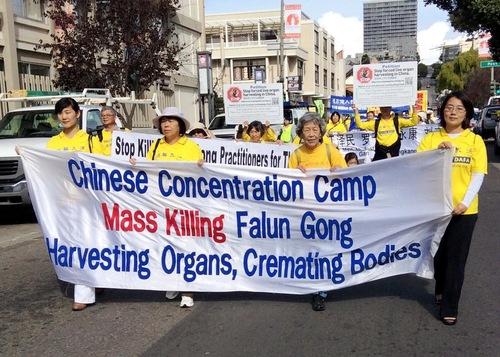 April 20, 1996 was the most important day in Ms. Zhu's life: it was the day she learned the Falun Gong exercises. Several practitioners who attended Ms. Zhu's university taught them to her.

When she did the exercises that first time, she could feel energy flowing through her body. It was a wonderful experience. “It's just great! This is what I have been looking for!” she thought.

At the beginning, Ms. Zhu just focused on doing the exercises. Growing up in an atheist society, she had reservations about the spiritual aspect of the practice.

Things changed after she watched a video of practitioners sharing their cultivation experiences – how they benefited from the practice in both mind and body. The video was very inspiring, and it also helped her to understand the benefits of cultivating one's character and assimilating to the principle of Truthfulness-Compassion-Forbearance.

A relative encouraged Ms. Zhu to read Zhuan Falun – the main book of Falun Gong. As soon as she picked up the book, she found that she couldn't put it down.

Her health improved exponentially as she did the exercises and read the book.

One day, Ms. Zhu was having dinner with her husband after coming back from group exercise practice. They were eating while watching TV and chatting with each other. On the table was a dish of spiced beef. Without even realizing it, Ms. Zhu had eaten one piece after another. With her poor digestion, she never could have done that before.

Her husband was thoroughly impressed with the healing effects of the practice.

He recalled, “It was just amazing! Before, she was very particular about the food she ate. But now she doesn't feel uncomfortable after eating an entire dish of beef.”

Two months after Ms. Zhu started practicing Falun Gong, she went back to the hospital for a checkup. She was happy to learn that both her kidneys were now free of bacteria, and the blood cells in her urine had disappeared. Everything was back to normal again.

“I joined a group of practitioners who did the exercises together at the university every morning. Quickly, it grew from a dozen people to more than 300 people. We did the exercises even when it snowed. Although the weather was so cold, no one seemed to be bothered by it and the entire site was so peaceful,” Ms. Zhu said. “It was truly a joyful period for me.”

Shortly after Ms. Zhu and her husband moved to the United States in 1999, a nationwide persecution of Falun Gong was started by the Chinese Communist Party. Propaganda attacked the practice everywhere.

“Falun Gong gave me a new life. I experienced it myself. It pains my heart to see people believing the propaganda and developing hatred toward the practice. It's my responsibility to let people know the facts,” she said.

Now in her eighties, Ms. Zhu is still very active in the community, raising awareness about the persecution and clarifying the facts about Falun Gong to the local Chinese people.

“Sichuan Woman: I Nearly Had My Organs Forcibly Taken”