(Minghui.org) Falun Gong practitioners held a large rally in Hong Kong on December 7, 2014 to mark the 10th anniversary of the publication of Nine Commentaries on the Communist Party in The Epoch Times, an independent newspaper that provides uncensored news about China. The rally drew support for the millions of Chinese people who have withdrawn from the Chinese Communist Party (CCP) and its affiliated organizations.

The Nine Commentaries on the Communist Party thoroughly analyze the CCP's nature, which is based on lies, violence and is against humanity. After their publication, the commentaries spread widely in China and beyond, and led to a wave of people withdrawing their CCP membership. More than 180 million Chinese people have declared their withdrawal from the CCP and its affiliated organizations. 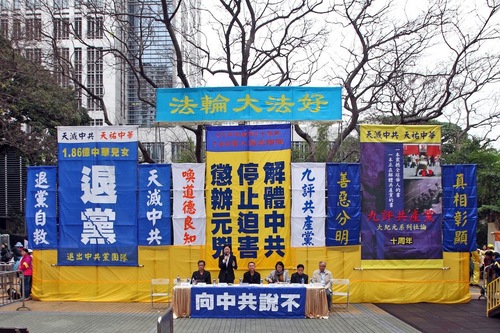 About 800 people attended a rally in Hong Kong to mark the 10th anniversary of the publication of the Nine Commentaries on the Communist Party.

Ms. Guo Jun, Director of the Hong Kong branch of The Epoch Times, was one of the speakers at the rally. “The core value of the CCP culture is hatred and struggle, due to its extreme, selfish nature. All of the party-controlled media instigate hatred in their reports. Day in and day out, the public are misled and unable to differentiate right from wrong. Some even help the Party to harm others. The Nine Commentaries completely reveals the evil nature of the Party and its crimes against humanity.

“The Nine Commentaries pointed out, 'The CCP's promises cannot be trusted as none of them have materialized. Whoever trusts the Party on a life issue, will lose life later for that reason.'

“I think the withdrawal from the Party and its affiliated organizations by more than 180 million people is a group statement for a bright future.”

Ms. Teresa Chu, a human rights attorney from Taiwan, said at the rally, “Over the past ten years, many people have read the Nine Commentaries and learned that the Party and its former head Jiang Zemin colluded to persecute Falun Gong. Currently, a coalition against the CCP's live organ harvesting has been formed among elected leaders across the four continents to help stop the persecution.

“If the perpetrators of the persecution of Falun Gong and the CCP's forced organ harvesting [from living Falun Gong practitioners] are not brought to justice, China cannot reach rule of law.” 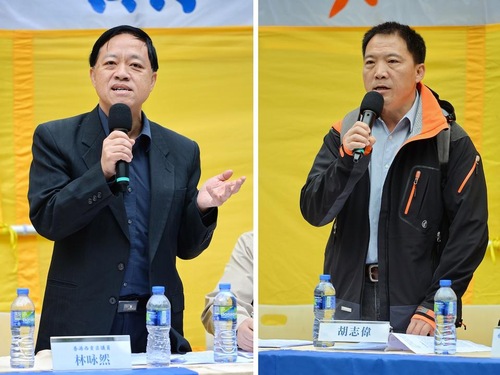 Hong Kong Legislative Council Member Wu Chi-wai said in his speech, “The Nine Commentaries let more people know the nature of the CCP. We need more people to be aware of the Party's nature. The CCP will disintegrate once most people renounce it.”

Another Legislative Council Member Lam Yung-jan said, “The Nine Commentaries make everyone aware that the Party should be discarded. The Party is corrupted and is losing support among the public. It will be disintegrated one day. If people were all aware of the nature of the Party, it would disintegrate tomorrow.”

Former editor Zhu Xinxin of Hebei Radio Broadcasting Station said he renounced the Communist Youth League in 1989 and was inspired after reading the Nine Commentaries. He said, “The CCP adopts negative and totalitarian stuff from ancient times, but discards excellent parts of traditional culture. It also adopts the atheism from Marxism-Leninism. Then it becomes an arrogant evil organization.

“Everyone should call on friends and family members to withdraw their membership from the CCP and its affiliated organizations. We can then break away from the Party in our mind and cleanse ourselves of the Party culture.”

Researcher Huang Guochang of the Institute of Law, Taiwan's Academia Sinica, said, “So many people are quitting the CCP. It indicates that people are changing in China and cannot tolerate the CCP's totalitarian regime.”

Spokesperson Wang Zhiyuan of the World Organization to Investigate the Persecution of Falun Gong made a pre-recorded speech for the rally. He said, “The brutality in the CCP's live organ harvesting is far worse than the Nazi's crimes in World War II. It still occurs in current China under the Party control.” He called for more people to withdraw from the Party for a better future.

The Falun Gong practitioners held a march after the rally. The march was led by the Divine Land Marching Band. It started from the King's Playground and passed by busy shopping areas in Causeway Bay, Wan Chai, Admiralty and Central. Many spectators including large numbers of Chinese tourists from the mainland watched the march.