(Minghui.org) Dr. Kong Qiuge, 67, from Urumqi passed away on October 22, 2014, at Urumqi Prison Hospital in Xinjiang. Her body is being kept at the hospital morgue and her family is being closely monitored by the authorities. 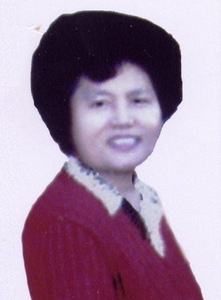 Dr. Kong was arrested by two dozen police officers on June 21, 2014, because she was a Falun Gong practitioner. Her home was ransacked. Immediately after she was arrested, Dr. Kong went on a hunger strike to protest the illegal arrest. Officials from the Urumqi Public Security Bureau threatened her, saying that they would not release her even if she died.

Her condition deteriorated rapidly over the following 20 days and she was near death. She was taken to Urumqi Prison Hospital.

Dr. Kong was bedridden and her life was sustained by an IV drip. She became emaciated less than two months after her arrest. She had become incontinent and almost blind. She couldn't walk.

Dr. Kong was chained to a hospital bed with heavy shackles. Her daughter questioned the police about the shackles: “My mother cannot even get out of bed; why do you still chain her?” They replied that it was a hassle to put on and take off the shackles, so they simply left them on.

Dr. Kong's family asked that she be transferred to an outside hospital or be released on medical parole. Li Xiaopeng and Bai Yucheng, officers from the Urumqi Police Department, who were in charge of Dr. Kong's case, refused the family's requests.

The police wanted Dr. Kong to provide the names of other practitioners, especially those who supplied her with Falun Gong informational materials. They threatened to never release her and they forbade any family visits.

Dr. Kong's condition further deteriorated in September. She had stomach atrophy and kidney failure. Li Xiaopeng and Bai Yucheng submitted her case to the city's procuratorate.

Dr. Kong started to vomit blood on October 16, 2014. Her family was finally permitted to visit her and bring her something to eat. Bai Yucheng accused Dr. Kong of pretending to be ill, even after she lost consciousness.

Dr. Kong's family was told to bring her food on the evening of October 21. There was no sign of life and her body was cold. Her daughter wanted to stay with her mother but was not allowed.

The police called at 1:30 a.m. on October 22, claiming that Dr. Kong was dying and asked the family to come immediately. She was in the emergency room. Her pupils were dilated and they had put her on a ventilator.

At 2 a.m., Li Xiaopeng and another officer demanded that Dr. Kong's eldest daughter sign the “bail notice,” which she refused to do, as the notice was clearly provided too late. The police called her second daughter, saying that they needed her to sign the notice because her older sister was not available.

Dr. Kong was pronounced dead at 6:55 a.m. The police demanded that the family sign the death certificate, but they refused.

Dr. Kong's body is still being held at the hospital. Her immediate family and other relatives' cellphones are being tapped, and Internet access at their homes has been cut off. Plainclothes officers are stationed outside their homes.

Arrested Many Times Since 1999

Dr. Kong has suffered ongoing persecution since the onset of the repression of Falun Gong in 1999.

She was held for one day for doing the Falun Gong exercises in public in October 1999.

She was held for a month for going to Beijing to seek justice for Falun Gong in June 2000.

She was sentenced to forced labor for 18 months for going to Beijing again to speak up for Falun Gong in July 2000.

She was held for 33 days for distributing informational materials about Falun Gong in September 2009.

Life has been extremely difficult for Dr. Kong after the persecution intensified in 2001. Local police monitored her and her family on any sensitive dates. She had to leave home many times in order to avoid arrest. Because of the ongoing persecution and threats against her, she could not take care of her 90-year-old father and her husband. Her father passed away in 2012.

In November 2013, Dr. Kong was held for another 45 days for distributing informational materials about Falun Gong.

“An Understanding of How We Should Handle Lawsuits and Legal Defense”