(Minghui.org) Today's news from China includes incidents of persecution that took place in 9 cities or counties in 8 provinces. According to this report, 10 Falun Gong practitioners were subjected to mistreatment during their detention, and at least 10 practitioners were illegally arrested. 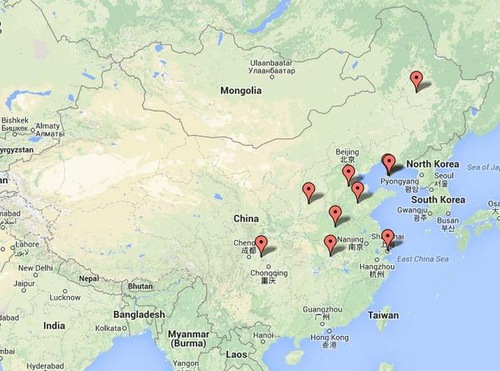 Ms. Zhang Chaoying, in her 30s, was arrested at home in the presence of her seven-year-old daughter by officers from the Yaodu District Police Department at noon on October 21, 2014. The police ransacked her home and confiscated a laptop computer, a picture of the founder of Falun Gong, and Falun Gong books.

Ms. Qi Cuiju, 70, was arrested and taken to the Chengxi Police Station in Laicheng District on the morning of October 20, 2014, for distributing informational materials about the persecution of Falun Gong.

She was taken to the Kuangshan Health Center at 9 p.m. and given a physical examination. The police then took her to a detention center. She was held at that detention center for two days without meals.

Officers from the police station ransacked her home but did not find anything they could use as evidence against her. Therefore, she was released on October 21, 2014.

Ms. Yang Huijuan was arrested again in the early October 2014, for talking to people about the persecution of Falun Gong. Her whereabouts is unknown.

Ms. Jiang Wangxian was arrested on October 21, 2014. Her whereabouts is unknown.

Eleven practitioners were arrested in Laomenglou Village by officers including Chen Weifeng from the Huaiyang County Domestic Security Division in the afternoon of June 24, 2014. Six were released.

Ms. Qi Fengzhi and Ms. Fan Yunlian are being held at the Zhoukou Detention Center and Mr. He Hongliang, Mr. Li Junqi, and Mr. Xia Zhongzhi are at the Huaiyang Detention Center.

Further information about the remaining six practitioners is not available.

Ms. Deng Yan, a teacher from the Renli Elementary School, was arrested at home by officers from Suining City on the evening of October 21, 2014. She was taken to the Yongxing Detention Center.

Ms. Hou Yayu, Ms. Han Naixiu, and two other practitioners were arrested on the morning of October 22, 2014, for sending righteous thoughts outside the Chengfeng Police Department. Four or five officers ransacked Ms. Hou's home that evening and confiscated a walkman and other personal items.

The judge, upholding the original verdicts on the three practitioners, sentenced the three to a five-year, four-year, and three-year prison term, respectively.

They refused to give the legal documents detailing the verdict to the practitioners families.

Mr. Wang Defa was arrested and taken to the Liaonan Newcomer Brigade in Liaoning Province on September 18, 2014.

Mr. Zhao Wanrong, Ms. Zhao Shuying, Ms. Zhang Yuemei, and Ms. Zhou Shujie were arrested at Daokou Village by officers from the Xiangya Town Police Station on October 19, 2014, for talking to people about the persecution of Falun Gong. They were taken to the Domestic Security Division of the Ningjin County Police Department and later transferred to the Dezhou City Detention Center by officers from the Domestic Security Division.

“Have a Mindset of a New Practitioner and Advance Diligently”