(Minghui.org) Police officers grabbed Ms. Wang Yanqin by the hair, bent her head back, and poured lighter fluid into her mouth. Then they lit it. When they released her from the torture session, needless to say, she could not eat or talk.

Burning is one of the cruelest ways to inflict pain on Falun Gong practitioners. The CCP has devised many horrendous methods to burn a victim's body: lit cigarettes, boiling liquid, and hot metal devices. Torturing a practitioner by fire causes tremendous, long-lasting pain and suffering.

A person will suffer second and third degree burns when exposed to a few seconds of to 140°F heat. The flame from a cigarette lighter can reach more than 1000 ºF. The victim will endure fourth degree burns that go down to their muscle and bone.

In cases of torture documented on the Minghui website, perpetrators used fire to burn practitioners everywhere on their bodies—face, hair, genitals, nipples, hands, and feet.

These six documented cases show the dire effects of torture by fire.

Police officers from Macheng, Hubei arrested Ms. Wang Huajun from a marketplace as she talked to people about Falun Gong on a morning in April, 2001. They beat and tortured her into the night. On the brink of death, Ms. Wang was taken to the front doors of the city's administration building close to midnight.

According to a janitor who witnessed the event, the police poured gasoline on her and lit it. She burned to death. Ms. Wang was 36. To explain what happened, police insisted she set herself on fire in an act of self-immolation.

This terrible act took place three months after state-run media broadcast the staged Tiananmen self-immolation hoax. Some police began to use the hoax as a way to cover up their crimes. 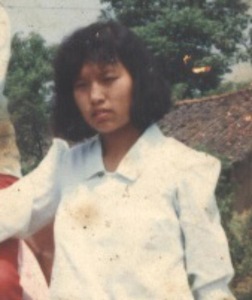 A guard at Harbin No. 7 Detention Center tried to sexually attack Ms. Xu Youqin and she strongly resisted. This did not sit well with the guard, so he used a cigarette lighter to burn her nipples. He tied her to a metal chair and shocked her with an electric baton.

After police arrested Beijing practitioner Mr. Xu Huaquan, they took him to Haidian Police Station. Several police officers pinned him down, and burned the left side of his chest using cigarette lighters. The torture left a palm-sized scar and his nipple was completely burned away.

At Wutongqiao Detention Center in Leshan, guards wrapped a practitioner's penis in paper and lit the paper. Du, the head of Leshan 610 Office, said to him: “This is a special treatment for Falun Gong practitioners!”

Police arrested Mr. Zhao Yonghua on January 3, 2001, and had him in handcuffs at the police station. Police then pushed him down into a corner and stomped on his chest until he could hardly breathe. Next, they burned his chest hair, beard, eyebrows, and pubic area with a cigarette lighter, causing tremendous pain.

Guards will sometimes use the opportunity to joke and mock their victims. Mr. Li Shouwo, 75, was tied to a tree in the yard of a police station. Zhang Xingang, the head of Pingshan 610 Office, said to five police officers who were present, “Let's burn him today!”

Each with a lighter in hand, they surrounded the helpless man and the torture began. One burned his hands, while another attacked his eyebrows and beard. A third person burned his hair, and two others burned him in other parts of his body with lit cigarettes.

As he shook from the pain, the officers laughed at him. “Isn't this fun? You really should appreciate the free haircut we are giving you!”

4. Burned to the Bone

Ms. Sang Chunlian, a practitioner from Shouguang, Shandong, was arrested on September 24, 2007. At Shouguang Police Department, Ms. Sang was forced to sit on the ground. The officers twisted her arms behind her back, slammed her face down, and stomped on her legs and feet.

An officer burned her arms and hands with a cigarette lighter. When it ran out of fluid, he grabbed another and continued to burn her with it. He gave special attention to her elbows; when the torture ended, so much flesh had been burned away that her bones were visible. 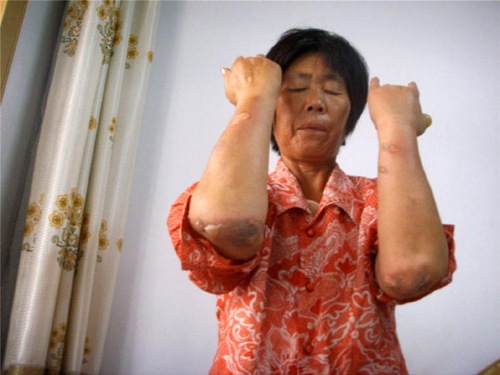 At various forced labor camps and police stations, practitioners repeatedly reported officials burning their hands and feet. Some practitioners' fingers blackened and flesh peeled off after the burning.

Some guards would tie a practitioner to a chair, insert paper between their fingers or toes, and then light the paper. Their skin would blacken and char as the paper burned.

At Shijiazhuang Forced Labor Camp, Mr. Wang Hongbin staunchly refused to give up his belief in Falun Gong, so guards burned his fingernails off.

Guards will sometimes target a practitioner's face for the fire torture, especially the chin, nose, and ears.

A female practitioner went to Beijing to appeal for Falun Gong in July 2001. She was arrested at Tiananmen Square and taken to Shengli Police Station. She refused to give her name and address when interrogated.

Police burned her lips, which created a large blister. They burned her fingers, and two of them were deformed as a result. She suffered extensive torture.

Mr. Fu Lianjun, a farmer in his 60s, was sentenced to four years by Hulan Prison in 2002 for practicing Falun Gong. Because he refused to give up his belief, guards burned his nose with a cigarette lighter, which left a big scar. This torture was only one among others, including being forced to stand up for seven days running and being deprived of sleep.

“Cultivating Xinxing and Saving Sentient Beings on My Path to Divinity”