(Minghui.org) Several thugs yanked Liang Zhenxing off the bed and stripped him naked before lashing him on the back with a whip. “Whipping people is such a tiring job!” exclaimed Gao Minglong after he became exhausted. Zhang Liwei took over, and he didn't stop until Liang passed out.

They laughed, looking at Liang's bleeding back. Gao claimed, “I hadn't beaten anyone for years. I had so much fun today! Whoever refuses to listen to me, come here and I'll teach you a lesson!”

The above is an eyewitness account of what happened to Mr. Liang Zhenxing (梁振兴) at Siping Prison in Jilin Province on June 29, 2008. Mr. Liang was one of the pioneers who risked their lives tapping into the Changchun City cable network to broadcast programs exposing the persecution of Falun Gong back in 2002.

According to the eyewitness, the guards never made any effort to stop the inmates from whipping Mr. Liang. He eventually died from the whipping and other torture in May of 2010. 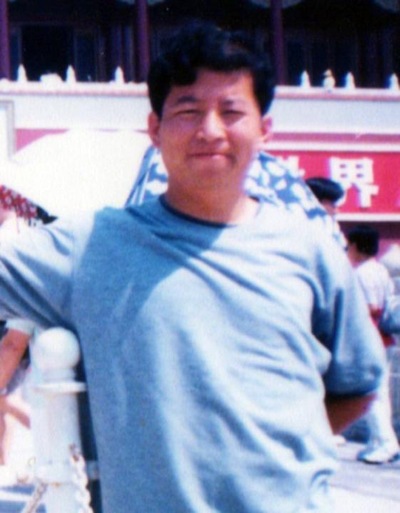 Mr. Liang Zhenxing: Before the Persecution 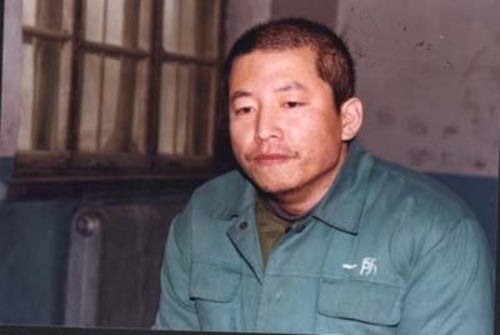 Mr. Liang at the detention center; blood was visible on the left side of his head.

About 1,400 miles away in Baiyin City, Gansu Province, a similar scene unfolded at a local police station in November 2002. Ms. Chen Jie (陈洁) was hung up and deprived of sleep, food, and water for three straight days, during which she was frequently whipped with wire.

Her blood dripped down to fill her shoe, before overflowing to the ground. Ten guards took turns whipping her and threatened to continue if she refused to disclose the source of materials exposing the persecution of Falun Gong found in her bag.

Whipping Falun Gong practitioners to inflict pain is one of the most commonly used torture methods in the Chinese Communist Party's attempts to make law-abiding citizens give up their belief.

According to reports collected by Minghui, whipping is used in all kinds of CCP detention facilities, including prisons, police stations, detention centers, brainwashing centers and the now defunct labor camps.

The whips are made of various materials, including, but not limited to, electrical wires, telephone cables, bamboo sticks, leather, and nylon ropes. Practitioners, both young and old, are subjected to this cruel torture. Sometimes the perpetrators use whipping as the main torture method in their attempts to weaken the practitioners' willpower, while other times they use whipping in conjunction with other methods.

Below we document a few cases in which whipping was used as the main torture technique to make practitioners suffer. 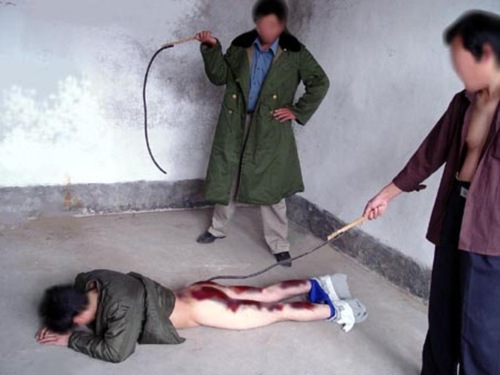 Incentivized by a cash reward of up to 10,000 yuan per “transformed” practitioner, guards at Hunan Province Women's Prison used all means possible to try to make practitioners give up their belief in Falun Gong. In particular, they targeted practitioners' eyes in their whipping torture.

They rubbed practitioners' eyes with balm and alcohol before whipping them with three nylon ropes twisted together.

For fear of being sacked from their jobs, guards at Mudanjiang Prison, Heilongjiang Province went all out to pressure practitioners to write the so-called “four statements” denouncing Falun Gong.

They stripped naked practitioners who refused to write the statements, and kept them in rooms with windows wide open during the winter months. They shocked the practitioners with electric batons, and also whipped them for hours on end.

Many practitioners could not endure the humiliation of being whipped naked and wrote the “four statements” against their will.

Such humiliation was not isolated in Mudanjiang Prison. More than one thousand miles away in Hebei Province, Mr. Li Zhenfang (李振芳) was also stripped of his clothes and flogged with a whip soaked with water. The stiff whip left him covered in bruises, and he had trouble walking after the ordeal.

Whipped on the Soles of the Feet

Ms. Chen Jinhua (陈金华), 73, was previously deputy director of Hesheng Town, Wenjiang District, Chengdu City, Sichuan Province. She once lost her voice after being injected with an unknown medicine at a brainwashing center.

Back in July 2000, she also suffered the whipping torture at the office of Huang Hongshi, deputy CCP secretary of Hesheng Town. Huang, along with two town managers, whipped her with three copper cables twisted together. She rolled on the ground as a result of the pain. Her wrist watch straps were broken, and her clothes were badly ripped.

Next they forced her to kneel on the floor and removed her socks. They whipped the soles of her feet, all the while shouting obscenities at her. She passed out several times, but was whipped again after she came to.

Her body was covered in bruises after over four hours of whipping. Her feet became swollen and she was rendered unable to walk.

Ms. Liu Xia (刘霞) was arrested in November 2001 for appealing for Falun Gong in Beijing. At Huaiyang Detention Center, guard Wu Quanzhong tied her hands behind her back and grabbed her hair to slam her against a closet. Guard Li Degong whipped her with a leather belt.

She went on hunger strike to protest, but was force-fed instead. To make her suffer even more, the guards restrained her in a way such that she could neither sit nor lie down. In the meantime, they whipped her frequently for more than 40 days. They didn't release her until she was on the verge of death. She was only skin and bones by the time her family picked her up.

Once a mental patient, Mr. Li Xinliang (李新良) from Donggang City, Liaoning Province, returned to normal after he began to practice Falun Gong. He was arrested on April 5, 2002 for sharing his experiences with other people and exposing the persecution of Falun Gong.

An officer surnamed Wang whipped Mr. Li during interrogation right in front of police chief Niu Chengyi, who looked on in silent assent. Wang kept whipping Mr. Li, even after he was taken back to the cell. Mr. Li spat out blood as a result of the continuous whipping. Wang didn't stop until he was exhausted.

Mr. Yang Lidong (杨立东), from Songyuan City, Jilin Province was whipped with thick metal wire while being held in Yinmahe Labor Camp in May 2002. He was bleeding from the wounds almost immediately.

He died two years after his release from the labor camp, at the age of 35.

Woman Whipped on the Buttocks and Hands

Guard Zhan Jianjun whipped her hard on her buttocks and hands. He also kicked her, causing excruciating pain. She moaned for several hours straight. Due to the injuries she sustained, she could not sit nor lie on her back. After she was whipped, she was handcuffed and shackled in a small cell.

Mr. Wei Youtong (魏有同) and his wife Liu Fengzhi (刘凤芝), both from Songgezhuang Township, Hebei Province, were brutalized after they refused to disclose information about other practitioners. Police chief Li Zhiguo handcuffed the couple to a radiator and beat them with a three-foot-long whip made of seven electrical wires. Mr. Wei had lines of lash marks on his back, and Ms. Liu bled from her back.

“Toronto: Celebrating the 10th Anniversary of the Nine Commentaries on the Communist Party”