Courage and Wisdom Come from Cultivation in Dafa (Part 3)

5. Spreading the Truth in China

"I had opportunities to meet practitioners from various regions. Young people, children and the elderly, we all shared with each other. They were so brave. They put everything down and came to Beijing. They stood out and petitioned even though they knew what the consequences would be. I did not return to Dalian. I remained in Beijing and contacted more Swedish practitioners and asked them if they could possibly come to Beijing. Chinese practitioners need our help."

A group of Swedish practitioners rushed to Beijing when they learned about the situation. They contacted the foreign press in China. American, Finnish, Swedish, and reporters from other countries came. They met with Chinese practitioners and reported the truth.

"In Beijing I stayed with English speaking Chinese practitioners. We changed our hotel often since we were followed and we often received strange harassing phone calls. We could feel the evil atmosphere everywhere. We finished our work nevertheless. Afterwards I returned to Dalian, and the Swedish practitioners went back to Sweden."

Soon Anne received secret information that a Fa experience sharing conference would take place in Guangzhou City, Guangdong Province. Anne did not know the situation in southern China and she wanted to find out. She immediately booked her airplane ticket.

"I flew to Guangzhou on October 21. I contacted a reporter from Swedish Daily News. I knew we needed overseas reporters to be present."

Anne arrived in Guangzhou in the morning. She stayed in a big house where more than a dozen practitioners who came from overseas were translating the experience sharing articles into English. In Guangzhou, the persecution had begun and police had started to arrest practitioners. Naively, Anne thought police would not arrest her because she was Swedish. She was listening to Master's lecture recording with her headphones on and waiting for more practitioners to come, when she suddenly noticed many people were in the house and they were smoking.

"I felt strange. Falun Gong practitioners don't smoke. I wondered why they were smoking. It took me a while to realize the house was filled with police. I wasn't able to get out."

The house was surrounded by police. There were many Falun Gong materials including books and paintings inside. Police ransacked the place and confiscated some personal belongings. Anne still thought, "They won't arrest me. I'm not Chinese."

Police rounded the practitioners up. One officer dragged Anne out and asked in broken English: "You, who is? Where come? Why you here?"

Anne did not answer.

Someone yelled, "Take her!"

Anne went back to the room to get her bag. She had just entered the room when someone grabbed her hand. A stack of money and something else were thrust into her hand.

A practitioner who came from Australia hurriedly whispered, "This is money donated for the Fa conference. Also a computer chip containing photos. Take them away! Quick!"

Sirens wailed. Anne was taken to a detention center. She held her bag tightly.

"What's your name? How did you know those people?" an officer demanded.

"I began to practice Falun Gong in 1995. It's a really good cultivation method," Anne said.

Suddenly shouting and sounds of people being beaten could be heard from the next room. The officer sitting opposite Anne didn't seem to be disturbed and continued to write his report.

When he finished writing, he pushed the report towards Anne, and yelled, "Sign it!"

"I don't understand what you wrote," Anne replied. She tore the report to pieces.

She was placed in a police car and taken to a high level hotel.

Anne still held her bag tightly. She thought, “It contains resources that belong to Dafa, and the police cannot take them.”

"What's in your bag? Open it and let us check!" barked an officer.

"No! I have to see a Swedish diplomat," Anne declared firmly.

She was put into a police car for the third time, this time she was taken to an even fancier hotel.

As soon as Anne entered the hotel, the police stepped away. Anne did not know why. She looked around. She was not sure if there were any plainclothes police around. Clutching the photo chip, she looked for an opportunity. The message has to be sent out, she thought.

She spotted a blond gentleman sitting in front of a computer. Anne walked over to him, and asked, "Excuse me, are you Swedish?"

"Of course you can!" The gentleman let Anne use his computer.

The photos and email were sent. Anne felt big relief. She needed to look for outside help to be rescued. She was able to make a phone connection.

The person on the phone said, "I'm a Finnish reporter. We've been looking for you! The Danish and Swedish Embassies have been informed!"

Anne was rescued. She was surrounded by reporters.

For quite a while after returning to Sweden, Anne still felt the "red terror" pressuring her and she was nervous.

"I felt I couldn't talk to others. The other Swedish practitioners hadn't experienced this. I simply couldn't relax. I was extremely paranoid in everything I did. I couldn't calm down and adapt to the environment in Sweden for a long time."

After what she experienced in China, Anne became braver and she had a stronger sense of responsibility. What was happening in China touched her. She and other overseas practitioners did a lot of work to call international society's attention to stop the CCP's persecution of Falun Gong. Anne thought that one day she would return to China.

In October 2001, several Swedish practitioners wanted to go to Beijing to help and they came to consult Anne.

They planned to hold the "Walk of Freedom" in Beijing on Tiananmen Square on November 21. They arrived in Beijing separately. Anne stayed at a university in Beijing. That day, she took a walk in the city which is both ancient and modern. She walked around the square and waited for the gathering. Tiananmen Square is one of China's iconic symbols, and it has witnessed many historical events. Anne gazed at it and thought, “It will witness our actions today!”

They quickly divided into two groups. The group in front sat on the ground and the back row stood. Everyone raised one palm. A big yellow banner was opened, on which was written three large Chinese characters: "Zhen Shan Ren" and the English words below: "Truth Compassion Tolerance". 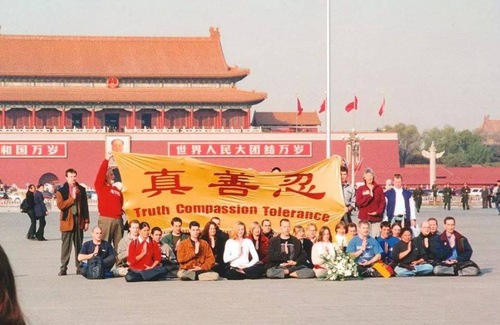 The tourists on the square were stunned. Soon after, ear-piercing sirens were heard and police officers came running towards them.

Anne was sitting in a double-lotus position. One palm raised in front of her chest, she did not open her eyes. She had been waiting for this day for a long time. There was so much she wanted to say. Here she was, telling the whole world, “Falun Dafa is good.” A police officer tried to drag her away, but he could not move her. She seemed to have been glued to the ground. Finally, two strong officers lifted her. Anne felt her body being thrown hard into a car. She could still hear the others shouting, "Falun Dafa is good". She opened her eyes and shouted too.

"I opened the car window and started to shout 'Falun Dafa is good!' The police were vicious. One of them pushed me down and kept my arms twisted. They beat us in the police vehicles."

All the Western practitioners who were at the square were taken to a police station.

"My arms were all bruised. They demanded our passports. I didn't give it to them. I would not tell them my name. We told each other that we needed to stay together. The police forced us into the basement. The stairs were very steep. There were many single cells with iron bars. Blood stains could be seen on the walls. We were forced into different cells," Anne recalled.

The practitioners knew their time there was precious, and every second counted. They kept telling the truth of Falun Gong to everyone as much as they could, to all the officers or the people monitoring them. The news of their detention was sent out, but no one came to rescue them. Police kept taking them from one location to another and kept interrogating them.

At last, a Swedish diplomat came. She said anxiously, "I looked for you everywhere! The police kept sending me to different places. They were tricking me! I finally guessed that you must have been close to the airport!"

It was less than 24 hours since the Western Falun Gong practitioners were detained. In Sweden, their protest and detention were headlined on the news. The main TV stations updated their progress every two hours during prime times. The fate of the practitioners touched thousands and thousands of viewers.

At Beijing International Airport, a plane scheduled to fly to Sweden sat waiting for a long time. All the passengers on the plane knew what happened. They waited quietly, praying. At last, the Swedish diplomat came. She stood at the boarding gate and checked each practitioner. She was relieved after confirming none of the practitioners was seriously injured.

The Swedish practitioners apologized to the captain and passengers for the long delay.

The captain said, "It's fine! It doesn't matter. We can go home now!"

The news of more than 30 Falun Gong practitioners from 12 countries protesting peacefully on Tiananmen Square made the international headlines for days afterwards.

After she returned to Sweden, Anne went back to her quiet life. People around her forgot that part of the history. She seldom mentions her past to others. Under her serene outward appearance, there lies her inner courage which comes from Falun Dafa.