Courage and Wisdom Come from Cultivation in Dafa (Part 2)

3. Clarifying the Facts to Media in Sweden

Anne started to learn Chinese at the University of Gothenburg after she returned home. She studied very hard so that she could read Dafa books in Chinese.

“At that time, I always felt that there were things I couldn't understand, such as special terms in Chinese. I gained a better understanding after I asked Chinese practitioners. I found the cultural connotations a bit harder to grasp, but it wasn't an issue, as we all cultivate according to the same principles of Truthfulness-Compassion-Forbearance. Through Fa study, I understood how to change and cultivate myself to improve my realm of thought.

"In July 1999, the Chinese Communist Party (CCP) started the persecution of Falun Gong. As soon as we heard, we went to Stockholm, where the CCP embassy is located. We gave our petition letter, which called on them to stop persecuting Falun Gong, to the CCP authorities.

"Our petition didn't make any difference. At that time, all the international media were broadcasting whatever information the CCP media fed them, all of which defamed and slandered Falun Gong. The CCP government also restricted all channels by which foreign reporters might be able to interview Falun Gong practitioners. We wondered what we should do. We felt we had to find ways to clarify the facts to the media and to expose the CCP's lies. Practitioners outside of China were doing what they could, and many practitioners from Sweden went to the US to make our voice heard in the international community.

“I was living in Stockholm at the time. We felt we had to contact the local media, such as Sweden TV and the Daily News, and let them know the facts about Falun Gong. Practitioners asked me if I could do it. I was a rather timid person at the time and felt uncomfortable speaking in public. However, for various reasons, no one else could do this. What should I do? I thought I would order myself to step forward. I would do it even if I was scared to death in front of the cameras! We needed to let people know the truth!”

Anne was first interviewed by a newspaper, then by Sweden TV. She told people the facts of Falun Gong and why Falun Dafa is so good.

“I sat on a sofa during the interview. Across from me sat a man who was against Falun Gong. There was also an expert on China. I reminded myself that I was a Falun Gong practitioner and there was nothing to be afraid of. I had to keep calm and tell people the facts. I was very pleased that I achieved that.”

Watching the program now, we can see that Anne was peaceful and calm throughout the interview. In the face of so many spectators, she was giving off a kind of energy – the energy of peace.

“I did my best, because I knew it was very important. Later, we did a lot of followup work and sent letters to prime ministers and politicians in different countries."

After Anne finished her studies at Stockholm University, her teacher encouraged Chinese language students to study further in China. She was hesitant to go, because Falun Gong was being persecuted in China and she had also exposed the CCP on TV. She wasn't sure if she would be accepted. She applied anyway. As it turned out she was not only accepted, but was also offered a full scholarship.

In August 1999, Anne arrived in Dalian, China. Things were different. She couldn't see the magnificent scenes of Dafa in the city anymore. There were no practice sites, and she couldn't find any fellow practitioners.

“I knew the situation was very bad and practitioners were being tortured. I had a thought before I arrived in China that, if I went, no matter where, I wanted to see with my own eyes what was going on.”

In Dalian, she could only study the Fa and practice the exercises on her own. The atmosphere was very forbidding, and she felt more and more lonely. She finally located several practitioners and learned that many had been arrested and imprisoned. The situation was a hundred times worse than she had been told overseas. She was very upset and wondered what she could do.

One night, Anne felt unwell and developed symptoms of “sickness.”

“I felt very uncomfortable that night, as if something was blocking my throat, and I couldn't sleep properly. The phone rang at around six or seven in the morning. I wondered who was calling me that early.”

“Anne, can you come to Beijing? It's very important. Please come quickly if you can. We need you to help with translation!” The fellow practitioner sounded very urgent.

Anne didn't hesitate. She asked for leave from her teacher and went to Beijing by train.

“I arrived in Beijing the next morning. It was very cold. Local practitioners lent me some warm clothes. We went to a few places to meet up with others. We also went to a hair salon run by a practitioner, so that she could tidy us up and make us look more presentable.”

Anne didn't know what was going on, but she knew it was something very important and she did her best to cooperate. When they arrived on the site, she learned that an international press conference would be held.

“Practitioners organized the press conference, even though they knew it was forbidden by the authorities. Still, they bravely stepped forward with no fear of revealing their identities. They were fully aware of the consequences, and yet they still courageously came forward to meet the foreign media. Everyone understood that they should dress properly for the occasion. I was deeply moved by everything I saw.”

When it was time, a banner was put up with the words “Mainland China Falun Dafa Press Conference” on it. Under the banner, was a Falun emblem and a portrait of Master. 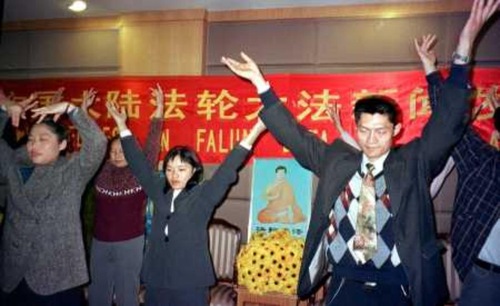 A reporter from Reuters was the first to arrive. He was eager to interview practitioners. Reporters from the Associated Press and the New York Times also came and interviewed practitioners, among them an 11-year-old child, police officers, and other practitioners from all walks of life. More than 30 practitioners attended the press conference. They risked their own lives to expose the brutal persecution of Falun Gong. All the reporters present were deeply moved by their bravery, courage, and unyielding spirit.

The press conference caused a big sensation in the international community and provided irrefutable evidence of the bloody persecution of Falun Gong by the Chinese Communist Party. The conference was held at the time when the then CCP leader Jiang Zemin had just lied that “Falun Gong practitioners were given 'spring breeze and gentle rain'-like care and education." The foreign media commented that the press conference in Beijing was a heavy blow to Jiang Zemin's face.

“I can never forget those fellow practitioners. I saw with my own eyes and heard with my own ears the facts about the persecution in China. I went to their home in Beijing. It was a very simple and crude house, with no indoor toilet or bathroom. The wind blew in from outside through the cracks and it was very cold inside.

"I was more saddened by what I saw next. There was a very pretty four-year-old girl with her hair in a braid. She was with her father. We had a meal together. She ate a lot as she was obviously very hungry. She was very happy and excited to be able to eat a nice warm meal. The little girl told me that her mom had been arrested and put in jail. She and her dad had come to Beijing to appeal.”

Anne later learned that several of practitioners at the conference were arrested, and interpreter Cai Mingtao and hairdresser Ding Yan died as a result of being persecuted.

“Torture Methods: Assaulting the Senses of Smell and Taste (Part 4 of 5) (Graphic Images)”