(Minghui.org) Nearly 6,000 Falun Gong (also known as Falun Dafa) practitioners gathered together at Liberty Square in Taipei, Taiwan on the morning of November 8, 2014. They sat together to form Chinese characters and the image of a heavenly being holding a copy of the foundational text of Falun Dafa, Zhuan Falun.

The characters, mentioned in Zhuan Falun, mean, “The Buddha-light illuminates everywhere and rectifies all abnormalities.”

After the elaborate character and image formation, the practitioners demonstrated the Falun Dafa exercises. This grand activity, as well as the informational posters that were displayed alongside, attracted the attention of local residents and tourists. Many people took photos of the event. 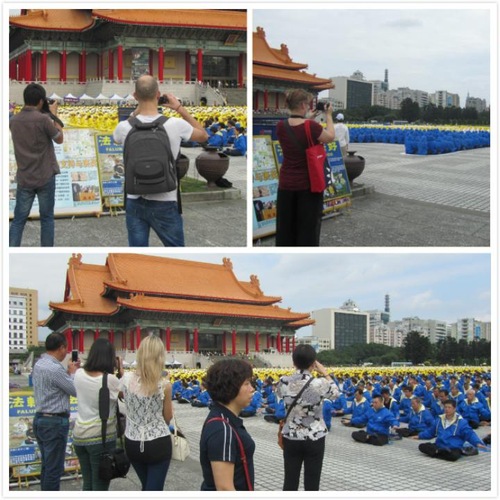 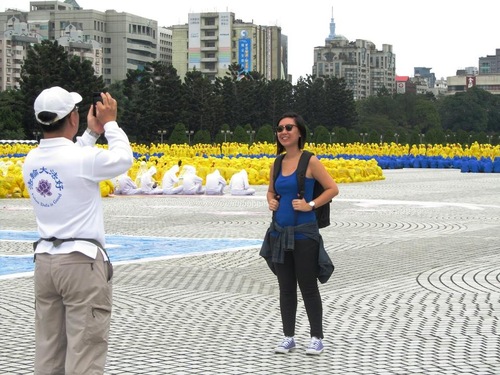 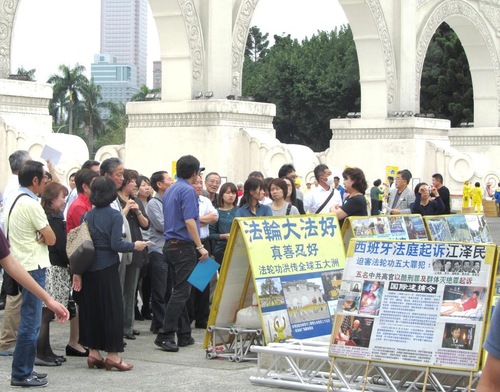 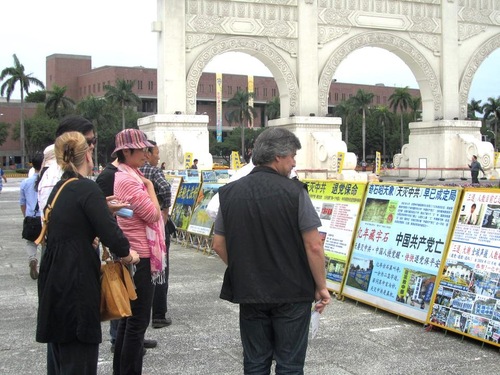 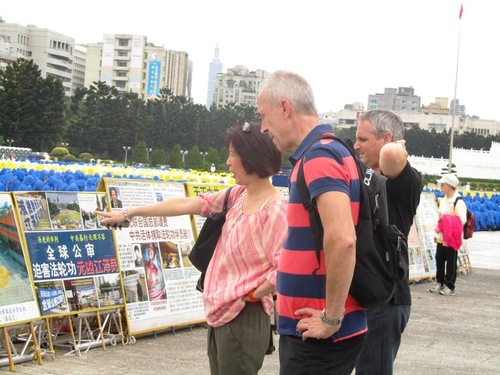 A Special Encounter with Falun Dafa at Liberty Square

Anne from Malaysia was glad to witness this grand event before she went home. She had never seen so many practitioners together in one place. She asked for fliers about Falun Dafa and expressed her interest in learning more about the practice.

Another woman from Malaysia and two Frenchmen came to Liberty Square together. They took a lot of photos of the formation from a higher location before they came over to read the posters. The woman translated the information on the posters for the two men and answered some of their questions about Falun Dafa.

About 100 Japanese tourists visited the square that day. The tour guide led them to the posters and translated the information for them. Many asked questions and took pictures.

A tour guide brought seven tourists from mainland China over to one of the posters. The guide told them that there were many Falun Dafa practitioners in Taiwan and that they often got together to form large-scale formations of images and characters. One of the Chinese tourists was surprised and said, “Wow, so many practitioners!” Since the persecution of Falun Dafa began in 1999, people in China have not been allowed to conduct any activities related to the practice.

Ms. Yang from Myanmar was touched to see so many practitioners get together to express their belief. Mr. Li from Singapore and Brbao from Germany were also excited to see this large-scale event.

Local resident Ms. Lin had tears in her eyes as she read the introduction to Falun Dafa. She said that she didn't know why she was crying, except that she felt really moved. Her friend Ms. Gong was upset about the Chinese regime launching such a brutal suppression of this peaceful spiritual movement. The two learned the meditation exercise with a practitioner.