Spain: Protesting China's Persecution of Falun Gong at the Chinese Embassy in Madrid

(Minghui.org) “We have been peacefully protesting the persecution of Falun Gong in China for over ten years. This persecution will some day be remembered as a shameful chapter in China's history. You work in the embassy and don't want to be scapegoats of the Chinese Communist Party (CCP). Please withdraw your membership from the Party.”

That was the message delivered via loudspeakers from the European Falun Dafa Association to the Chinese Embassy in Madrid, Spain, on October 3, 2014.

Hundreds of Falun Gong practitioners from 35 countries in Europe gathered in front of the embassy to raise awareness of the Chinese regime's persecution of Falun Gong. They called for efforts to bring Jiang Zemin and others involved in the persecution to justice. They also did the exercises together. 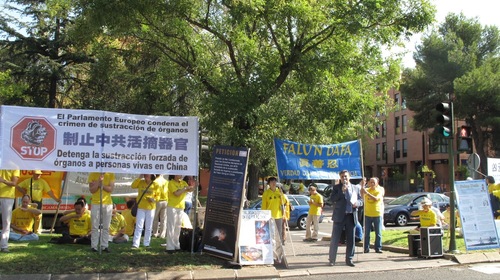 Mr. Carlos Iglesias, a lawyer in the lawsuit against Jiang Zemin (former head of the CCP) in Spain, spoke at the rally. 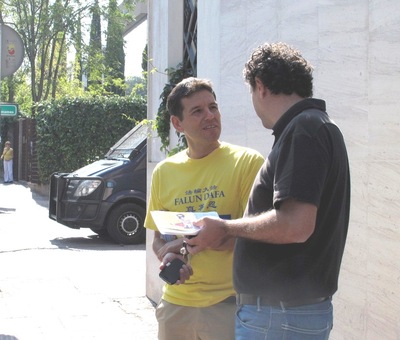 Explaining the facts about Falun Gong to a passerby 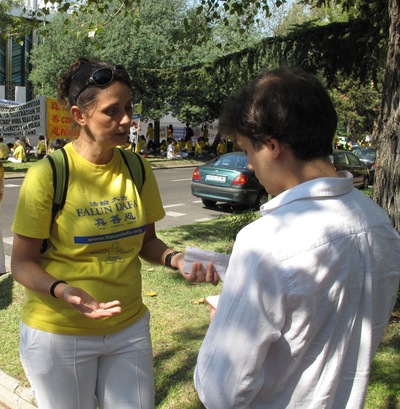 A reporter with a mainstream newspaper interviews a Falun Gong practitioner.

It was the first time that so many Falun Gong practitioners had gathered in Spain to raise awareness. After doing the exercises as a group in a public area, they held banners so that passersby, drivers, and passengers going in both directions could see them. Their banners read: “Truthfulness-Compassion-Forbearance,” “Falun Dafa Is great,” “Falun Dafa Is Practiced Worldwide,” “Stop the Persecution of Falun Gong,” “Stop the Chinese Communist Party's Live Organ Harvesting,” “The European Parliament Passes a Resolution Condemning the Party's Live Organ Harvesting.”

Several practitioners spoke in front of the embassy. They implored the embassy officials and staff to quit the CCP and its affiliated organizations for a better future. Other practitioners distributed flyers to passersby during the three-hour event.

A practitioner from the European Falun Dafa Association said, “The persecution of Falun Gong means not only that practitioners are detained, tortured, and imprisoned, but also that many have had their organs harvested while they were still alive. This is an unprecedented evil.” “You need to distinguish good from evil and follow your conscience. Please remember that Falun Dafa is good.”

Mr. Carlos Iglesias, a lawyer in Spain involved in the lawsuit against Jiang Zemin, the former head of the CCP, called on embassy officials to recognize that the international community, including the European Parliament, has condemned China's state-sanctioned policy of forced organ harvesting. He also called for bringing the culprits involved in the persecution to justice.

Reporters from El Mundo, the major newspaper in Spain, covered the event and interviewed practitioners. One reporter said that it was the most peaceful protest he had ever seen and that he was really impressed.

Many passersby paused to learn more about the persecution. Some signed the petition to condemn the Communist Party's live organ harvesting. An old couple living nearby read the banners carefully and told a practitioner, “We support you.” 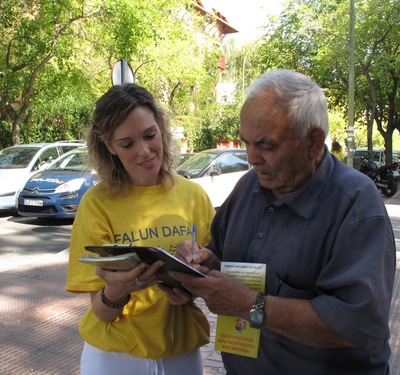 Mr. Moreno, a passerby, talked with a practitioner for some time. He said, “Everyone should be against the crime of live organ harvesting.” He signed the petition.

The several hundred Falun Gong practitioners in attendance shouted “Falun Dafa is great” a dozen times for all those in the Embassy to hear as the event drew to a close.