(Minghui.org) A Falun Gong practitioner in her fifties was arrested in 2000, in Jinzhou City, Liaoning Province. When Li Xiejiang from the Jinzhou 610 Office interrogated her, he handcuffed her arms behind her back for three hours, in a way that left her permanently disabled.

The practitioner recently recounted her ordeal.

Tortured and Interrogated for Six Days

Several police officers broke into my home and arrested me on October 25, 2000, and took me to the Domestic Security Division. They ordered me to provide information about local practitioners.

When I refused to comply, or answer their questions, two of them hit my feet, and verbally abused me. 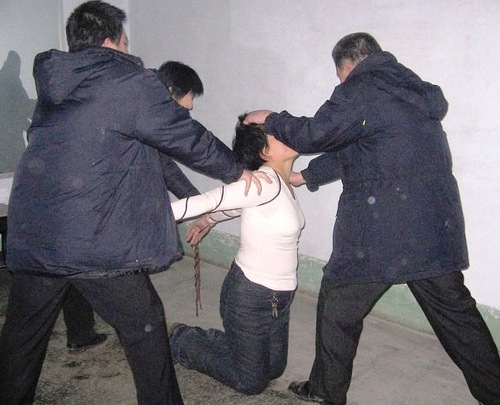 Torture reenactment: Tying with a rope

One officer grabbed my hair and hit my head against the wall. I passed out. They poured cold water over me, but I couldn't open my eyes. My head was swollen, and it felt like I was wearing a heavy metal helmet.

Another officer kicked my breast, and I lost consciousness again. They repeatedly poured cold water over me and continued beating me for more than eight hours. At midnight, they finally quit. I was transferred to a detention center at around 2:00 a.m.

During the next five days, two officers arrived early in the morning, took me to an unknown place, and interrogated me. I said nothing despite the continued beatings.

Not Giving In to Sentiment, and Remaining Steadfast

On the fourth day, the police brought my family to see me. They tried to use my feelings for them to get me to cooperate.

My sister was crying. She knelt down and kowtowed, trying to make me give in to the police demands. My 70-year-old uncle said, “Just tell them what you know. This is too much for you to bear.” My brother said, “We have worried about you constantly. I don't want to live under such pressure any longer.”

I felt their anguish, because my heart was broken, too. I held back my tears and said to them, “This is something where I can't compromise—I have to stand by my principles.”

An officer was going to hit me again, and my sister and brother cried, “We beg you to stop!”

My family returned home without having changed my mind.

Li Xiejiang (李协江), from the Jinzhou 610 Office, transferred me to the Domestic Security Division a month later.

He handcuffed my hands behind my back and inserted a glass bottle into the space between my arms and my back to tighten the cuffs.

Li said, “Most people's arms become disabled after an hour or two. No matter how strong you are, you will talk to me in the end.”

Torture illustration: Handcuffed behind the back with a bottle

He said, “We stayed up most of the night and worked on your case. Why don't you just tell me (the practitioners' names)?”

His cellphone then rang. It was his wife, asking him to come home. “The Falun Gong (practitioner) hasn't said anything yet.” “Torture her to death!” his wife responded.

Li and other officers beat me relentlessly. After an hour, my hands and arms were swollen and numb.

Li was an expert in torture. He grabbed my hands, and it felt as if my bones were being crushed. I kept sweating and vomited, but I would not surrender to their demands.

Li put a bowl between my feet. “I won't open the handcuffs--you can vomit into the bowl.”

He left me alone for a while, and when he returned, he grabbed my hair and pinched my chin, saying, “I've dealt with numerous cases and with all kinds of criminals over the past 20 years. I don't believe I can't make you talk.”

After three hours, I still remained silent. They finally opened the handcuffs before leaving for lunch. I lost consciousness.

When I woke up, I couldn't move my arms. Li knew that neither the prison nor the labor camp would accept me. They extorted 10,000 yuan from my family and released me.

I no longer could take care of myself.

During the 2001 Chinese New Year, staff from the Jinzhou 610 Office and officers from the Domestic Security Division came to my home, attempting to arrest me again. They left after realizing that I was bedridden.

Afraid that they might come back and take me again, my brother took me to his home. The police still harassed me every day, and I had to move again.

“People Are Searching for the Truth”