These two torture methods are different from burning with a hot iron, boiling water, and cigarettes in that they are usually applied for long periods of time, ranging from several hours to several days at a time.

Steaming and roasting don't inflict wounds as severe as the aforementioned torture methods, but the victims' suffering is still tremendous. In some cases, inmates ordered by guards to inflict the torture on Falun Gong practitioners succumbed to the extreme heat themselves. 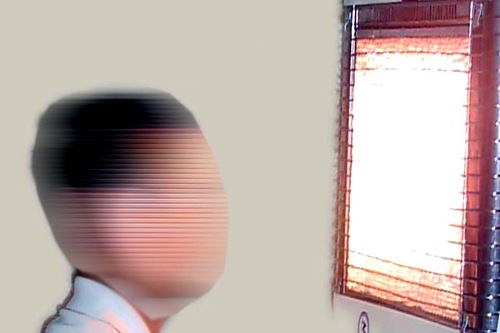 “The air was stifling...it felt like fire. My clothes were soaked in sweat. I gradually lost consciousness...”

“On the hottest summer days, I was locked in a cell for five days straight with all the doors and windows shut.”

“On a summer day when it was 38 degrees Celsius, all the doors and windows were shut. I was forced to wear the winter clothes I had on at the time of my arrest.”

“A 2,000-watt light bulb was placed about a foot away from my face. After a while, I was sweating profusely. The pain was unbearable.”

“I was forced to sit facing a 200-watt light bulb. My eyelids were parched and couldn't close properly.”

“I was pushed toward the boiler's opening. After my front was roasted, I was turned...”

“I was lifted and grilled over a fire until my back was blistered all over.”

“I was locked in a sealed cell on a hot day. Four heaters were turned on to roast me.”

“I was rolled up in a thick military blanket and left on the pavement under the scorching sun.”

Based on victims' personal accounts, steaming and roasting, as part of the CCP's brutal torture methods, can be categorized as follows:

A. Steaming in Sealed Rooms

On June 14, 2012, practitioner Wang Fafeng was taken to Linyi City Brainwashing Center. To force her to give up her practice of Falun Gong, guards put her in a cell with the door and windows shut for five days straight.

In 2005, practitioner Liu Guifu was detained in Beijing Women's Labor Camp. On a hot summer day with temperatures reaching 38C, guards and inmates closed the door and shut the windows. She was forced to wear her winter clothes. Many of the inmates, who were ordered to torture her, suffered heatstroke.

This category includes using high wattage light bulbs to heat the victim's head, soles and buttocks. Bright lights are also placed in front of the victim's face and eyes, while their metal chairs are heated from below.

Practitioners detained in a labor camp in Renhuai, Guizhou Province were locked in solitary confinement and forced to sit in front of 200-watt light bulbs until their eyelids were parched and could not close properly.

Jilin City police officers cuffed and shackled practitioners to metal chairs and put 2,000-watt light bulbs a foot away from their faces. After a long time, practitioners' faces would sweat profusely, and the burning pain was unbearable. 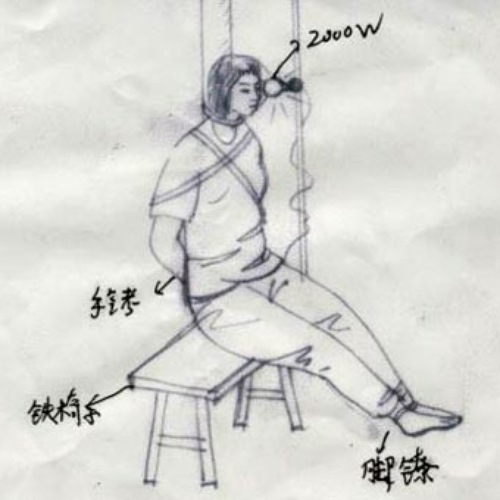 Authorities at the No. 3 Detention Center in Shuangyang District of Changchun tied practitioners to metal chairs and placed 2,000-watt electric heaters below, which made the chairs unbearably hot. At the same time, they put a bright light bulb on each side of practitioners' heads. This torture went on for a minimum of two hours.

This category includes burning the chin with candle flames, grilling over a fire, roasting in front of a furnace; burning with lit ropes for hours, burning the eyes with cigarettes, roasting at the kiln, etc.

Gaoyang Labor Camp in Hebei Province put practitioners on a rack directly over a fire. Practitioner Song Guixian and others were tortured this way, which resulted in blisters all over their backs.

In February 2002, Mr. and Mrs. Tian Xiaofei from Benxi District of Liaoning Province were arrested by Pingshan Police. They were hung on a wall with their legs spread and a high power electric heater placed between their legs. The temperature was so high that their pants were emitting smoke.

In February 2008, Huludao City Police and other government agencies arrested thirteen practitioners. Among the arrested practitioners, Mr. Yang Jiangwei and Ms. Li Xiaoming had married a month prior. The authorities used all kinds of means in their attempts to force Mr. Yang to give up his practice of Falun Gong, including sleep deprivation for three days and using electric heaters to burn his buttocks until the skin was charred.

In June 2012, staff at the No. 1 Shenyang Prison, under the direct leadership of warden Wang Bin, political instructor Liu Guoshan and deputy warden Qiu Guobin used electric heaters to burn practitioners all over their bodies.

On hot summer days, Falun Gong practitioners were forced to stand under the sun for extended periods of time. Details can be found in the article Prolonged Exposure to the Scorching Sun: a Form of Torture Employed by the Chinese Communist Party.

A. Practitioner Wang Yujie Locked in Furnace Room for 12 Hours 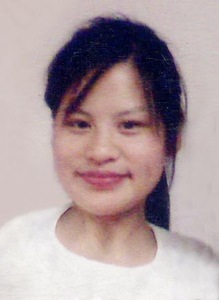 Practitioner Wang Yujie from Xiantao, Hubei Province was arrested by Manchun Police on March 11, 2010 and taken to Jianghan District's Erdaopeng Brainwashing Center. She was sentenced to one year of forced labor and assigned to the No. 6 Team at Hewan Labor Camp in Wuhan.

In order to force her to give up her practice, the labor camp authorities instigated inmates to torture her. They forced her to squat for six consecutive days, deprived her of sleep, beat her with electric batons, and forced her to do hard labor. On hot summer days, guard Hu Fang dragged Ms. Wang to the furnace room and locked her there for 12.5 hours. The high temperature caused her to sweat profusely and lose consciousness.

Mr. Shen Xiaodu is the grandson of the late Shen Junru, the founder of the China Democratic League. He was arrested and detained in the No. 6 Team in Xinhua Labor Camp in Mianyang, Sichuan Province. In August 2002, he was listed as a key target by the camp authorities.

One day, guards took him to the brick baking kiln in his underwear and forced him through the “cold gate” (a chamber held at around 40C), a “medium gate” (60C), and eventually the “fire gate” (80C). The guards ordered each inmate to hold a red-hot brick on Mr. Shen's body to burn him in the furnace chamber.

Normally, a worker must wear thick cotton clothes to insulate him from the extreme heat when he went into the chamber to pick up bricks. In addition, workers are limited to two minutes in the chamber per shift. However, Mr. Shen, in his 50s, was forced to suffer the extreme heat in his underwear. When the guards went to torture him in the same way the next day, they found severe blisters all over his body.