(Minghui.org) The kiln at the brickworks factory at the Fanjiatai Prison is maintained at a temperature above 70 degrees Celsius (about 160 Fahrenheit) all year long.

Falun Gong practitioner Liao Yuanhua (廖元华) was forced to take off his shoes and stand in the kiln on August 3, 2001. Mr. Liao could not stand still due to the intense heat, which would have been difficult to bear even for those in shoes.

The prison guards then stepped on his feet so he wouldn't move. He finally fell into a sitting position, but the guards weren't done yet. They proceeded to place red hot bricks under his body until he lost consciousness from the heat.

At a detention center in Chaoyang, Liaoning Province, the policemen tortured Mr. Gong Yongguo (宫永国) for not renouncing his belief in Falun Gong. In April 2001, they dumped boiling water on Mr. Gong's torso, an act that left him with severe burns that were still visible two years later. 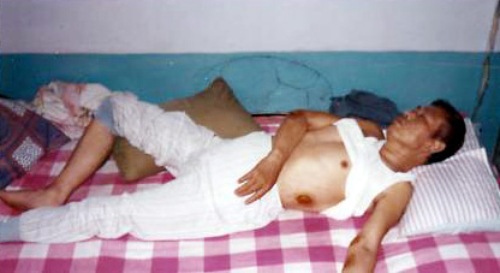 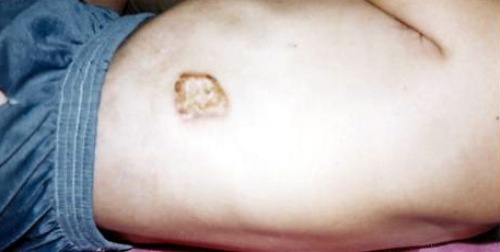 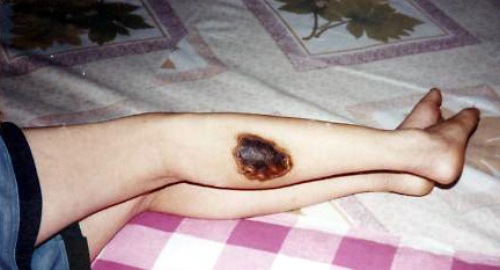 The wounds were still visible two years after the torture. The pictures above were taken in 2003.

The Chinese communist regime stops at nothing in their torture of Falun Gong practitioners – as long as they didn't give up their beliefs, any and all torture methods would be used on them. The Chinese police pride themselves on having “108 torture methods,” of which extreme heat is only one.

Torture with extreme heat can be broken down into two categories: methods that incorporate metal, and those that don't. Each of these categories also has a large variety of associated instruments and devices.

According to survivors, the metal instruments used include, but are not limited to, heated metal rods, heating radiators, metal pipes, iron plates, hooks for ovens, clothes irons, and needles with lit cigarettes at the end.

Non-metal torture instruments include burning coals, charcoal, electricity poles, bottles full of boiling water, and even the heated ground in the summertime.

Almost any part of the body can be burned – survivors have reported being burned on the head, face, forehead, mouth, tongue, ears, jaw, neck, shoulders, torso, chest, abdomen, nipples, back, lower back, rib area, arms, armpits, wrists, back of hands, palms, bottom, private parts, thighs, knees, legs, ankles, and at various acupuncture points all over the body.

Below are some actual accounts of torture in China's prisons using extreme heat.

A Rare Case of Escape

A Falun Gong practitioner who escaped from a Chinese labor camp found himself in a Houston hospital in 2001. Mr. Tan Yongjie (覃永洁) was later interviewed by the local TV station WB39, whose report is as follows:

“They [the labor camp guards] burned him. They pressed an iron rod into his leg twice, and told Mr. Tan, 'If you want us to stop, you better sign these documents [renouncing Falun Gong].' Refusing to comply, he never said a word the whole time, so they continued burning him. He was burned a total of thirteen times.”

Mr. Tan also told the station that he screamed while his legs were shaking violently. He also became incontinent due to the pain. The guards had left him for dead due to his severe injuries, and Mr. Tan was able to escape and arrive in Houston by way of Hong Kong and California. 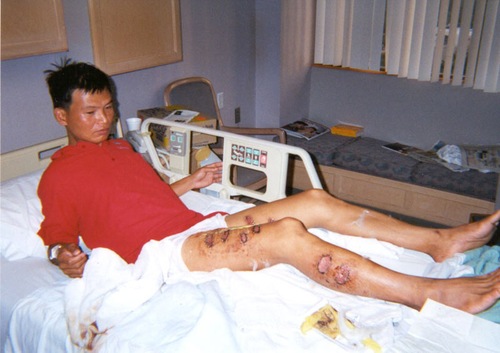 A Case of Mental Collapse

The labor camp guards burned the shoulders and back of Mr. Yan Shengliang (闫升亮) with an iron block on June 20, 2002, at the Xuchang No. 3 Forced Labor Camp. Mr. Yan was then dragged outside and forced to expose his burns to temperatures above 40 degree Celsius (104 Fahrenheit). As a result, Mr. Yan lost consciousness and was sent to a hospital for emergency care. He suffered from severe mental trauma which developed into dementia.

Mr. Liu Xifeng (刘喜峰) wrote in his personal account in a submission to Minghui.org: the policemen from the Shenzhen City National Security Bureau in Guangdong Province burned his face with high-powered lamps at an extralegal detention hostel.

“The lamp was extremely hot. I could hear the sizzling noise and the burnt smell when the bulb touched my face. The policeman had started with my nose, and then moved to my eyes and cheeks. Within a few minutes, I was burned beyond recognition.”

In May 2000, Domestic Security Division policewoman Xing Jianping (邢建萍) spread heated sand on the cement ground, and forced Falun Gong practitioner Jiang Xiuxiang to crawl over the coarse sand with her pants rolled up to the knees.

Ms. Jiang's knees bled and blistered immediately. Her pants were soaked in blood. She wouldn't ever be able to walk on her own after this torture.

At the Liyuzhuang Brainwashing Center in Hebei Province, Ms. He Xiuping (何秀苹), 49, was burned with honeycomb charcoals on her legs. She lost consciousness. She couldn't take care of herself and became mentally ill soon after.

Mr. Xiang Xulin (向绪林), a physician in Hunan Province, died on January 6, 2003 at the age of 56. According to sources at the Chishan Prison, he was tied to hot cement electricity poles in June. His organs were damaged as a result of the burning. 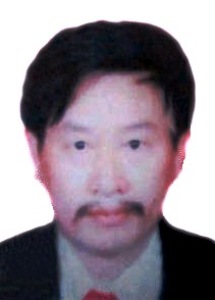 Survivor accounts such as what's listed above in this report are hard to collect, given the Chinese regime's information control. Still, they offer a glimpse of the atrocious human rights violations hidden behind the iron curtain.