(Minghui.org) Ms. Huang Jinfeng, a highly accomplished Tai Chi instructor in Taiwan, took up Falun Gong in March 2008. Seeing the positive changes in her that followed, seven more of her family members also began practicing over the course of five years.

Jinfeng's decision to take up Falun Gong didn't come easily – it took her two years. Although she enjoyed great renown and success in the martial arts field for many years, Tai Chi had become increasingly stressful. The field at her level was highly competitive, with many others trying to make a name for themselves.

In 2006, a friend suggested that she practice Falun Gong, but it was not until 2008 that she finally picked up the book Zhuan Falun. By this time, she had been diagnosed with depression and was looking for a way out. 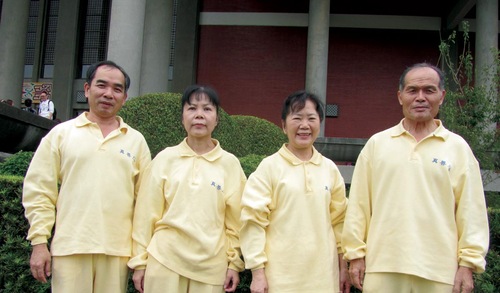 Jinfeng was a Tai Chi champion in county-level competitions. As a coach, she also led her team to many victories. Her team was top-notch and highly regarded by Tai Chi experts.

Although everything looked fine, she increasingly found Tai Chi to be a source of stress. It was not because she was not content with all of her accolades. It was the jealousy and competition among her peers, not to mention the constant pursuit of fame and fortune, that was making her more and more uncomfortable.

A friend told her: “You should try Falun Gong. It provides a pure and peaceful cultivation environment.” Her friend had practiced Tai Chi herself, but later took up Falun Gong, so she had some unique insight into Jinfeng's situation.

It was not easy to give up years of accomplishment and start anew. After wavering for two years, Jinfeng was diagnosed with depression. Her health began to deteriorate significantly. Neither Chinese nor Western medicine seemed to help.

In March 2008, at the recommendation of the same friend, Jinfeng began reading the book Zhuan Falun . She was very focused, even though she read slowly in her poor state of health at the time. Every word went into her heart.

As she read more, she realized that Falun Gong was indeed very good. She could not put the book down. She came to understand that Master Li Hongzhi, the founder of Falun Gong, explained the mysteries of the universe in plain language in his writings.

Whenever she had trouble sleeping due to her depression, Jinfeng studied the book and practiced the Falun Gong exercises. Soon, she was no longer troubled by insomnia. Her anxiety and depression disappeared. Within a few months, she become calm and emotionally stable. She had fully recovered.

Jinfeng continued to study the book and do the exercises every day and felt unprecedented relief and joy. Her husband also began practicing Falun Gong after a year of careful observation.

A Younger Sister Joins the Practice

Jinfeng's fifth younger sister, Jinying, had suffered from dizziness since childhood. She got dizzy when riding in vehicles or even walking. Jinfeng gave her a copy of Zhuan Falun .

Initially, Jinying would only read a few lines occasionally, just to be courteous to Jinfeng.

Jinying's problem got worse in August 2008. She went shopping with her daughter and felt so dizzy from walking that she wanted to vomit. Three days after this happened, Jinying went to a practice site in the Nuannuan District of Keelung City to practice the exercises and study the Falun Gong teachings.

On the way back to New Taipei City, a veteran practitioner shared his personal cultivation experiences with her. Jinying was touched and thought, “I didn't realize this practice was so good!” After she returned home, she realized that the pain in her hand was gone, and that she had not been the least bit dizzy during the two-hour bus ride.

“This so amazing!” she thought. She quickly took out Zhuan Falun and started reading it seriously. She thus became a genuine Falun Gong practitioner.

Jinlian, Jinfeng's second younger sister, was diagnosed with cancer and had a second surgery on her thyroid gland. Her husband was depressed because of her condition.

Jinfeng and Jinying recommended Falun Gong to her. During the Chinese New Year in February 2013, Jinying told Jinlian how wonderful Falun Gong was and the fact that when one person practices, the whole family benefits.

At her sister's urging, Jinlian started reading Zhuan Falun . The more she read, the more focused she became. She read Zhuan Falun three times in February 2013. While she was reading, she would call both her sisters, Jinfeng and Jinying, to discuss the parts that she did not understand or tests that she could not overcome on her own.

Jinlian slowly let go of her attachment to her disease. In the end, she didn't need another surgery or any medication. She is now in good health.

Jinlian's husband suffered from depression due to her critical health issues. In June 2013, he attended a Falun Gong nine-day seminar with his wife, and he, too, became a cultivator. His depression disappeared. Only slight insomnia still remains.

Jinlian felt very fortunate and often said to her sisters: “It is good that I listened to you and took up the practice. I can't imagine how my life would have turned out without Falun Gong!”

Jinying is a professional nanny. It is inevitable that the children are naughty and disobedient at times. Before she practiced Falun Gong, Jinying would sometimes scold the children when she was angry.

“You should educate children with reason so that you can really teach them well.” (Zhuan Falun)

She always uses soft, encouraging words to persuade the children patiently. At only 2 to 3 years old, they are nurtured and positively influenced by Falun Gong's principles of Truthfulness-Compassion-Forbearance.

The children Jinying has taken care of for some time are particularly easygoing. The parents often tell Jinying that their children often imitate how Jinying meditates when they are home. Some parents have told Jinying, “We are worry-free because you take care of our children.”

She and her husband used to quarrel over small matters, disrupting the family harmony. After she started practicing Falun Gong, Jinying would look inward to identify her own shortcomings whenever her husband was unhappy. She also gave up the habit of arguing with her husband. Gradually, there was less turmoil, and her family became life peaceful.

After Jinying had practiced for a year and a half, her husband said to her one day, “I want to start practicing Falun Gong, too.” She asked in surprise, “Really?” Her husband exclaimed, “Yes!” and accompanied her to the group practice site.

When she was a Tai Chi instructor, Jinfeng would always tell her clients that harmony brings wealth. However, she took her grievances and resentment home and vented them on her family. She also had high expectations for her children's schoolwork. When they did not meet her expectations, she would scold them. Fortunately, her husband was very tolerant and her children are obedient, so her bad mood did not lead to family turmoil.

After she began practicing Falun Gong, Jinfeng changed from within. When her daughter-in-law did something that she did not like, she first used the criteria of Truthfulness- Compassion-Forbearance to look inward and identify her own shortcomings.

Jinfeng then stopped complaining about her daughter-in-law. She felt calm and happy. Her environment changed, following the peace in her heart. Both her son and daughter-in-law were able to see the change. Thus, they encouraged Jinfeng's fourth-grade granddaughter to practice Falun Gong.

The guests at the wedding were also surprised at how young both Jinfeng and Jinying looked. “Why do you look so young?” some asked. The sisters told them with pride, “It is because we practice Falun Gong.”

“Growing Up in Dafa”