Mr. Zhang Jinku Near Death Due to Torture and Abuse in Detention

(Minghui.org) Falun Dafa practitioner Mr. Zhang Jinku of Boli County, Qitaihe City, Heilongjiang Province, is being held in Hulan Prison. Due to torture and mistreatment, he is disoriented and has lost bladder and bowel control. He has been transferred to the prison hospital, where he is on the verge of death.

Mr. Zhang was arrested by officers from the Yilan Police Department on March 29, 2013, and taken to the Yilan First Detention Center. Officer Yang Xinhua and others beat him, knocking out several teeth. He was forced to sit on an iron chair for 48 hours. Most people generally cannot stand more than two hours on such a chair.

The left side of Mr. Zhang's chest was injured, and his lungs became infected. He developed tuberculosis and was found to have two holes in his lungs. The detention center staff was afraid that he might die and released him on medical parole in April after extorting 10,000 yuan from his family.

Judge Zhang Anke of the Yilan Court and officers from the Sandaogang Police Station went to Sandaogang Township to arrest Mr. Zhang again on the morning of July 17. They took him to the Yilan First Detention Center and put him on trial the next day. Mr. Zhang's family did not have time to hire a lawyer.

Mr. Zhang pleaded not guilty. He stated that practicing Falun Gong was not a crime and further told the court that many officers had beaten him after his arrest. He said that his chest was injured and a few teeth were knocked out. He had many injuries and asked that he be compensated. He also said that all charges against him were false. He testified that the police held his finger and pressed his fingerprint on a document after he'd been beaten nearly unconscious.

Judge Zhang stopped him repeatedly to keep Mr. Zhang from defending himself and ignored the fact that the police used violence. He claimed that all information presented by Mr. Zhang was irrelevant to the case and sentenced him to five years in prison.

Mr. Zhang was held in the detention center for 33 days. He went on a hunger strike to protest the illegal detention. When he was on the verge of death, he was taken to the Yilan County Chinese Medicine Hospital. The police guarded him around the clock and family visits were not allowed. The police was afraid the public and his family would find that Mr. Zhang had been tortured and that he'd gone on a hunger strike in protest. But the information about his condition was leaked and widely circulated in the courts, police station, detention center, and the hospital.

Yilan County Court refused to provide information about Mr. Zhang's condition despite his family approaching the Yilan County Court, the Police Department, the Detention Center, and the Procuratorate. The family asked that he be released on medical parole. Instead, the police transferred him, on a stretcher, to Jiamusi Prison.

Force-fed and Transferred to Hulan Prison

The guard at Jiamusi Prison force-fed Mr. Zhang. The doctors said that, because he had been on a hunger strike for such a long time, the forced-feeding had to be done gradually. But, the prison guards force-fed him with an entire bottle of powered milk, causing extreme pain.

Mr. Zhang's hearing was impaired, he was dizzy, and his lower body was numb. He was very weak and lost control of his bladder and bowels.

Mr. Zhang was tortured again and then taken to the prison hospital. He has developed tuberculosis and is extremely weak. He cannot eat and is disoriented and on the verge of death.

Mr. Zhang's family went to Hulan Prison three times but were told that he had to renounce Falun Gong in order to see his family.

The family was finally allowed to see Mr. Zhang on October 21. By this time he could not walk unaided and two people had to hold him up. He was trembling and said feebly, “A guy in a white gown beat me...” The two helpers moved him in the direction of a chief guard before he could finish the sentence. The family worried about what the prison authorities were hiding. 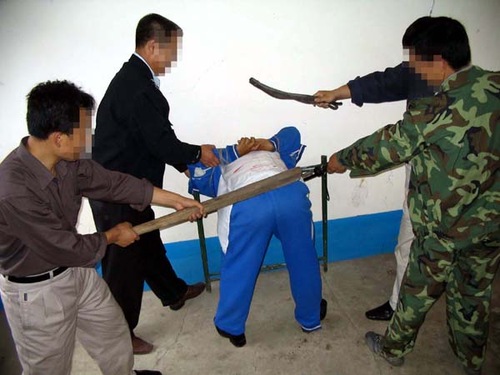 The family asked for the deputy warden’s name, but he and the rest of the guards refused to give their names.

A few minutes later, the deputy warden told the deputy manager of the correction department, Wang, to attend a meeting with Mr. Zhang's family. The 35-year-old Wang was responsible for “transforming” practitioners. He wanted to know the family's views on Falun Gong.

A family member replied, “Practitioners follow the principles of Truthfulness-Compassion-Forbearance. The world needs these principles.”

After leaving the prison, the family went to the Heilongjiang Province Prison Management Bureau. A staff member at the appeals office called Zhang Dongmei in the Hulan Prison and told her, “The family of Mr. Zhang Jinku, who is held in your prison, came to the appeals office. They said he is seriously ill and wanted him released for medical treatment. They also said that he was beaten in the prison. Why don’t you deal with it?” He then gave the family a phone number and told them to contact director Tang at Hulan Prison.

We ask for help to rescue Mr. Zhang, as well as all other Falun Gong practitioners illegally detained in China.