The CCP Has No Qualms in Spreading Lies about Falun Gong

(Minghui.org) The Chinese Communist Party (CCP) in Handan City, Hebei Province, recently initiated another round of Falun Gong defamation throughout government agencies including the Education and Health Departments, private enterprises, and community organizations. Those who understand how the CCP operates know that this is just another round of propaganda.

The CCP has been clamoring for a crackdown on Internet rumors since July 2013. The CCP itself actually promotes rumors constantly. In its continuing campaign against Falun Gong, the CCP lies and fabricates information on a regular basis. Below are some examples from Handan City.

Mr. Liu Yong was employed by Handan Iron and Steel Corporation. Influenced by the Party propaganda, his mother and the Party members where Mr. Liu worked had him sent to Baoding Mental Hospital in 2001, even though he was not mentally ill. He was given drugs intended to treat mental illness for 12 years.

Doctors at the hospital concluded after observing him for 12 years, “Liu Yong isn't psychotic. He meditates every day and helps other patients. The entire hospital recognizes that he is a good person.” Han, the principal of the hospital, personaly took Mr. Liu back to Handan Iron and Steel Corporation on July 13, 2013.

It is hard to imagine how Mr. Liu lived in a mental institution for 12 years and managed not to become psychotic himself. With a firm belief in Truthfulness-Compassion-Forbearance, Mr. Liu managed to return home a normal person.

Mr. Liu was arrested again at home on September 12, 2013. His mother and sister did not object, and he was taken to an unidentified mental hospital.

Mr. Liu obviously has no mental illness. Why do so many people believe the Party's allegations?

Mr. Yang Baochun was previously employed by JingHang Flannel Factory in Handan. Mr. Yang went to Beijing to petition the government for the right to practice Falun Gong in 1999, when he was 30. He was arrested, returned to Handan, and sent to the Handan Forced Labor Camp, where he was brutally tortured for two years. 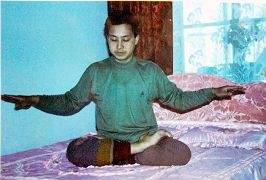 Yang Baochun meditating prior to the persecution

Labor camp guards threw away Mr. Yang's shoes in the winter of 2000 because he would not give up Falun Gong. They made him stand in the snow in his bare feet. After being brought inside, boiling water was poured on his feet. Frostbite and scalding burns caused severe ulcerations of his feet, and camp officials had to have him treated at a hospital. Eventually his right leg was amputated. 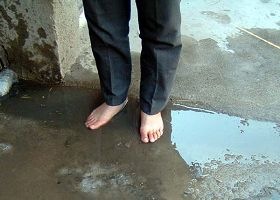 To avoid responsibility, Handan Forced Labor Camp officials spread rumors that Mr. Yang had mental illness. He was taken to Ankang Mental Hospital only two weeks after the amputation.

Mr. Yang Baochun was held in this mental hospital after he being tortured and becoming handicapped.

To turn Mr. Yang into a real “mental patient,” Wang Yubin, the head of Ankang Mental Hospital, along with nurse Feng Yongcai, often secretly added unidentified drugs to Mr. Yang's food. After he ate, Mr. Yang's mouth watered, his tongue became stiff to the point that he could not speak clearly, and he felt very weak.

Mr. Yang's mind was clear at first. He didn't want to stay in the mental hospital and tried to escape, so the doctors had someone keep an eye on him around the clock. He was dragged back to his room whenever he went outside, and he ended up with dark grinding scabs on his hips. He was also repeatedly beaten and struck with electric batons.

Mr. Yang eventually became mentally disordered. After his family got him out of the mental hospital, he was not mentally healthy. He often went outside, shouted, swore, and stirred up trouble. They returned him to Ankang Mental Hospital, and his wife divorced him in 2012.

Beaten by Her Husband Due to Police Lies

Ms. Ma Jinxiu was a Falun Gong practitioner in Guantao County in Handan. Officers from the county police department, Chengguan Police Station, and Chaibao Police Station broke in and arrested her, her non-practitioner husband, and their 12-year-old son in February 2005.

Ms. Ma was held at the Chengguan Police Station. Chen Peiyi, deputy director of the Guantao County Police Department and director of Chengguan Police Station, tried to get information out of her. He had a tiger bench moved into his office, tied her to it, and used a metal bar to tighten her bonds so that she could not move. He then added bricks one by one until she fainted from the pain.

Chen Peiyi and others tied her arms behind her back and pulled them up. When she did not give in, Chen shouted, “If you won't talk, we'll strip you and beat you!” Ms. Ma was later sent to Shijiazhuang Forced Labor Camp and held for three years.

Ms. Ma's husband, Xu Yanli, was also tortured. He was put on the tiger bench twice, held in shackles and handcuffs, and beaten until he was unable to breathe properly. 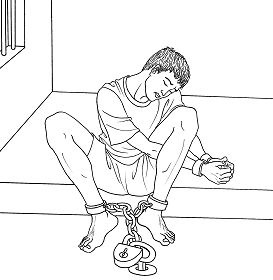 Chen Peiyi deliberately questioned Ms. Ma's integrity and belittled the couple's relationship while she was being held in the police station. He said to her husband, “Do you know that your wife had an affair?”

Mr. Xu believed what Chen said and got angry at his wife. After Ms. Ma returned home from the labor camp, her husband repeatedly interrogated her, argued with her, and beat her.

Persecution Based on Rumors, Slander, and Fabrication

The CCP has fabricated all sorts of rumors to justify and continue persecuting Falun Gong practitioners. These rumors and fabrications, if examined, can readily be discredited.

Since the communist regime started persecuting Falun Gong in 1999, people who didn't know the facts about Falun Gong have often said, “If Falun Gong practitioners hadn't encircled Zhongnanhai, the government wouldn't have persecuted them.”

Those who made such comments had been brainwashed by the Party propaganda. They didn't consider the possibility that the media was misinforming them, and they believed the statements discrediting Falun Gong. Their resulting fear, resentment, and hatred facilitated the ongoing persecution of Falun Gong practitioners.

Those who have read the Falun Gong books know that practitioners do not kill people nor do they commit suicide.

In order to stir up hatred towards Falun Gong worldwide, two hours after the self-immolation on Tiananmen Square on Chinese New Year Eve in 2001, CCP authorities alleged that the five people involved were Falun Gong practitioners. Of all the fabrications against Falun Gong made up by the CCP and its followers, the staged self-immolation on Tiananmen Square was the most despicable, and it confused millions of people.

A TV documentary produced soon after by overseas media, entitled, “Is It a Self-immolation or a Scam?” showed that the immolation was staged by the CCP.

The International Educational Development Committee condemned the CCP's “state terrorism” at a UN conference on August 14, 2001, and stated that based on the analysis of the video of the incident, the self-immolation on Tiananmen Square had been directed by the government. Given the evidence presented, the CCP delegation didn't refute this conclusion at the UN conference.

Over 150 million Chinese people have withdrawn from the CCP and its affiliated organizations.

Everyone has to make the choice between good and evil. Please don't believe the CCP rumors, lies, and fabrications.

“High School Student: “Falun Dafa Taught Me to Be a Good Person””