6. Thanks to Falun Gong, My Breast Was Restored

Upon learning of my desperate situation, an elderly practitioner I didn't know offered to have me stay with her and her husband for a few days. When we arrived at her place, I felt like lying down right away, but on second thought, I managed to sit up. I realized that she saw me as a cultivator, not a dying patient. As such, I had to behave like a genuine practitioner.

She asked me, “Do you want to read the book?” I agreed and flipped through a few pages of Zhuan Falun.

We lost electricity the second night and she asked if I wanted to practice the exercises instead. I was startled by her question. Didn't she see I was in such misery? I couldn't stop shaking, and could hardly get up, not to mention the excruciating pain in my swollen armpits and arms and the hollow where my breast had been.

At first I worried that the stretching involved in the exercises would make it worse, but soon came to see that they could only make things improve. After all, even when I was detained I never doubted Falun Gong, no matter how badly I was tortured. Why would I suddenly lose confidence in its miraculous healing power?

I decided nothing could stop me from doing the exercises.

The Magic of the Falun Gong Exercises

The first exercise requires stretching both arms and legs and is meant to open up all the energy channels in the body. I totally forgot about how weak I was and did my best to stretch my limbs.

I finished the four standing exercises in one try. My body felt like it had been charged and was full of energy. I could feel that each and every one of my particles and cells was changing rapidly. I truly experienced the state of “the mind and body join together.” (The Great Way of Spiritual Perfection)

The Fa permeated and comforted me. I no longer had sorrow or pain. My righteous thoughts transcended my physical body and my life. Faith was all that was on my mind.

I was completely renewed after the four exercises and the real me came back. All the tribulations I was going through suddenly felt so trivial and my swelling disappeared. I called out, “I'm fine now! The pain is gone!”

I seemed to hear Master saying in another dimension: “This is my student. I'll see who still dares to touch her anymore.”

The elderly practitioner was stunned by my sudden improvement. She couldn't believe that the swelling had subsided and my skin color returned to normal so quickly. She shouted to her husband, “Honey, come and see! This girl has recovered!”

Her husband was shocked to see me so transformed. Gone was the dying patient who could barely sit up. In front of his eyes was an energetic young woman who had no trouble walking or speaking.

He couldn't contain his excitement, “I was worried when my wife brought you home. What if you died here and your family came after me?! While the two of you were doing exercises in the other room, I was scared to death in this room. Now you have recovered just like that! Falun Gong is so miraculous! I would never have believed in its healing power had I not seen it with my own eyes!”

That night, the practitioner looked at my incision and was a bit concerned, “The big hole in the breast area is closing, but isn't there still some pus trapped inside?” She didn't know that it was regenerating both inside and outside. With new tissue growing on the inside, the diseased tissue got pushed aside.

In just three days I grew a whole new breast! This was beyond my wildest imagination. I was so fortunate! I owed it to Falun Gong that I had a healthy body and a life full of righteous thoughts!

I returned to my hometown of Acheng not long after. As a Falun Gong practitioner, I had to tell the world how the practice helped me recover again from a crippling disease.

My homecoming happened to be my father-in-law's 66th birthday, and our family had decided to throw him a big party at my home.

While on her way to my house, my mother-in-law got word from a friend, “Your daughter-in-law has come back--with a new breast!” She immediately responded, “No way! I wouldn't even imagine she could survive more than a month, let alone a new breast! I'll have to see it to believe it!”

When she finally saw me, she couldn't believe her eyes and kept saying that Falun Gong was so magical.

Once again I became the center of attention: “What happened to that breast cancer? The cancer disappeared with the old breast?” “Maybe she went to the hospital and got her problem fixed.” “No way. How could a hospital completely restore a breast in just a few weeks?”

More than 100 family members and friends attended the birthday party, and they were all amazed by Falun Gong's healing power. The friend who encouraged me to keep practicing Falun Gong shared my story with everyone she met, even including police officers. In her words, “How can you not believe it? I saw it with my own eyes!”

I became pregnant again in 2006 and gave birth to a healthy daughter the following March. I had trouble producing milk with my newly grown breast during the first few days, but everything soon returned to normal after I practiced the Falun Gong exercises. My new breast provided enough milk for my baby girl without any problem.

Though many people witnessed my incredible recovery from the crippling bone disease and the terminal breast cancer, the doctors who saw me were all puzzled by the same contradicting facts. On the one hand, all the modern equipment they used to diagnose me indicated clearly I still had the same old symptoms, while on the other they couldn't deny the fact that I had completely recovered.

I visited the Harbin Northern Necrosis Research Institute for the first time on February 6, 1999, and met the chief of the institute, Dr. Zhang Lianxi. He is a very honest man of medicine.

I visited his institute again in March 2000 and had another CT scan (see part 2). He was surprised that I was completely fine, though the CT scan still showed I had severe bone disease.

A young doctor proposed to record my case as an example of miraculous recovery at their institute, but Dr. Zhang objected, “No. She didn't recover because of our medical treatment. She recovered because of Falun Gong. It has nothing to do with us.”

Dr. Zhang was nervous when he saw me publish his full name in an online article I wrote about my recovery. He admitted that all I had written were facts but didn't want the whole world to know about him.

He felt much better when I told him how much I appreciated his encouragement when I was in despair.

When agents from the Heilongjiang Province Public Security Bureau saw my online article, they went to verify my case with Dr. Zhang. He described what had happened to me and showed them the two CT scans. The police couldn't contradict his statements and left him alone.

I visited the institute again in 2012 and Dr. Zhang gave me a third CT scan. It still showed the same necrosis symptoms.

The Provincial Hospital of Heilongjiang Province

I also visited Dr. Zhang Minglei at the Provincial Hospital of Heilongjiang Province. He had a question mark next to the word “necrosis” on my diagnosis, because he was baffled by two contradictory facts. The X-ray showed clearly I had symptoms of necrosis, but I could walk well without any trouble. He just couldn't figure out why. 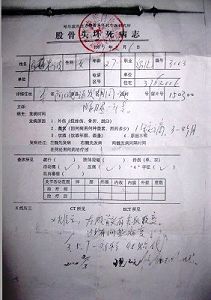 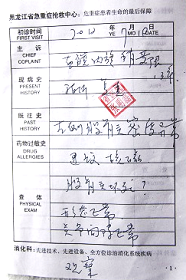 A copy of the necrosis diagnosis at the Provincial Hospital of Heilongjiang on July 10, 2012.

When I was working at a brick factory in 2005, a local doctor at a private clinic heard my story and insisted that I get another CT scan at the local district hospital.

After I had the scan at the Acheng District Hospital, I took it to a doctor there for review. When he saw me walk into his office, he asked, “Where is the patient?” I said, “Here.”

He didn't believe me and repeated his question, “I mean, 'Where is the patient who had this CT scan taken?'”

When I affirmed that it was me, he was really taken aback, “How did you recover?” I replied, “I practice Falun Gong.”

He put my scan into a bag and sent me off, “No need to go over your CT scan anymore. Just go home and continue practicing Falun Gong!”

I next went to show my scan to the doctor at the private clinic, and he finally believed in my recovery story. 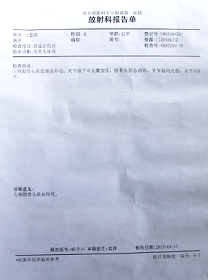 Around 2004 I worked as a housekeeper for a family in Harbin City and the husband, Wei Qingtang, happened to be the director of the CT Division at the hospital affiliated with the Harbin Medical University. He was considered an expert in his field.

When he saw me doing the housework, he commented, “You are so healthy.”

I explained to him how my practice of Falun Gong helped me fully recover from femoral head necrosis, but he was in disbelief, “I don't believe it. It must have been an erroneous diagnosis in the first place. How can necrosis be cured if it never happened? Your doctors were not that good.”

He told me all the doctors I had seen before were his students, and he offered to give me a CT scan to make sure the diagnosis was correct.

I indeed went to Dr. Wei's hospital on Sunday, and he did three CT scans of me. He was shocked by what he saw: “You do have necrosis, and it is very severe! You have lost half of your bones, but, strangely, the density of the remaining bones is very high. Your bones are very strong.”

He also pointed out, “Based on your CT scan results, you shouldn't be able to lift your legs.” I immediately raised a leg high to show him.

He exclaimed, “This is so unbelievable!” He had no answer as to why my CT scan showed necrosis but my remaining bones were very dense.

“Personally Experiencing the Horrors of the Qinglongshan Brainwashing Center”