(Minghui.org) Today's news from China includes incidents of persecution that took place in 9 cities or counties in 7 provinces. According to this report, 10 practitioners were subjected to mistreatment during their detention, and at least 9 practitioners were illegally arrested . 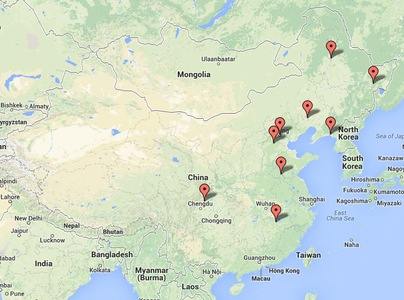 After Ms. Liu Tao was arrested in 2009, she was sentenced to six years in prison and detained at Sichuan Province Women's Prison. She was beaten and tortured brutally and was deprived of sleep for 24 days.

Ms. Su Lijuan was admitted to Sichuan Province Women's Prison in June, 2011. She was brutally beaten and cursed by other inmates. She was not allowed to use the toilet. She was forced to stand for long periods of time at night and was deprived of sleep.

Ms. Wang Shuyan, 55, went to Xinnong Township to clarify the facts about Falun Gong on the morning of December 14 . She was arrested and taken to the Dandong Detention Center.

Officers from the Baoding Domestic Security Division and Zhugezhuang Police Station broke into Ms. Bai Yun's home on the morning of December 17, 2013. They arrested her and ransacked her home.

Ms. Liu Hua and Ms. Si Yaolan were arrested on December 15, 2013, for speaking to people about Falun Gong in Tangma Township. They are being held in the Yutai County Detention Center.

Mr. Zhao Fugui was arrested by officers from the Yan Village Police Station in Fangshan on December 5, 2012. He was tried in the Fangshan Court on December 10, 2013, and sentenced to three years and six months.

Ms. Zhang Wei, Ms. Xiong, and Ms. Zhao were clarifying the truth at a bus stop on the morning of December 17. They were arrested by officers from the Wanli Police Department.

“Stories of Learning the Truth of Falun Dafa and Receiving Blessings”