(Minghui.org) Falun Gong practitioners from the U.K. gathered in Trafalgar Square, a key landmark in central London, on August 24, 2013, to expose the Chinese Communist Party's (CCP) crimes against humanity. They also held a signature campaign, calling for an end to the Party's practice of live organ harvesting from prisoners of conscience, the majority of whom are Falun Gong practitioners. 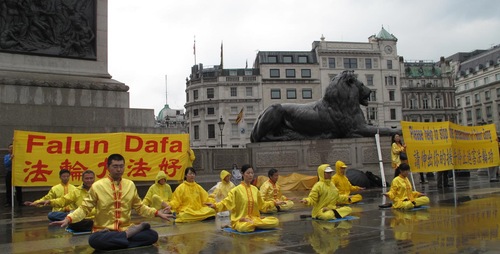 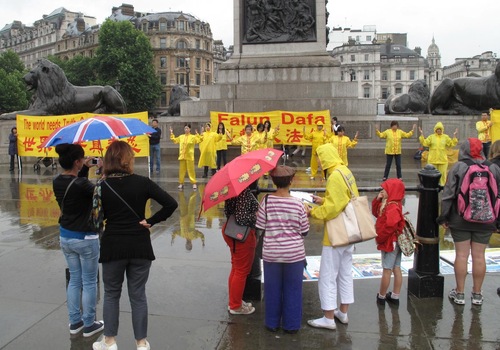 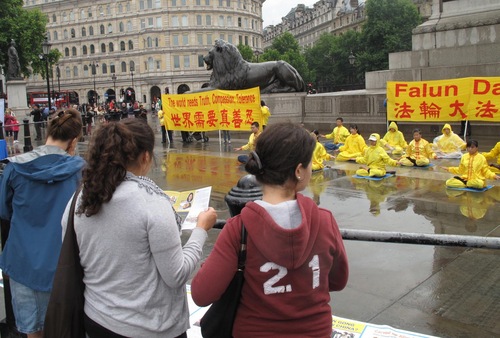 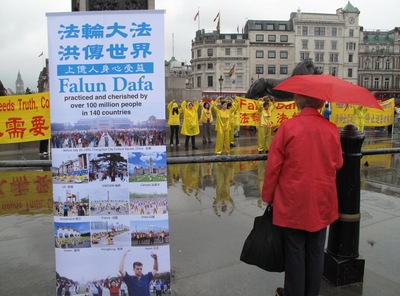 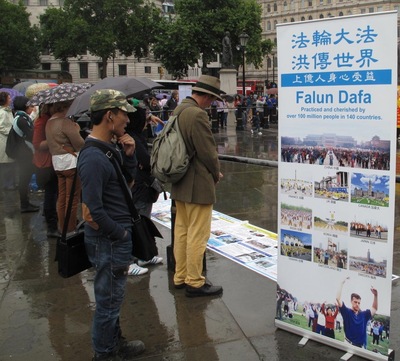 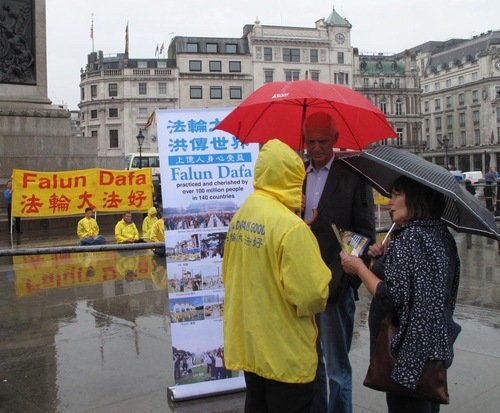 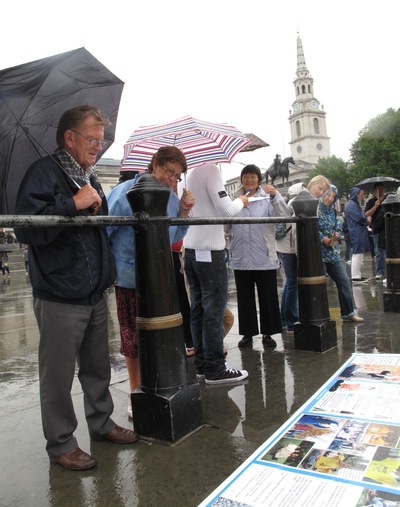 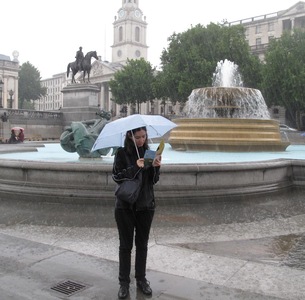 Intently reading a Falun Gong brochure in the rain

Many passersby were shocked to learn that the CCP has been profiting handsomely for over 14 years from the illegal and immoral practice of forced organ harvesting in China. A majority of these people signed a petition initiated by Doctors Against Forced Organ Harvesting Association (DAFOH), which calls on the United Nations to help end this human atrocity.

There were times throughout the day when entire families, groups of tourists, and friends signed the petition form. 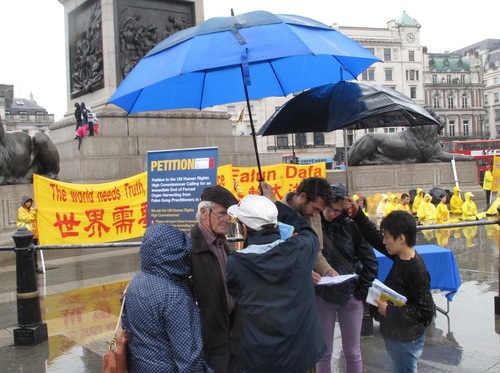 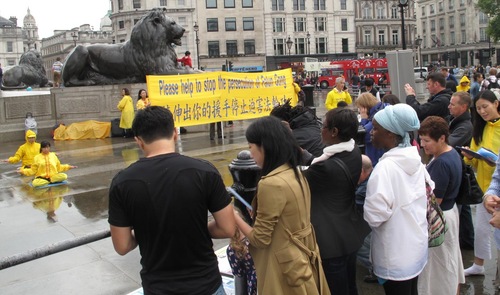 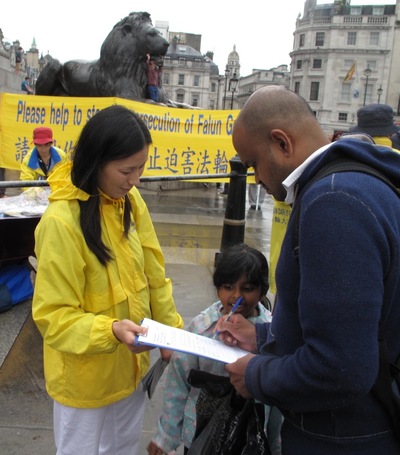 The practitioners set up three large banners reading "Falun Dafa is Good," "The World Needs Truthfulness-Compassion-Forbearance" and "Please Help Stop the Persecution of Falun Gong,” in both English and Chinese. They also demonstrated the five gentle Falun Gong exercises.

Many people were interested in learning more about Falun Gong, including how to do the exercises. 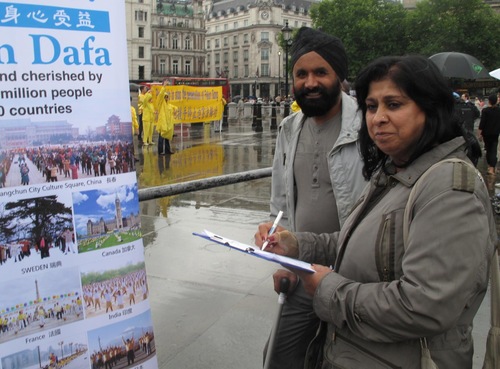 Mr. and Mrs. Kudi, who are of Indian descent, live in a small town near Birmingham. They were strolling through Trafalgar Square when they came across the practitioners' bright yellow banners and informational display boards.

They told a practitioner that this was the first time they had heard about Falun Gong or the Chinese regime's forced organ harvesting. After signing the petition, they both had broad smiles on their faces.

Before leaving, Mr. and Mrs. Kudi said that mankind should never allow organ harvesting to exist. They also said that they were very fond of Chinese traditional culture, and that the practitioners' exercise uniforms were “extremely beautiful.” 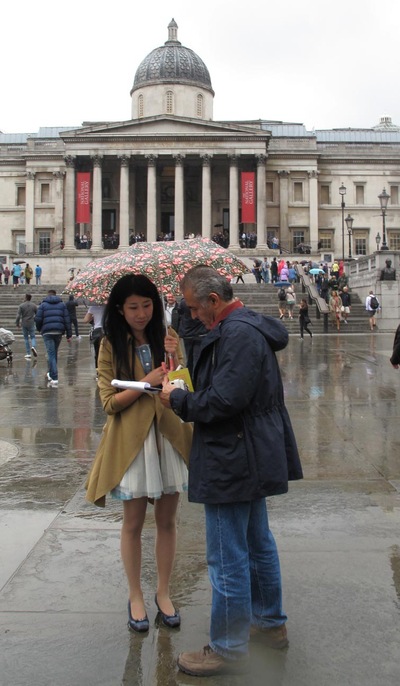 Mr. Hassan, from Turkey, signed the petition after a practitioner talked with him about Falun Gong. He said that he was absolutely opposed to the Chinese regime's practice of live organ harvesting.

He praised the calmness and peacefulness of the Dafa exercises and the practitioners’ unshakable determination to end the Party's persecution of Falun Gong. He said he felt that these crimes against humanity should be widely exposed to people around the world.

Ms. Chemette, who is of African descent, stood with her boyfriend, transfixed by the practitioners' exercise music and movements. When a practitioner told them that Falun Gong is being brutally persecuted in China, her French boyfriend said it was the first time he had heard about Falun Gong. Before they left, they both signed the petition. 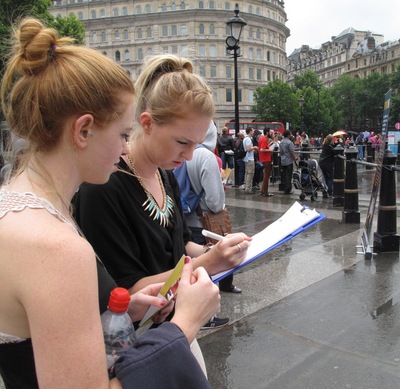 While several practitioners were demonstrating the exercises, Alicia and her friend Tracy started reading the display boards. Shortly after, they happily signed the petition. 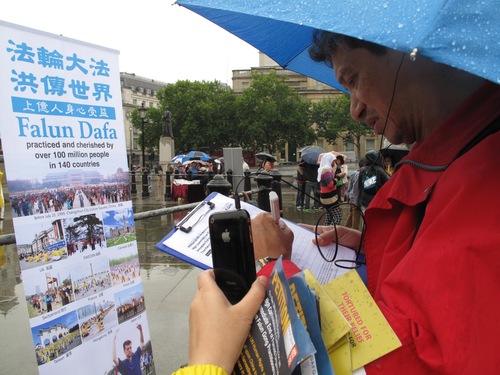 Antonio, who was visiting London from Brazil, stopped to read the poster, "Falun Dafa is Spreading Around the World."

After the practitioners told him about the persecution of Falun Gong in China, they asked if he would be interested in signing the DAFOH petition. Antonio said that he would first like to talk to his wife, Adriana, who was home in Brazil.

Using his smart phone screen, he filmed the practitioners clarifying the truth in Trafalgar Square and streamed the video to his wife, in real-time.

He then called over a practitioner and asked him to speak to his wife about the DAFOH signature campaign.

After the practitioner handed the phone back to Antonio, he spoke a few words to Adriana, then said, “My wife asked me to sign the petition form on her behalf, after I add my signature to the form.”

Antonio's wife asked him to obtain the Falun Dafa website address, as she wanted to visit it as soon as possible. Her phone conversation with the practitioner had made her very interested in learning more about the practice.

Michael, a London musician, happily signed the petition after hearing about the atrocities that the Chinese regime has committed relating to Falun Gong.

"This is a disgusting crime against humanity!” he exclaimed. “I’ll do whatever it takes to prevent this sort of thing from happening again. I had heard about the persecution, but I never could have imagined that such brutality was taking place in China. I thought such evilness ended when Hitler was defeated in World War II, 70 years ago!"

Michael praised the practitioners for using their time and resources to expose the Party's atrocities against Falun Gong.

"The tourists in Trafalgar Square are from all over the world,” he said. “This is the perfect place to expose the Chinese Communist Party. Only when people are well informed, will they be willing to take action.” 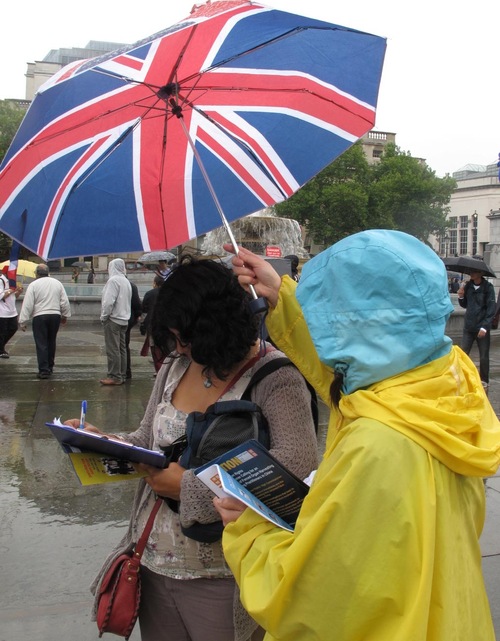 Ms. Hudson is a psychologist who lives on the outskirts of London. While passing through Trafalgar Square, she saw the practitioners performing the meditation exercise in the rain.

She was so moved by the peaceful expressions on the practitioners' faces that she took a photo of them, to capture the moment. After a brief talk with the practitioners, she signed the petition form.

She was very clear about the Party's total disregard for human life and the rights of Chinese citizens.

“From a psychological point of view, I understand why the Party is afraid of Falun Gong, she said. "The peaceful meditation is very helpful for clearing the mind, which is exactly what the regime is afraid of. They're afraid of losing control over people's minds—their thoughts!

"Your spiritual practice is amazing! Here you are, quietly meditating in the pouring rain, smack in the middle of the hustle and bustle of Trafalgar Square!”

For years U.K. practitioners have been clarifying the truth every weekend near St. Martin-in-the-Fields, near Trafalgar Square.

In recent months, they've been gathering regularly in London's Chinatown to collect petition signatures and to encourage Chinese locals and tourists to withdraw from the CCP and its affiliated organizations.

““Think of Everyone as a Bad Person””

“The Unprincipled “Scientist” He Zuoxiu”