I used to have numerous illnesses, which added enormous pressure to my family mentally and financially. I lost hope and even considered suicide. I began practicing Falun Gong in 1994 and have steadfastly practiced ever since. My illnesses quickly disappeared without any treatment, so I haven't taken any medication for the last 18 years. Dafa renewed my life and improved my attitude.

The CCP had long been ready to persecute Falun Gong

Before July 20, 1999, the local police station asked our village instructor to give them the names of the Falun Gong practitioners in our village. The instructor was not aware that it was a plot. Later he realized that the CCP had been plotting to persecute Falun Gong.

On July 20, 1999, the deputy director and two officers, Feng Jiang and Zhang Guoqing, from the township police station came to our village and told us we were no longer allowed to do group exercises. The next night, they demanded that we hand over our Dafa books. I refused. They later told us to hand over our ID cards. I was forced to do that. They harassed us several more times after.

In the spring of 2000, the township police station director and deputy director called my husband and three fellow practitioners to the station. Their intent was to force us to “transform us,” so we clarified the truth to them. They told us, “We have no choice in the matter ourselves. It's orders from above.” My husband wasn't a cultivator, but knew Falun Dafa was good. He stated that he would not practice anymore so he was released.

The rest of us were transferred to the county detention center for "transformation." Fifteen days later, Feng Jiang threatened us again: “If you choose to 'transform,' you pay a 5000-yuan deposit. If you do not go to Beijing for a year, we will return the money to you, but you have to pay room and board for the days you stayed here.” I absolutely refused to "transform" and was held in the detention center for 45 days.

My husband and relatives came to visit and tried to persuade me to give up, so I clarified the truth to them further, but the warden screamed at me to stop. They later found Feng Jiang and asked him to release me. He extorted 5000 yuan from my family. We were very poor, and my husband had to borrow money to get me out.

Later we had to sell our house to repay the debt. We have been homeless ever since. Feng Jiang in the township police station is very active in persecuting Falun Gong practitioners in our village. He arrested us, took us to the detention center, and collected "evidence" to charge us. He cursed at me several times when he saw me, viciously slandered Dafa and Master, and refused to listen to the facts.

With the CCP persecution of Falun Dafa intensified, I went to Tiananmen Square and opened a banner that said, “Falun Dafa Is Good.” Two police officers immediately snatched my banner, then forced fellow practitioners and me into a police car. They arrested many practitioners that day. We were all taken to a large room. When we arrived, we saw a long cage next to a building. There were many practitioners of all ages lined up there, forced to squat, but not allowed to stand nor sit. The practitioners in our room began reciting the Fa. After darkness fell, the police took them by twos and threes to an unknown location.

Several fellow practitioners and I were sent to a police station in Beijing, but I do not know its name. Because I refused to tell them my address, three policemen stripped off my clothes, leaving me in only my underwear. They hung me up by my hands. Four officer shocked me with electric batons at the same time. They shocked my head, teeth, nipples, private area, hands, and legs. They also insulted me with obscenities. One of them said, “If you are against Jiang Zemin, I will kill you.”

Since I would not give in, they dragged me to the yard and hung me from a pole, with my feet not touching the ground. They hung me outside for a long time in the c old. Then they took me back to the room and hung me up again. They tortured me nonstop.

I smelled my scorched flesh and called Master's name over and over in my heart. They were so tired that they could hardly breathe. They wanted me to curse Master, so I told them about Dafa and the truth about the persecution. They refused to listen. They took turns torturing me non-stop and would not give me water. At about 9 p.m., I had reached my limit and told them my address.

I knew Master endured a great deal for me; if not, I would have died right there. The places they shocked me were all very sensitive. I also realized how shameless, sinister, ruthless and cruel the CCP is in how it treats its citizens. I was transferred to Liaoning Province Beijing Office. They took my 10 yuan that fell on the ground.

The next day, the director of the township police station and Feng Jiang took me back, admitting me to the County Detention Center. I was persecuted so severely that I was swollen all over and could not take care of myself. Fellow practitioners had to take care of me. The detention center physician looked at me and said, “Nothing serious, only a little wound.” This physician cursed whenever we clarified the truth of Dafa to him.

Three months later, since I refused to be "transformed," I was transferred to Masanjia Forced Labor Camp in Liaoning Province. I was in the second Battalion, 6th Detachment. Guard Qiu Ping was the leader. They started trying to brainwash me as soon as I got there. Several people took turns attempting to “transform” me. They quoted the Fa out of context and attempted to deceive me, trying every way possible day and night. They deprived me of sleep, and I was forced to stand or squat for long periods of time. They also mentally abused me.

The one who was most active in persecuting me was Qiu Ping. He ordered other inmates to beat me. When I first arrived, Qiu Ping tried to force me to read books that slandered Dafa, but I refused. He made me stand for long periods of time. Every morning he would abuse me in front of everyone in our detachment. I clarified the truth of Dafa to him and others who attempted to "transform me," but they refused to listen. I tried to treat them with compassion, but they continued persecuting me. I found an opportunity to write about my persecution experience and named Qiu Ping and his criminal acts. The situation changed some.

Later I was transferred to the 5th Detachment, with Yin in charge. I clarified the truth to her many times with kindness and encouraged her not to persecute Dafa practitioners. One day she required my presence in her office and tried to force me to "transform." I refused, so she put Master's picture on the floor and tried to make me step on it. Again I refused. Then she frantically dragged me by my feet, trying to make me. She did not succeed. At that point, she slapped me very hard on my face and kicked me.

Later they started another round of intensified persecution and took me to a different location. I was required to stand, holding the wheel for a long time, then I had to sit in full lotus for a long time. If I could not continue, then I had to "transform." I clarified the truth to them, but they wouldn't listen. They tortured me again for a long time, not allowing bathroom trips or sleep. I became delirious and incontinent, and I do not recall what happened next.

The long term mental and physical abuse took a toll on me and I became delirious, so it was easier for them to force me to write “statements.” When I came to my senses, I knew that was wrong and something that a Dafa practitioner should not do. I felt like the living dead.

I told the guards that I had made a mistake and that I would not "transform." When warden Su Jing came to our cell one night, I nullified all my statements in front of her and all the inmates. Su Jing extended my sentence three more months. I was there for a total of three years and three months. When I was released on February 3, 2004, I was in a confused state. I could not recognized my family members, and my memory was very poor.

When I was still in the labor camp, I could hear piercing screams in the middle of the night, due to guards torturing dedicated practitioners. Every firm Dafa practitioner had designated inmates monitoring them, even while they ate, cleaned, or went to the bathroom. Those not "transformed" were not allowed to contact each other or talk. The guards persecuted Dafa practitioners at will, used electric batons, solitary confinement, tiger benches, and sleep deprivation. They forced them to stand or squat for long period of times, beat and force-fed them, and more. 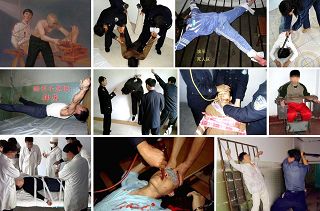 The thugs in the labor camp covered the head of a Dafa practitioner with a quilt, sat on her, and almost suffocated her. Another one was forced to sit on a bench for an entire year. When I was in the 5th Detachment, Li Xiaoyan, Wang Yan from Dalian, and I were in the same cell. Wang Yan refused to cooperate, so she was sent to solitary confinement many times. She began a hunger strike to protest. We later heard that she was either persecuted to death or sent to Dabei Prison.

We were all forced to do slave labor. When I was released, the local police department told my husband to sign a contract, forbidding me from promoting Falun Gong or going to Beijing, making my husband responsible for monitoring me.

They tried their best to persecute me on sensitive days. The village Party secretary, Jia Chunlou, and the township police went to my mother-in-law's home, searched for my husband's phone number, and asked whether I had gone to Beijing. After June 2006, the township police still called my husband to check on me.

Even recently, the CCP attempted to deny the crimes it has committed in torturing Falun Gong practitioners and slandered practitioners by pointing to the staged "self-immolations."

Justice will prevail. All the years of torture are deeply imprinted in my mind. Heaven and earth will not forgive the CCP for its crimes against Dafa. When heaven eliminates the CCP, it will be the fate that the CCP chose for itself.