(Minghui.org) As of April 28, 2013, among the 67 Falun Gong practitioners from Daqing persecuted to death, five were outstanding teachers. They died because they remained steadfast in their belief and conducted themselves according to Falun Gong's principles of Truthfulness-Compassion-Forbearance.

Mr. Bai Shuang, in his 50s, was a teacher at the Daqing Second Oil Production Plant Technical School. After the persecution started on July 20, 1999, he was repeatedly arrested and his home was ransacked. He was detained and tortured. Mr. Bai was taken to the Daqing Forced Labor Camp, where he died as a result of abuse. (Further details available at Mr. Bai Shuang Dies in Mudanjiang City Prison in Heilongjiang Province (Photo)) 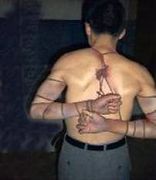 Torture reenactment: Tied up with rope 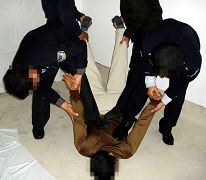 In December 2000, officers from Daqing Jianhua Police Station and Daqing Labor Camp, around 20 in all, climbed up to the second floor of Mr. Bai's home, broke the window, and entered. They arrested him, took him to a forced labor camp, and brutally beat him. They subjected Mr. Bai to a number of tortures, including tying him to an iron chair, tying him up with ropes, pouring cold water over him, and prolonged sleep deprivation.

In June 2003, shortly after Mr. Bai had been released from the labor camp, personnel from the Jianhua Police Station in Daqing knocked on his door. After Mr. Bai managed to escape, the police ransacked his home.

In January 15, 2010, Mr. Bai was arrested from his home by seven or eight officers from the East Lake Police Station, and his home was ransacked again. The police took three printers, computers, a large bag of truth-clarification materials, and CD-ROMs. Mr. Bai was arrested and taken to the Third Detention Center of Daqing. He was detained in Mudanjiang Prison on fabricated charges. Mr. Bai died on June 20, 2011, in Mudanjiang Prison as a result of severe abuse.

Ms. Gao Shuqin, 51, was an outstanding teacher at Daqing Twelfth School. After the persecution began in 1999, Ms. Gao was repeatedly detained, arrested, and sent to brainwashing centers and forced labor camps. Her home was ransacked four times. The school also took part in persecuting Ms. Gao and tried to force her to give up her belief by not allowing her to teach and suspending her pay. In detention, Ms. Gao was subjected to severe physical abuse, savage force-feeding, and a variety of tortures including being tied up with rope, the iron chair, and long-term sleep deprivation. (Further details available at Outstanding Teacher Dies as a Result of Persecution -Ms. Gao Shuqin, Practitioner from Daqing City (Photo)) 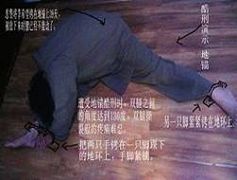 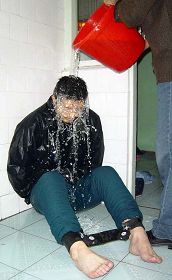 On June 4, 2000, Ms. Gao was arrested in Beijing when she went there to appeal for justice for Falun Gong. Three people from the Daqing Twelfth School took a plane to Beijing to pick her up. The travel expenses and fines amounted to over 10,000 yuan, and they made Ms. Gao pay for everything. She was then fired.

While she was detained in September 2003, Ms. Gao went on a hunger strike for more than 16 days and was on the edge of death several times. The labor camp was afraid of being held responsible for her condition so they authorized her release on medical bail.

Around November 25, 2003, Ms. Gao was arrested again by the Daqing City District Police Department and held in the Daqing City Detention Center. She was bound to an iron chair and was force-fed every day. She was finally released when she was in danger of dying. (Further details available at Outstanding Teacher from Daqing City Describes How She Has Been Persecuted)

On March 26, 2004, Ms. Gao's husband, Li Ling, went out to distribute truth-clarification materials and was arrested. When officers from the Ranghulu District Police Department came to ransack their home, Ms. Gao refused to open the door. In the middle of the night, the police brought someone to tamper with the door of her home so she couldn't get out. Even after she gave her neighbor a a key, the door could not be opened from the outside.

Around noon on March 27, in order to escape the police, Ms. Gao tried to use a bed sheet to climb down from the window. The sheet tore, and Ms. Bai fell and was critically injured. The police surrounded her and prepared to arrest her. The crowd that witnessed her falling and the subsequent police reaction urged the police to take her to a hospital immediately. The police made no move to call an ambulance and simply watched Ms. Gao lying there. When they finally did call for help, she was dead by the time the ambulance arrived.

On the day of Ms. Gao's funeral, her husband was still detained and had no idea that his wife had died. Their son was in college and their daughter was in graduate school. The only person at home was her 80-year-old mother-in-law.

Ms. Yang Yuhua, 46, was a teacher at Daqing Sixth School. On April 17, 2005, she was arrested at her home by officers Dai Feng, Tian Ye, Li Yijun, and others from the Tieren Police Station. She was taken to the Daqing Detention Center. The detention center officials, as well as prisoners instigated by the prison authorities, abused and tortured her. She was bound to an iron chair, beaten, and subjected to punitive forced-feeding. Ms. Yang died on May 12, within a month of being admitted to the detention center. 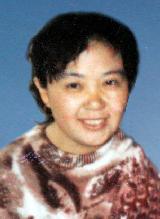 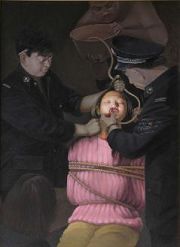 Tieren Police Station officers beat Ms. Yang so viciously that she was badly injured and could not eat. Detention center doctor Qi Hongjiang violently force-fed her. He pulled the feeding tube in and out of her nose, causing excruciating pain during the force-feeding. In her struggles to resist the painful force-feedings, she bit through seven feeding tubes. The head of the detention center even prepared metal tubes to force-feed her. One time, six men held Ms. Yang down while a tube as thick as a thumb was inserted through her nose into her stomach.

Ms. Yang was forced to sit in the iron chair for days on end. On May 12, she was so weak that she had no strength to struggle. Even so, the guards found four or five prisoners to hold her still and force-fed her for a long time. The prisoners also inserted a thumb-thick tube into her nose and shoved it back and forth, while four or five male prisoners held her down. They didn't stop until she was nearly dead. Ms. Yang was eventually sent to the Daqing Hospital, where she died.

4. Middle school teacher murdered the evening of his arrest

Mr. Wang used to have many illnesses. After he began practicing Falun Gong in 1997, he completely regained his health. He was well-regarded by his colleagues and had a happy family. However, on May 7, 2003, he was tortured to death by the police.

Mr. Wang Kemin was subjected to many forms of persecution.

Not long after the persecution started, Mr. Wang went to Beijing to appeal for justice. After he returned, he was forced into a three-day “brainwashing session” by the Babaixiang Police Station. Lin Shui extorted 700 yuan from him. He was also forced to pay a monthly deposit of 5,000 yuan.

In October 1999 when the police asked, “Will you still practice Falun Gong?” Mr. Wang replied, "Yes! I'm still practicing.” As a result, he was detained at the Babaixiang Police Station for 15 days. After he was released, Mr. Wang was taken to the Education and Training Center of the Daqing Petroleum Administration for brainwashing.

On February 27, 2000, Mr. Wang again went to Beijing to appeal for justice for Falun Gong. He was arrested and taken back to Daqing and detained for 45 days. In May, he was detained for a month in the 65th Middle School “brainwashing sessin” and was not allowed to go home.

In July, Wang Shuxiang, Communist Party secretary of the 65th Middle School, moved Mr. Wang to another brainwashing facility. Because he refused to write a guarantee statement not to practice Falun Gong and the Three Statements to slander Dafa, agents from the 610 Office colluded with the Babaixiang Police Station and took Mr. Wang to the Longfeng Detention Center. A month later he was transferred to the Honggang District Detention Center for another 15 days. Then he was taken to the Daqing Forced Labor Camp on September 27 for a one-year sentence. After he was released in 2001, Mr. Wang was held in custody by the school. To avoid further persecution, Mr. Wang left the area and had to move from place to place to avoid arrest.

On January 15, 2002, Mr. Wang took some truth-clarification materials to a fellow practitioner's home located in Wolitun. He was arrested by the local police and interrogated all night long. They bound him to an iron chair, handcuffed and shackled him, suffocated him with a plastic bag on his head, and sprayed pepper water into the eyes. Mr. Wang's nose was broken. To protest, he began a hunger strike. He was sent to the hospital when he was close to death. He was finally released with the help of fellow practitioners. (Further information Detailed Information about How the Daqing City Police Murdered Dafa Practitioner Wang Kemin (photos)) 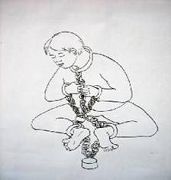 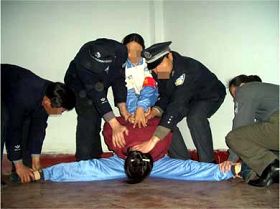 On November 27, 2002, Mr. Wang was arrested again by officers from the Sa District in Daqing when he was sending truth-clarification materials to practitioners in other cities. For six days and nights, the police exhausted all means interrogating him. Mr. Wang was severely injured, but with his righteous faith in Master and Dafa, he survived and recovered.

On November 27, 2002, the deputy head of the Sa District State Security Division boasted, “If Wang Kemin goes on a hunger strike, he would be dead. If he runs away, shoot him.” After these orders, the police planned to murder Mr. Wang. At the beginning of 2003, the police had been bent on arresting him, setting up ambushes in Daqing City, and even covering his hometown in Kedong County. The directive was: “You may kill him before you report him.” On May 7, 2003, the police discovered where Mr. Wang lived. He was arrested by the officers from the district, the 610 Office, and his school and killed that same night. His body was secretly cremated on May 11.

During the time that Mr. Wang was in the labor camp, his wife was terribly worried about him. Tragically, she died in a car accident while he was incarcerated. Another happy home was thus destroyed by the communist regime agents, leaving only the grandmother and their school-aged son.

Ms. Cui Xiaojuan, 40, was a senior teacher at the Daqing Police School. On July 22, 1999, she participated in a group appeal in front of the provincial administrative building. Later, she also went to Beijing to appeal for Falun Gong. She was arrested on Tiananmen Square and taken to Changping Detention Center in Beijing. She went on a hunger strike to protest and was subjected to torture and abuse many times. She was forced to stand out in the blazing sun for three days after a ten-day hunger strike. 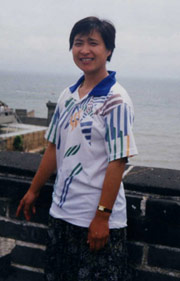 Ms. Cui Xiaojuan went to Tiananmen Square in Beijing to appeal after July 20, 1999 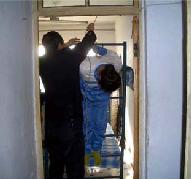 On December 30, 1999, because she posted a banner reading “Falun Dafa Is Good,” Ms. Cui was arrested again. On the way to the detention center, when she went home to change clothes, she tried to escape by jumping from the fifth floor. She was in a coma and later died in the hospital.

Ms. Cui's husband, Xu Xiangdong, former vice president of Yida Corporation in Daqing City Development District, was also detained because he refused to give up practicing Falun Gong. After his wife died, he was only allowed a glance at her body in the mortuary and quickly taken away. Two policemen stood next to him, one on each side, with their wrists cuffed to his, and another police officer behind. Mr. Xu was sentenced to 20 years in prison, leaving his elderly parents at home with no one to take care of them except his 13-year-old son.

“The Development of Lead Sentences in News Reporting ”