(Minghui.org) On September 22 2013, Falun Dafa practitioners of Sydney held a signature drive in Campsite, a Chinese community, to raise the awareness of the Chinese regime's forced organ harvesting crime. 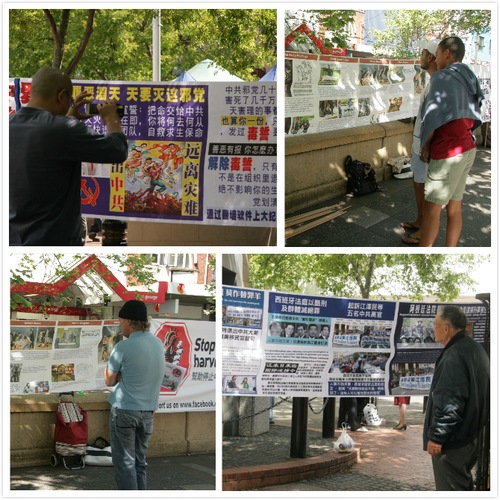 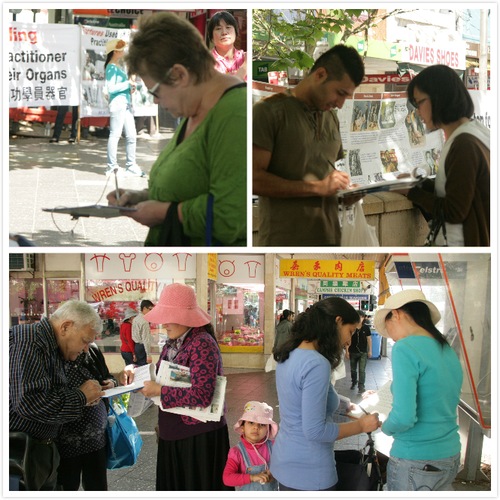 Mr. Monty Ferds looked at the torture illustrated on the banners and asked a practitioner, “Are those (tortures) real? Is this how the Chinese regime persecutes the Falun Gong? I knew the Chinese regime is notorious for abusing human rights, but I didn't know they were so bad.” When he learned that the Chinese Communist Party not only tortures the jailed Falun Gong practitioners, but also forcibly harvests their organs, he was shocked and immediately signed the petition form.

Ms. Rebecca Fortuna said that she believed that good people like Falun Gong practitioners should never be persecuted. When she learned that many hospitals in China are participating in a large scale forced organ harvesting, she said it was too cruel and inhuman. She said she would research more about it and asked her friends to sign on the forms too.

A man from northern China said, “I don't like the Chinese Communist Party because they are very evil. I believe that good and evil will always be rewarded. Long time ago when I was in China, I was an atheist, because I believed the Communist Party. Many years passed, and I recognized its true evil nature. It brainwashed Chinese people. I only realized the beauty of freedom and democracy after I came abroad. Now I go to church and believe that good and evil will always be duly rewarded. It was still scary to remember life under the Communist Party's rule. I support Falun Gong. You are brave and righteous.”

A Chinese couple came and immediately signed the form even before reading the banners. They said that every human being should sign the petition. The man said that the Chinese Communist Party is very evil.