Making Responsible Choices: The Path of an Entrepreneur

(Minghui.org) “We have to make choices in our life,” says Internet expert Chris Kitze. As an entrepreneur who has founded several IT companies in the past 20 years, Chris is keenly aware of the importance of making informed choices as well as the practical implications of the principles of karma.

Tracing the beginnings of his education in Eastern philosophy back to his high school days, his quest for spiritual truth and his business career have been closely intertwined. This has especially been the case in recent years, since he took up the practice of Falun Gong and began using his computer expertise to help people around the world learn the facts about the Chinese communist regime's brutal suppression of this traditional meditation practice. 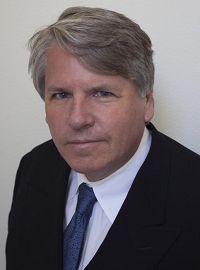 As Chris' career flourished, he was running several successful companies. He then took some time off, but after several years, he was inspired to launch two more internet companies.

One is an online media platform where users upload news and information to a platform for readers, who then can judge the objectivity of the news on their own. This platform often receives news about extraterrestrial and alternative news, or interesting individual experiences that are beyond the understanding of present day science.

The other company provides free, safe and private communications to enable people to access factual information, including information on the persecution of Falun Gong, the meaning of life, and the choices people have.

He said, “Without secure and private communications, how can people ever learn the truth on the internet? Without the truth, how can they make a good choice for their future, and this is really critical in a place like China.”

“Every day we make choices in our daily life, and every choice has a consequence. If we make bad choices, for example, speeding, that can cause a bad consequence, such as a car accident. The person who makes the choice should consider the consequence of that action.”

Driven by Conscience to Raise Awareness

However, sometimes making the right choice isn’t so easy. He gives an example, “If you know a product is produced by a sweat shop, would you buy that product or maybe choose to step up and protest that sweat shop? If you know organ harvesting is happening in China, would you choose to expose it? In addition to the impact this has on you, it could also impact many others.”

It is this sense of conscience that led Chris to start these two companies to spread awareness. He also takes it upon himself to go to Chinatown in San Francisco to inform Chinese people about the persecution of Falun Gong in China.

He says that the reason a lot of Chinese people have misunderstandings about Falun Gong is because they really don’t know the facts. “The kind of propaganda like that used in a country such as China can be very powerful. If people are exposed to a week of non-stop propaganda, they may not believe the sky is blue anymore. A lot of people in Chinatown are misled by the mainland Chinese propaganda.”

Perhaps due to his lifelong relationship with Eastern culture, Chris feels a certain kinship with Chinese people, and it disturbs him when he sees them being deceived into irrationally opposing Falun Gong and ignoring the persecution. He said, “What we can do in Chinatown is practice the gentle Qigong exercises, distribute flyers, make friends, and talk to people about the facts. There are many good people in Chinatown, and they deserve to know the truth.” 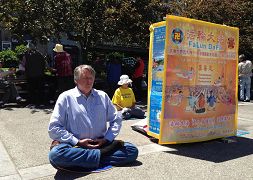 Connecting with the East

Upon learning Falun Gong, Chris could see how a series of events in his life had culminated in his seamless entrance into this ancient Chinese cultivation practice.

Born in a Christian family in 1959, he grew up in Boulder, Colorado. In high school, he joined a speed-reading class taught by the school's janitor, who was working on his PhD. One of the reading materials was “Siddhartha” by Hermann Hesse, a German writer. The story is about a son of a Brahmin seeking the meaning of life during the time of Shakyamuni. He finished the book in 15 minutes. He felt like he had been there, and experienced a special spiritual connection that he had never experienced in the churches he had attended. Not long after that, Chris got to know some students at a Buddhist school in Boulder where he learned some of the concepts of reincarnation.

In college, he attended a Chinese philosophy class. The professor’s parents were missionaries who lived in China before 1949, and he helped Chris understand traditional Chinese culture before it was sabotaged by the communist regime.

Chris read the entire Tao Te Ching by Laozi and other ancient texts that helped form an understanding of ancient Chinese culture. Later, he traveled to Japan and met some monks at the temples there and seriously considered returning there to study.

Chris decided to take a break from his companies in 2004, and was thinking of starting another business. He vacationed in New York with his two children, and when taking pictures in Times Square, he saw a group of Falun Gong practitioners doing the exercises. He felt the benevolence of their energy field. He knew about the persecution prior to the trip and from past experiences visiting communist countries, he figured that if the Chinese communist regime was against Falun Gong, it must be good.

Two years later he thought about meditation, but decided at that time to practice in another school. He did that practice for about a year, but didn’t think it was helpful. It was during this time that he remembered Falun Gong.

He finished reading Zhuan Falun , the main text of Falun Gong, in two weeks and decided to start practicing.

Before Chris started practicing Falun Gong, he often saw a circle rotating in front of his eyes. He thought something was wrong with his eyes, and so he checked with a doctor. After thorough examination, the doctor said his eyes were good. “My experience tells me that western medicine cannot always explain a lot of things.” Chris said Zhuan Falun shed light on this experience and addressed many other questions he had about life and the universe.

He saw the power of this book, which points out how to let go of human attachments and explains the essence of substances and the mysteries of the universe. He said, “As someone trained in engineering and the philosophy of science, I knew that science is not the ultimate truth and it is constantly revising itself. Sometimes it can have practical uses. Because of its approach, it will never be able to explain the core questions about life and the universe. Focusing on the heart and the essence of matter and personally experiencing it is an effective approach to finding answers.”

Practicing the meditation and the principles of Falun Gong brought significant changes. His marriage became much more harmonious, and upon seeing his changes, his wife and one of his daughters have also started practicing.

Chris says Falun Gong gives him a sense of peace like never before. At the same time, the ongoing persecution in China compels him into action. To him, his involvement in efforts to expose and stop the persecution is a natural expression of the universal principles of Truthfulness, Compassion and Forbearance. His conscience tells him it is the right thing to do.

“We Should Not Give Up on Trying to Save More People”

“Ms. Xia Xiuwen Imprisoned for Three and a Half Years for Broadcasting Truth Clarification Programs”