Mr. Zhang Jinku in Critical Condition Due to Persecution, Family Not Allowed to See Him

Mr. Zhang Jinku from Yilan County, Harbin City, is in critical condition due to the persecution in police custody and the Yilan No. 1 Detention Center. He has been sentenced to 5 years in prison.

Afraid of having to take the responsibility for his death, the detention center sent him to the Yilan Chinese Medicine Hospital for emergency treatment on August 19. Police are watching him around the clock and have not allowed his family to see him in the hospital.

Mr. Zhang's family has visited the detention center, police department, local court, and Procuratorate to request his release several times. All of their requests have been denied.

Arrested and Brutally Beaten by Police

Police from Yilan, Fangzheng, and Tonghe counties in Harbin illegally arrested nearly 50 Falun Gong practitioners in four days starting on March 29, 2013. Mr. Zhang was among them. He was detained at the Yilan No. 1 Detention Center.

In custody, Mr. Zhang was brutally beaten by officers Bai, Yang Xinhua, and others. Many of his teeth were knocked out, and his left rib cage was severely injured. The injury led to a lung infection, and later tuberculosis. As a result, Mr. Zhang became very weak.

In April, afraid of possible death, the detention center extorted 10,000 yuan from Mr. Zhang's family and then let them take him home for medical treatment. Hospital diagnosis confirmed that Mr. Zhang had tuberculosis and a punctured lung.

On the morning of July 17, 2013, Judge Zhang Anke from the Yilan Court ordered Sandaogang Police Station to arrest Mr. Zhang again. Police barged into his home in Sandaogang Town, arrested him, and detained him at the Yilan No. 1 Detention Center once again. His trial was scheduled for the next day.

The authorities didn't inform Mr. Zhang and his family about the trial in advance, as required by law. Therefore, Mr. Zhang's family didn't have time to hire an attorney to defend him.

Mr. Mo's family had hired two attorneys from Beijing to defend him. The attorneys argued against the claims of the prosecutor Ning Yan. They pointed out that it is not a crime to practice Falun Gong and that according to the Chinese Constitution, citizens have freedom of speech and can distribute materials to tell people the facts about Falun Gong.

Mr. Zhang had to defend himself.

Putting a hand on his left rib cage to ease the pain, he told the court: “It is not a crime for me to practice Falun Gong. Several policemen from the Yilan Police Department beat me. My left rib cage was severely injured and several teeth fell out. I also suffered many other injuries.

“I don't hate those people who beat me at all. But I must demand compensation for the injury. Also, they pressed my finger to get my fingerprint on their indictment documents while I was unconscious. All of their accusations and evidence are not true.” 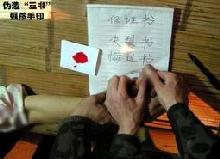 Judge Zhang Anke then stopped Mr. Zhang and didn't allow him to defend himself further. The judge said that any violation of law by police and their use of force to get “evidence” were irrelevant to the case.

Judges Zhang Anke and Lu Shoufang openly disregarded the law themselves by sentencing the five practitioners to prison. Mr. Mo was sentenced to 12 years in prison, Mr. Zhang and Mr. Sun to 5 years, and Mr. Xu and Mr. Li to 3 years. The court didn't inform Mr. Mo's attorneys of the verdict until 10 days after the trial.

Near Death in Detention

After his second arrest, Mr. Zhang Jinku was detained at the Yilan No. 1 Detention Center for 33 days, from July 17 to August 19, until he was near death.

He had already been weak prior to this arrest, due to the injuries sustained during the first arrest, and did not eat for 20 days during detention.

Afraid of having to the take responsibility for his death, the detention center then took him to the Yilan Chinese Medicine Hospital for emergency treatment. He has been in the emergency room for six days and is still in critical condition.

Police watch Mr. Zhang around the clock and have not allowed his family to see him. They have also threatened the family to not tell others about his situation.

We appeal to the international community to help rescue Mr. Zhang.

City- and county-level police departments in Harbin and Yilan
The provincial, city, and county courts, Procuratorate offices and bureaus of justice in Heilongjiang, Harbin, and Yilan

“My Experience of Distributing Anti-Firewall Software ”