(Minghui.org) Relationship issues between a wife and her mother-in-law have been a popular topic since ancient times in China.

Many daughters-in-law get upset and even leave their husbands. Some are afraid of facing this dilemma and choose not to get married at all. How to resolve this issue? After 20 years of living with her mother-in-law, Ms. Zhan Xiuqin found the answer. Ms. Zhan says she is extremely fortunate to be a Falun Dafa (also known as Falun Gong) practitioner. After she took up the practice, not only did her illnesses disappear, but also her troublesome relationship with her mother-in-law was fixed. 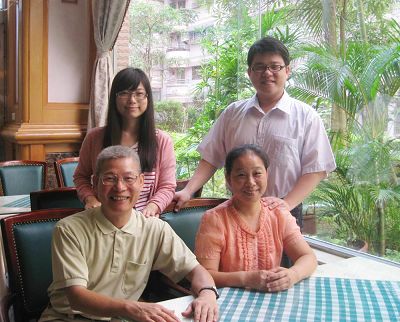 Before the practice, Ms. Zhan, 51, was a perfectionist. She lost her temper easily when things didn't go her way. She said, “I was explosive before I practiced Falun Gong!” She had always pursued perfection in whatever she did, including cleaning the house, at work, or teaching her children. She easily became irritated even when small things went wrong. Her children had always been afraid of her. When she raised her voice, her children would automatically go and stand against the wall lest she punish them. Her husband said, “That was her before she practiced Falun Gong.”

In the summer of 2008, Ms. Zhan's son recommended Falun Gong to her. At that time, she suffered from bone spurs in the fourth and fifth vertebrae of her spine. Her daily life was severely affected by the pain, and she had to walk slowly. It took her 10 to 20 minutes just to get out of bed. Later on, the pain spread to the rest of her body, leading to sciatica. She couldn't turn her neck at all and she was stiff like a robot. She was so fragile that she couldn't even carry half a bucket of water. Eventually she couldn't go to work anymore.

After Ms. Zhan started practicing Falun Gong, she successfully rid herself of all the pain without surgery or medicine. Ms. Zhan's son began the practice first. He thought it was very good and introduced it to his mother. When she first got a copy of Zhuan Falun, the main text of Falun Gong, she saw Master Li's photo smile at her. All of a sudden, she felt very relaxed. She then flipped the pages and saw that it was a thick book. She didn't think she could finish it and was about to give up. She told her son, “You know what? I have so much pain and need to see a doctor. I will read the book when I get better.” Encouraged by her son, she picked it up and started reading. The next day, she went to the practice site and joined the group practice.

Falun Gong has miraculous healing benefits, and it has helped cure many people with serious diseases. Ms. Zhan is just one of them. She felt extremely fortunate to become a Falun Gong practitioner.

Ms. Zhan used to have a severe nasal allergy. In the summertime, while others enjoyed the fans or air conditioners, she had to wear a mask to avoid stimulation from the moving air. In the winter, she used to spend a lot of money on expensive masks to protect her from the cold. During the first winter after she began the practice, she looked for her mask to wear before she went to bed. She couldn't find it and had to sleep through the night without it. Surprisingly, she slept well that night. She tried not to wear it the second day, the third day, and so on, until the end of winter. The nasal allergy that had bothered her for so many years was gone.

When summer came, to her surprise, she found the mask in a drawer that she used every day. She couldn't figure out why she didn't see it at the beginning of winter. Thinking back, she thought it was truly amazing--maybe it was so that she didn't have to depend on the mask.

Other health issues, including gynecological problems and low-blood pressure, were also healed. She experienced the lightness of being illness-free. Moreover, the tense relationship between her and her mother-in-law also disappeared when she strove to improve herself using the standard of Truth-Compassion-Forbearance.

Ms. Zhan said that the tension between her and her mother-in-law just grew over the course of many years. She believed this happened because, “We don't share a common ground in our fates.” No matter what she did in the past, her mother-in-law just wouldn't appreciate her. Because they came from different backgrounds, they saw things differently. Ms Zhan said, “My mother-in-law always used her notions to gauge things and judge me. That's when we had misunderstandings.” Because they didn't often communicate with each other, the tension between them became a vicious cycle. Although they lived under one roof, they rarely said a word to each other.

After Ms. Zhan took up the practice of Falun Gong, she gained a new perspective on things. Falun Gong requires practitioners to practice Truthfulness-Compassion-Forbearance and put others' interests first. Master Li, the founder of Falun Gong, taught her that one's relationship with others was predestined. She understood that perhaps her mother-in-law had been cold to her because she owed her from a past life. Her son had often teased her, “Maybe you treated Grandma badly in your past life.” Through cultivation, Ms. Zhan has improved her understanding. Now when faced with tribulations with her mother-in-law, her attitude has changed. She vowed that, regardless of her mother-in-law's attitude, she would conduct herself well and do the right thing. Her heart has softened through the practice, and she no longer feels mistreated and wronged.

Ms. Zhan's daughter, also a Falun Gong practitioner, said about her mother, “My mother's temper improved after she began the practice. She is no longer negative. In the past, she always worried about her children and was hard on them. Now she takes things lightly and trusts us more. At times, we still have conflicts, but then we quickly look inward to resolve them.”

In 2010, Ms. Zhan's mother-in-law couldn't take care of herself anymore due to her old age. She became incontinent and relied on her family to take care of her. Knowing that everyone in the family had work to do, Ms. Zhan's brother-in-law (her husband's older brother) suggested they put her in a nursing home. Ms. Zhan recalled a passage in Zhuan Falun:

“Of course, in practicing cultivation in ordinary human society, we should respect parents and educate our children. Under all circumstances, we must be good and kind to others, not to mention to our family members. We should treat everyone in the same way. We must be good to our parents and children and be considerate of others in all respects. Such a heart is thus unselfish, and it is a heart of kindness and benevolence.”

Although her salary was still needed to help support the family, thinking of Master's teaching, Ms. Zhan decided to resign from her job and stay home to take care of her mother-in-law.

In the beginning, her mother-in-law didn't appreciate her kind intent. She was often unfriendly to her and didn't want to cooperate. When Ms. Zhan put an adult diaper on her (because of her incontinence), she didn't want to wear it. Since Ms. Zhan was determined to take good care of her, she decided that, whatever the challenges, she would handle them well. One day, one of her children said, “Mom, look, Grannie is smiling at you!” Her mother-in-law's attitude had gradually changed. From coldness at first, she was developing a genuinely closer bond with her daughter-in-law.

Because she had benefited from practicing Falun Gong, Ms. Zhan hoped that her mother-in-law could learn to do the exercises, too. She played Master's Li video lectures to her every day (in her native Taiwanese dialect), and miracles started to happen. Her mother-in-law stopped taking medicine for her high blood pressure and diabetes. Moreover, the 88-year-old's hair started turning black and her skin became delicate and glowed. Her vision also improved and she looked younger.

When Ms. Zhan taught her mother-in-law to recite, “Falun Dafa is good,” seeing how she followed her word by word earnestly, tears rolled down her face. She knew her mother-in-law had accepted her into her heart. Her tears were tears of joy for Master Li and Falun Dafa have given her. Not tears of bitterness, but gratitude.