More of the Tortures Used by China's Communist Regime

(Minghui.org) The Chinese Communist regime has utilized hundreds of torture methods against Falun Gong practitioners over the course of the brutal 14-year persecution. The goal of the torture? To force practitioners to renounce their belief.

Words are inadequate to describe the brutality of the torture methods. Illustrations below show just a few of the tortures that Falun Gong practitioners are subjected to, in attempts to break their spirit. Although it is hard to believe that this is happening on such a wide scale today, such torture takes place inside prisons, forced labor camps, and detention centers, as well as brainwashing centers. 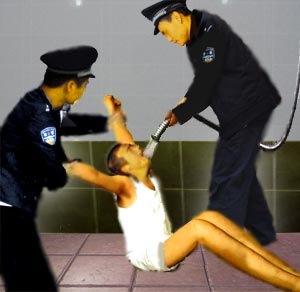 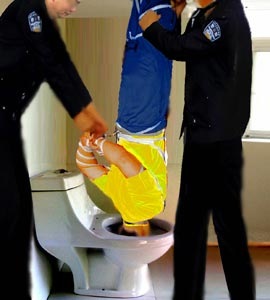 Guards in the Weifang Changle Forced Labor Camp in Shandong Province use hoses to force water into a practitioner's mouth and nose, or directly thrust the practitioner's head into a water tank.

Officers in the Changchun Police Department have used water kettles to dump water over practitioners, almost drowning them.

Some practitioners in the Guangzhou Brainwashing Center have been tied up and held upside down with their heads forced into a toilet.

Other practitioners have been force-fed with highly concentrated salt water, chili water, and even shampoo. Such torture causes severe damage to the nasal cavity, throat, chest, and digestive system.

2. Pressed Under the Board 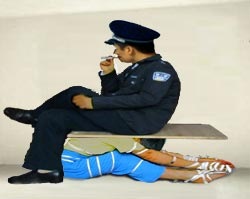 Torture illustration: Pressed under the board 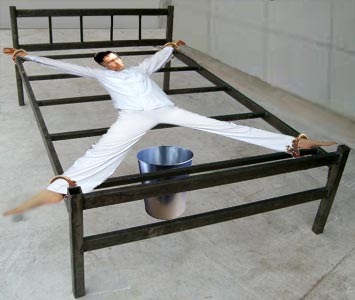 The “death bed” is one of the primary torture methods used against Falun Gong practitioners in the Beijing “Legal Education Training Center” (which is in fact the Beijing Brainwashing Center), as well as in Weibei Prison of Shandong Province, the Weifang Detention Center, and many other detention centers throughout China. 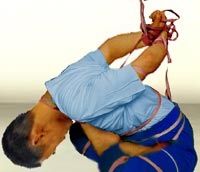 Torture illustration: Tied and hung up

Another savage torture method used in the Guangzhou Brainwashing Center involves the practitioners' legs being tied up in the full lotus position. Their arms are then tied behind their backs, and their hands are suspended behind them. This torture is excruciating.