The event was part of a Scotland-wide truth-clarification tour. Edinburgh was their third stop after Glasgow and Aberdeen. 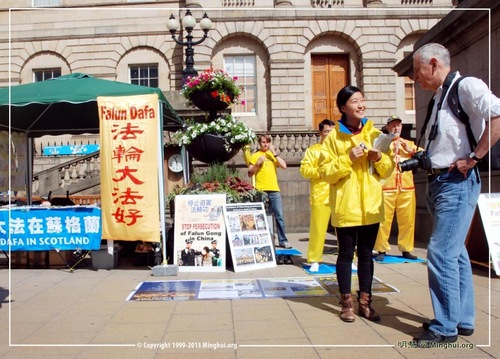 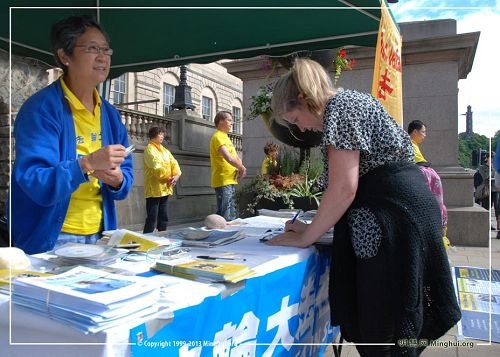 Many passersby stopped by the practitioners' informational booth to read the posters, banners, and display boards exposing the CCP's 14-year-long persecution of Falun Gong in China.

An Edinburgh councilman who had previously expressed his support of Falun Gong, stopped by and signed the petition. He asked the practitioners to keep him informed of similar, future events.

As a mother and daughter from Italy were looking at one of the display boards, a practitioner asked them if they had heard of the persecution of Falun Gong in China. The daughter said that her mother did not speak English. So after the practitioner explained about the Chinese regime's illegal practice of organ harvesting, the daughter translated everything to her mom. They both signed the petition.

Hundreds of people stopped by to watch the practitioners demonstrate the five Dafa exercises, with some people expressing an interest in learning Falun Gong.

After a man signed the petition, he shook hands with one of the practitioners, saying, “You are doing a great thing by letting people know about this evil persecution!”