(Minghui.org) Tianti Books in Toronto opened its second store on July 1, Canada Day. Located in the predominantly Chinese York Region of Toronto at the Pacific Mall—the largest Chinese indoor mall in North America—the store is dedicated to providing books and multimedia on Falun Gong (also known as Falun Dafa). Tianti, as the name implies: tian=sky or heaven, ti=ladder, aims to provide readers with a way of self-improvement. 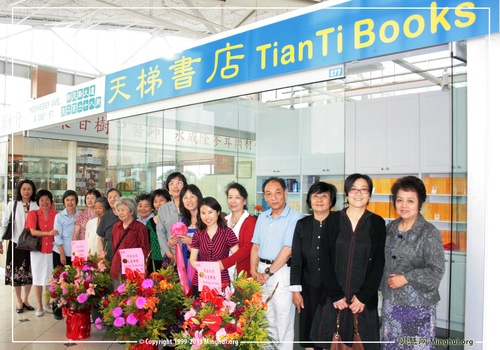 Opening of the second Tianti Bookstore in Toronto

The day after the store opened, a girl from Hong Kong came very early, before the store had even opened, hoping to buy a book. She told store employee Yandy, “I have been thinking of buying a Falun Gong book for a long time. When I came by here yesterday, I saw your opening ceremony but didn't have time to stop in. I'm glad it worked out today.”

A gentleman in his 50s was pleased to see the new bookstore. He greeted the employees in Cantonese: “Congratulations! I live nearby, and it is much easier to get to your store here than the one in Chinatown.” It turned out he had often visited the original Tianti bookstore to buy books.

According to the staff, the first Tianti Bookstore opened in 2008. Every day, there were newcomers who wanted to learn Falun Gong. In addition to selling books, the store also hosted many 9-day video lecture series of teachings by Master Li Hongzhi, the founder of Falun Gong. Sometimes, two lecture sessions were held concurrently, one in Chinese and one in English, to meet the demand.

After the Chinese communist regime banned Falun Gong in 1999, it exploited all of its resources to defame Falun Gong, both inside and outside of China. The public was consequently deceived. In time, however, the situation has improved.

One bookstore employee said, “Many people were eager to learn more after hearing about Falun Gong. They then started to practice.” She shared a story of a Chinese man who recently immigrated from China to Canada. He bought several books and later announced his resignation from the Chinese Communist Party and its affiliated organizations. In order to attend the 9-day lecture series, he moved to a rental place closer to the bookstore. Several days later, the building where he used to live caught fire. He was very fortunate to have left.

Ms. Li, a clerk at the bookstore, shared her own experience. She did not practice until after her retirement. The asthma that had bothered her for decades disappeared and never came back. She had more energy. By volunteering in the bookstore, she hoped to help more people learn Falun Gong.

Daniel, a 54-year-old Toronto resident, used to be an alcoholic. He couldn't control his temper, and his wife left him. In despair, he heard about Falun Gong and began to practice. He quit drinking and smoking, and his wife took him back. He said Falun Gong answered many questions he had about life.

Of course we can't promise that anyone and everyone who takes up Falun Gong will encounter experiences like these. Each person's experience is unique, as any practitioner can confirm. Practicing Falun Dafa is not an easy path - it is in fact quite challenging - often even difficult. Yet it is very rewarding nevertheless, to each in his or her own way. Why else would over 100 million people take up the practice?

If you'd like to give it a try for yourself, you'll find all that you need (in over 40 languages) at FalunDafa.org. All Falun Dafa activities are free of charge.