Canada: Multicultural Festival in Kitchener Gives People an Opportunity to Find Out about Falun Dafa (Photos)

(Minghui.org) “This brief but wonderful experience makes me feel that I can maintain my tranquility no matter where I am.”

This was how Shimmel, an engineer at Waterloo City Hall, felt after trying some of the Falun Gong exercises at the 46th Annual Kitchener-Waterloo Multicultural Festival in Victoria Park, Kitchener, Canada. With his eyes slightly closed, the hustle and bustle surrounding him seemed worlds away and he truly enjoyed the tranquility.

The festival usually takes place on the third weekend in June and features a variety of international food, music, and dance. It draws huge crowds from different ethnic backgrounds. Falun Gong practitioners in the Kitchener-Waterloo area have participated in the event for many years.

It was pouring at the opening ceremony at noon on June 23, but the rain stopped shortly afterwards, and the weather was cool and pleasant for the rest of Saturday and Sunday.

Several posters with information on Falun Gong were lined up the lawn next to the Falun Gong booth. Some of the practitioners demonstrated the exercises while others chatted with interested people and asked if they'd like to sign the petition condemning the Chinese Communist Party's large-scale forced organ harvesting from living practitioners.

Many passersby stopped to learn to fold lotus flower origami, take Falun Gong flyers, or chat with practitioners. Many expressed an interest in learning more about Dafa after reading the posters and talking with practitioners. They asked how they could get started and were elated when told that all Dafa books and audio/videotapes are free to download from the websites.

Both adults and children alike were interested in learning the Falun Gong exercises. 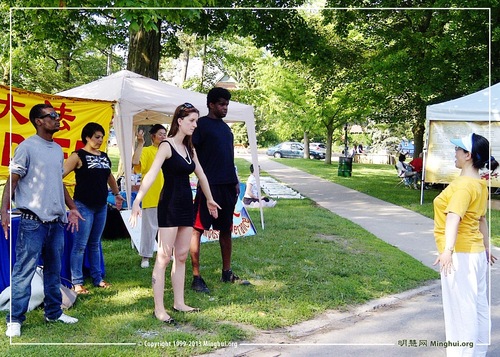 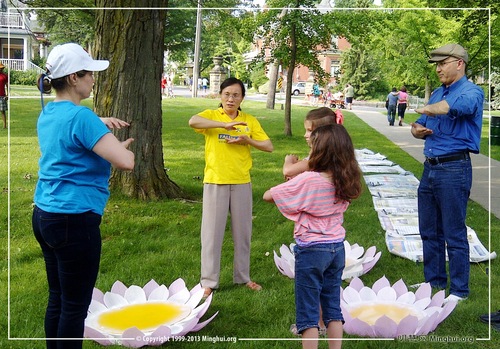 An entire family learn the exercises together

Shimmel and Chanerika: A Couple with Roots in India

Shimmel, an engineer, has been practicing yoga for many years. Both he and his wife Chanerika have ancestors that hail from India, a Buddhist country. When they learned that Falun Gong is a high level Buddha School practice based on Truthfulness-Compassion-Forbearance, they immediately felt it was exactly what they needed.

After trying the meditation for a little while, Shimmel shared his thoughts: “The Falun Gong principles of Truthfulness-Compassion-Forbearance bring serenity and peace to this chaotic world so it is truly precious. We need a clear mind and a standard to tell right from wrong in order to make wise decisions.”

Chanerika considered the principles of Truthfulness-Compassion-Forbearance fundamental: “There are way too many conflicts and too much violence today. We are in desperate need of tender care and tolerance. Thank you for sharing Dafa with our community. It is so precious and truly brings peace to mankind. I hope everyone can come and learn Falun Gong. I hope Dafa spreads to more and more places.”

As Shimmel saw it, suppressing people's belief in Truthfulness-Compassion-Forbearance is the same as destroying the foundation that sustains a society's development and is absolutely unacceptable. He signed the petition to support Falun Gong practitioners' efforts to end the brutal persecution.

The Taiwan Friends Association had the adjoining booth. After quietly observing, the director came over to say hello. She complained that her people were very loud but felt it was such a treat to see the practitioners doing the exercises that she might want to pick up meditation some time soon. She brought up the subject of Shen Yun and said she saw Shen Yun flyers everywhere, both in Taiwan and Canada. Before she went back to her booth, she expressed her deep admiration for practitioners' efforts to restore and promote traditional Chinese culture.

Mr. Geng and his wife, both immigrants from China, studied the posters for a long time and carefully read all the information. However, they were a bit hesitant when practitioners offered them more materials to read, including DVDs on Falun Gong, copies of the Nine Commentaries on Communist Party, and flyers about resigning from the CCP.

They eventually took some brochures but wondered where practitioners got the money to make them.

Mrs. Geng, a Christian, had trouble understanding why practitioners encouraged people to quit the CCP. The practitioner reminded her of the 80 million people killed by the CCP during its numerous political movements and told her that the Party is now committing the most sinister crime by persecuting Dafa. She said, "Heaven is showing mercy by giving people a chance to break away from the doomed Party."

The practitioner's explanation eased Mrs. Geng's concerns, and, although she herself had never joined any CCP-related organizations, she urged her husband to quit.

Using “Geng Tianyou” as an alias, the practitioner helped Mr. Geng quit the Youth League and the Young Pioneers. She advised the couple to recite “Truthfulness-Compassion-Forbearance is good and Falun Dafa is good” and assured them heaven would bring them good fortune. The couple thanked her and carefully inquired about Dafa websites and local group exercise sites.

A Young Couple Who Had Never Heard about Dafa

Even as the practitioners were packing up towards the end of the festival in the evening, small groups of people still kept dropping by. A young couple who had never heard about Falun Gong before signed the petition without any hesitation after learning what is happening in China. The young man even removed his hat to sign.