(Minghui.org) Today's news from China includes incidents of persecution that took place in 12 cities or counties in 8 provinces. According to this report, 12 practitioners were subjected to mistreatment during detention, and at least 11 practitioners were illegally arrested. 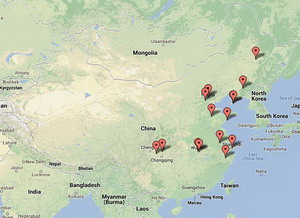 Ms. Yan Qiuying was arrested while distributing DVDs about Falun Gong on the afternoon of June 7, 2013. She was taken to the Yinhang Police Station and then transferred to a detention center nearby.

Mr. Yang Linxing, from Baishi Town, was arrested and searched with force by Wu Yunchuan, Communist Party secretary of Baishi Town, and other agents on May 28, 2013, because he carried Falun Gong materials. The agents also ransacked his home. Mr. Yang was taken to the Guangan Detention Center.

Mr. Chen Lin was recently sentenced to two years in prison. He is being detained in the Congzhou Prison in Chengdu.

Ms. Guo Lihua is a teacher at the 42th High School in Dalian. She was arrested at the school by officers from the Kuiying Police Station in Zhongshan District on May 20, 2013. She is being held in the Yaojia Detention Center.

Ms. Guo was previously arrested by officers from the Kuiying Police Station on April 23, 2013. Her home was ransacked. She was released in the afternoon of the same day.

Ms. Xiao Jing from Xiushui County, Jiangxi Province, was arrested in Yiwu by the local police on March 16, 2013. Her mother recently went to the Yiwu Domestic Security Division and learned that Ms. Xiao was being held in the Yiwu Detention Center. The detention center staff would not allow her mother to visit her.

Ms. Li Huizhen, 70, and Ms. Yu Shuhua, 64, were arrested by officers from the Yongzheng Police Station while distributing informational materials about Falun Gong in a market in Jinzhou District on the morning of June 9, 2013.

Ms. Li resisted the arrest and was taken to the police car by force. The police took her photo. Three officers searched her home that afternoon; they confiscated Falun Gong books and materials.

Ms. Yu was released the same day. Ms. Li is being held in the Dalian Detention Center.

On the morning of June 4, 2013, Mr. Yuan's family received a call from the Qingdao Bus Company, requesting Mr. Yuan's wife, Liu Xiuzhi, to sign a document so they could fire Mr. Yuan. His wife refused to comply.

In the early morning of May 31, 2013, five or six plainclothes policemen broke into Ms. Liu Jie's home when her older sister opened the door to go to work. The police arrested Ms. Li and sent her to the Benxi Detention Center.

Ms. Sun Zerong was arrested by officers from the Liji Police Station on May 5, 2013. She was held at a detention center in Erzhigou for 15 days.

In late May 2013, Ms. Tian Qingling, Ms. Xu Ying, Ms. Lin Peiyu and Ms. Wang Dongli were transferred from Division No. 1 to Division No. 2 of the Qianjin Forced Labor Camp, where persecution intensified.

On May 25, 2013, Zhou Muqi, chief of Division No. 2, didn't allow the practitioners to brush their teeth or wash up. They were also not allowed to eat or drink.

Ms. Tian was locked in a small cell. The other three practitioners were also isolated. Their hands were handcuffed behind their backs They were tied to steel chairs for three days and three nights and were not allowed to sleep.

Ms. Tian and Ms. Zeng refused to do slave labor. In retaliation, guard Huo Shuping did not allow them to sleep and forced them to sit on small stools for a prolonged period (a form of torture).

Mr. Fan Jianqiang was transferred to the Dajiangou Brainwashing Center from the Zhangzhuang Detention Center on June 10, 2013.

“From Running Away on Seeing Falun Gong Practitioners, to Being Proud to Be One”