(Minghui.org) At a World Health Organization (WHO) meeting in 2012, experts warned that the overuse of antibiotics has resulted in a rapid increase of drug-resistant bacteria, and that now even common surgery or minor infections can cause death.

Addressing a meeting of infectious disease experts in Copenhagen on March 14, 2012, Margaret Chan, director general of WHO, suggested that every antibiotic is at risk of becoming useless. She states, “A post-antibiotic era means, in effect, an end to modern medicine as we know it.” She then continued, “For patients infected with some drug-resistant pathogens, mortality has been shown to increase by around 50%.” Ms. Chan also emphasized the dire consequences that drug-resistant bacteria could reap upon in-hospital treatments, “Some sophisticated interventions, like hip replacements, organ transplants, cancer chemotherapy, and care of preterm infants, would become far more difficult or even too dangerous to undertake.” (World Health Organization)

The path of endless illness 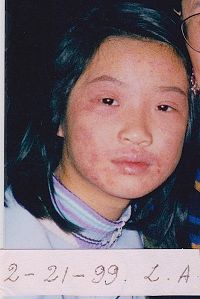 Lin Yili with dermatitis in February 1999 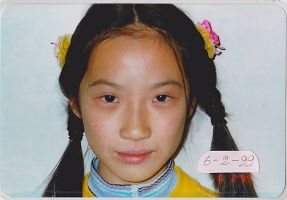 Lin Yili's skin looking so much healthier in June 1999 after suffering from dermatitis for four years.

My daughter Lin Yili was six-years-old when we first discovered that she had dermatitis. The symptoms became worse as she grew older. The inflammation appeared on both sides of her body, and was oozing pus and blood. Her undergarments were often stained with streaks of blood. What worried me the most was that she could hardly eat any staple foods such as oatmeal, bread and tofu. Her condition worsened as soon as she would eat them.

The doctors injected her with anti-allergy drugs, but the dermatitis only became worse. She also took traditional Chinese medicine, but her symptoms remained the same. All the doctor could say was that my daughter is going to have to live with this illness for the rest of her life.

I spent a lot of money on expensive medication for my daughter for many years. Her complexion was sallow, she had no strength in her arms and legs, and she was often trembling.

My daughter asked me one day, “Why am I so miserable? I'd rather die.” She didn't know that her illness was like a knife cutting into my heart every day. We held each other tightly and cried. I encouraged her to have faith, and told her that even if I had to spend every single penny I had, I would find her a good doctor to cure her illness. At the time I had asked others to help us find a good doctor in Beijing. My daughter also suffered from severe pneumonia twice. The tip of her tongue became black, and this was considered a dangerous sign according to Chinese medicine. One night she told me that she saw many villains in her room. I knew then that she had seen low level beings in other dimensions.

Like my daughter, I had a lot of illnesses. However, at the end of 1998, a friend introduced me to Falun Gong. My daughter, who was not even ten, commented that the exercise movements looked beautiful. When I asked her if she wanted to learn, she resoundingly said, “Yes!” This was the miraculous turning point in her life.

Without spending much money, I bought the book Zhuan Falun and some other Dafa books. I stopped watching my favorite programs on TV, and every day my daughter and I would do the exercises and study the Fa together. We would also read cultivation articles from other practitioners. I recorded “Falun Dafa Cultivation Stories – Vol I” in Cantonese and played the tape during meal times for my family to listen. In this way they learned that Dafa practitioners are good people who conduct themselves according to the principles of Truthfulness-Compassion-Forbearance.

After months of practicing I understood that the key to cultivation is to study the Fa and cultivate our hearts!

One night, when I came home late, my husband was playing Mahjong. My daughter was in tears because she was going on a school field trip the next day and her dad did not want to go out and buy her lunch for the trip. So I told her that I would buy it for her.

As we were leaving the house, my daughter changed her attitude and cheerfully said goodbye to her dad. I asked her, “You were mad at your dad earlier. So why are you happy now?” She replied, “I remember that Teacher told us to be nice to people. Even if others are not nice to us, we should be kind to them.”

I was happy to hear that, as my daughter was improving her xinxing and benefiting from the practice.

When my daughter was standing in line to buy lunch at school one day, a classmate came over and asked if she could borrow a dollar. My daughter only had $1.25 on her. But she did not hesitate and gave the dollar to her classmate. After her classmate left, she looked at the 25 cents and thought, “What can I buy with 25 cents? I guess I'll buy a piece of candy.”

Later, other classmates found out about what had happened with my daughter, and they decided to share their food with her. The student that borrowed the money was very touched and gave my daughter a hug. She asked, “Why did you lend me the money when you didn't even have enough yourself?” My daughter replied, “I didn't think about myself. I thought you probably needed the money more than I did.” After I heard the story I laughed and hugged my daughter. From being “self-centered” to “putting others first” is the path of a life returning to one's true self.

A practitioner's body is continuously purified after we begin cultivating in Dafa. Very soon, my daughter was able to eat different types of food that dermatitis patients are told to avoid. Her ulcerated skin is also a thing of the past.

My daughter is now a young lady, and she is grateful for Teacher's salvation. She once said to me, “If we didn't practice Falun Gong, we probably wouldn't be alive today!”

As for myself, the pains in my joints, migraines, night sweats, arrhythmia and uterine tumors have all disappeared. I no longer take any medication either. I told my doctor that I became healthy because I practice Falun Gong. She was very happy for me and replied, “Then you should continue to practice Falun Gong.”

“Thanks to Falun Dafa, a 69-Year-Old Woman Can Walk Again”

“Immersed in the Warmth of Falun Dafa ”