(Minghui.org) June 15, 2013 marked the first day of the week-long 15 th Munster Street Festival in Dortmund, Germany, often referred to as the International Arts and Culture Week .

Located in the western part of Germany, the city of Dortmund is home to a melting pot of 180 ethnic groups. Thus, the theme of the event was aptly named, "We are united"

During the opening ceremony, the Master of Ceremonies invited several ethnic groups to come on stage and proudly display their folk cultures. Some of the groups included a Russian choir, a Czech girls dance group, the Republic of Korea's Arirang dance troupe, an Indonesia traditional dance team, a Portugal dance group, as well as the Chinese meditation practice, Falun Gong. 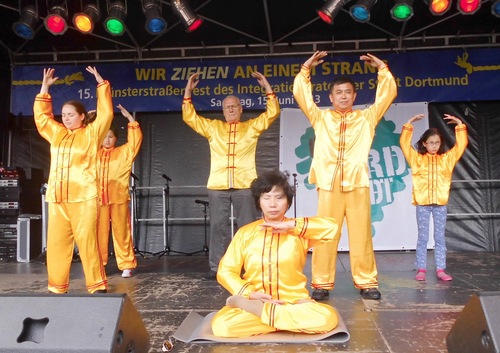 Practitioners demonstrate the exercises on stage

As the practitioners began to demonstrate the exercises, the MC told the audience in German, “This is the Falun Gong group. It is a practice that is based on the principles of Truthfulness, Compassion, and Forbearance. It involves a set of five exercises that are suitable for people of all ages. Practicing Falun Gong increases one's vital energy, while at the same time calming down one's mind.”

“Falun Gong originated in China,” the MC explained. “And now it has spread to over 100 countries worldwide. Unfortunately, it is not allowed to be practiced in China and is still being persecuted there.”

People were watching and listening very attentively. Some people in the audience followed along with the practitioners' hand movements.

"The Falun Gong movements are really relaxed and look very comfortable,” one woman noted. “I think it's absurd to persecute Falun Gong people just because they want to practice the exercises! They are not bad people; they're not against the government or anyone else. They just want to be good people. It's a shame that such a practice is prohibited in China!"

Sata Lena, a practitioner from Romania, said that she has greatly benefited by practicing Falun Gong, even though she has only been practicing for two years.

"By adhering to the principles of Truthfulness-Compassion-Forbearance in my daily life, I've been able to find inner peace. I also feel healthier and no longer suffer from chronic neck problems.

“When I first read the main book of Falun Gong, Zhuan Falun, I wasn't even aware that the practice was being persecuted in China. As I began reading, I realized that the book is teaching humankind how to assimilate to Truthfulness-Compassion-Forbearance, the nature of the universe."

Sata Lena said that when Romania was still under the control of the Communist Party, her father, a painter, went to local hotels and restaurants to sell his paintings. He would often meet and talk with tourists from Germany and the United States. As a result, the police started to persecute him and later confiscated all of her family's valuable possessions.

She knew from this experience that communism was an evil cult. "I cried when I found out that Falun Gong is being persecuted in China,” she explained. “When Romania was controlled by the Communist Party, school children were required to sing songs praising the Party; wear a red tie, and extol the virtues of the Party.”

“Now that Romania is no longer under communist rule, people feel free and relaxed. They are allowed to express their points of view without being required to pledge their lives to any political party."

When Sata Lena talks to Chinese people, she always recommends that they read the book, Nine Commentaries on the Communist Party. She tells them: "This is a great book for Chinese people. It shows how China's 5,000 years of traditional Chinese culture was virtually wiped out during the Cultural Revolution. Over 8,000 temples were pillaged and destroyed.

“People in the past lived their lives according to the principle of Truthfulness-Compassion-Forbearance. Yet today, the Chinese regime imprisons anyone who dares to publicly practice these principles.

“Some people say that they have no choice but to obey the Party's orders, even if the orders conflict with their own conscience and sense of morality. However, I believe that good people will always do the right thing!"

The practitioners also set up an informational booth, introduced Falun Gong to passersby, and encouraged people to sign a petition calling for an end to the persecution in China.

One German man said, "I feel very sad about this persecution. It is terrible that human dignity is being trampled on like this."

After a woman put her signature on a petition, her young daughter started asking one question after another. The mother patiently explained what each of the practitioners' display boards was about: "This is a picture of an engineer who had been tortured to the verge of death and then had his heart removed from his body, while he was still alive.

“This person had been killed for his organs. This one had been severely persecuted to the point that he only weighs 55 pounds now. And this woman had been persecuted to death in the Masanjia Forced Labor Camp."

One Peruvian woman said: “I've been wanting to learn how to do the sitting meditation for a long time now. Can you teach me how to do it?”

More and more people have expressed a desire to learn Falun Gong and support an end to the persecution in China.

“If Everyone Pays Attention to Minghui, There Will Be No Opportunity for People to Disrupt the Fa”