(Minghui.org) On June 1, 2013, Falun Dafa practitioners held an event in front of the State Hall, in the historic city of Graz, Austria, to inform people about the 14-year persecution of Falun Gong in China. They set up an information table, distributed Dafa-related materials, and used a megaphone to tell people about the crimes committed by the Chinese Communist Party (CCP) against Falun Gong. They also asked passersby to sign a petition condemning the Chinese regime's actions. At the end of the day, the practitioners had collected over 200 signatures. 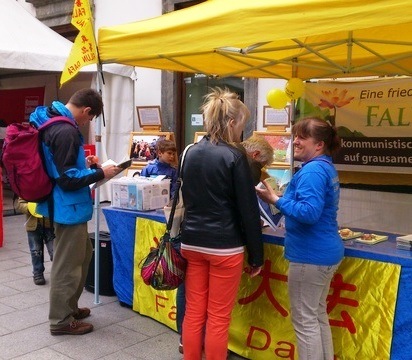 Practitioners in Graz, Austria clarify the truth to passersby

A couple walked over to the practitioners' table, and with minimal explanation from the practitioners, they both signed the petition. "I heard about Falun Gong while I was living in Toronto,” the husband said. Apparently he did not know that there were Falun Gong practitioners in his home city of Graz. Upon hearing more about the practice, his wife said that she wanted to practice Falun Gong.

A woman walked over and signed her name to the petition form. Turning to her son, she said, "Do you want to do something good today? Is so, sign your name here." The young boy signed his name and they both left.

A yoga teacher was stunned when she heard that the CCP harvests organs from living Falun Gong practitioners. She asked for a stack of brochures and fliers so that she could hand them out to her circle of friends. She wished the practitioners good luck and thanked them for introducing Falun Gong to her.

“A Family Under Persecution”