(Minghui.org) Today's news from China includes incidents of persecution that took place in 12 cities or counties in 9 provinces. According to this report, 8 practitioners were subjected to mistreatment during their detention and at least 12 practitioners were illegally arrested. 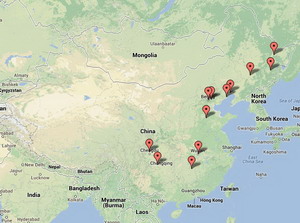 Mr. Feng Pu (from Langfang City in Hebei Province) and his fiancee Ms. Li Yue (from Beijing) are both college students in New York. When they flew from the US to Beijing in late May, Beijing State Security officers arrested them upon their arrival.

Mr. Feng was transferred to the Langfang Brainwashing Center on May 29. Ms. Li is still detained in Beijing, but the exact location is unknown.

Yu Chunliang, an officer at the 8thDivision of Jiamusi Prison, often beat practitioners. After beating Mr. Guo Qizhong this March, he beat and swore at Mr. Meng Xianguo on June 3.

Guards found hand-transcribed Falun Gong books from Mr. Meng Xianguo on May 31. Yu beat him hard, causing Mr. Meng's ears to constantly hum. Now he is unable to hear anything.

Ms. Xu Xiuyun was arrested as she clarified the facts about Falun Gong on the morning of June 9, 2013.

Ms. Cao Xiaohua was arrested on June 3, 2013 and is currently at Changchun No.2 Detention Center.

When an elderly female practitioner told others about Falun Gong at Taziba in Tianpeng Town on June 8, 2013, Tianpeng Town police arrested her. Her current whereabouts are unknown.

Mr. Xu Wenlong, a 25-year-old practitioner from Mudanjiang City, is a student at China Central Academy of Fine Arts. He was sentenced to six and a half years in prison, and was detained in Ward 16 of the Tailai Prison. Office Zheng Hui ordered inmates to beat him in late May 2013. To cover up the injuries, Division head Liu Chunxiao handcuffed him, chained his feet, and put a winter hat on him. Mr. Xu has been detained in solitary confinement since then.

Mr. Xue Mingshui was arrested on June 1, 2013 and is currently at the Sanhe City Detention Center.

Ms. Li Xiaoyan, 50 years old, was sent to labor camps three times in the past. Police arrested her and another practitioner on October 23, 2011. She was sent to the Masanjia Forced Labor Camp on November 4, 2011, with a term of 21 months. Her family was not allowed to visit her. Someone who knew the situation said Ms. Li had the symptoms of high blood pressure. In addition, guards at the camp have been force-feeding her with unknown drugs.

When Mr. Liu Heqing was destroying a poster board that defamed Falun Gong in Yuhu District on the morning of May 30, 2013, four police agents arrested him and took him to the Yuntang Police Station. Officials then sent him for a physical examination at Xiangtan City Police Hospital and have kept him at the Jintangwan Detention Center since then.

“Don't Be the “Wise Man” with Heavy Human Attachments”