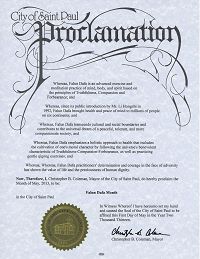 Whereas, Falun Dafa is an advanced exercise and meditation practice of mind, body, and spirit based on the principles of Truthfulness, Compassion and Forbearance; and

Whereas, since its public introduction by Mr. Li Hongzhi in 1992, Falun Dafa brought health and peace of mind to millions of people on six continents; and

Whereas, Falun Dafa emphasizes a holistic approach to health that includes the cultivation of one’s moral character by following the universe’s benevolent characteristic of Truthfulness-Compassion-Forbearance, as well as practicing gentle qigong exercises; and

Whereas, Falun Dafa practitioners’ determination and courage in the face of adversity has shown the value of life and the preciousness of human dignity.

Now, Therefore, I, Christopher B. Coleman, Mayor of the City of Saint Paul, do hereby proclaim the Month of May, 2013, to be:

In the City of Saint Paul.

In Witness Whereof I have hereunto set my hand and caused the Seal of the City of Saint Paul to be affixed this First Day of May in the Year Two Thousand Thirteen.

“Cherish and Preserve the Cultivation Environment; Rationally Validate the Fa With a Clear Mind”

“Practicing Falun Gong Made Me Healthy”