(Minghui.org) On May 12, 2013, practitioners in Poland gathered in the Capitol City of Warsaw to celebrate the 21 st anniversary of Falun Dafa's introduction to the public and the birthday of Master Li Hongzhi, the founder of Falun Gong.

Practitioners did the sitting meditation in front of the Chinese Embassy and held a banner with the words “May 13, World Falun Dafa Day." They expressed concern for the embassy staff who are still unable to break free from the Chinese Communist Party's (CCP) control.

Gathering in front of the Chinese Embassy in Warsaw 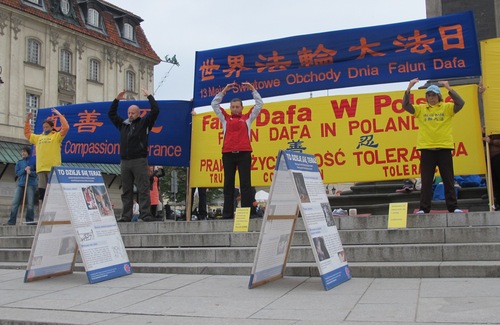 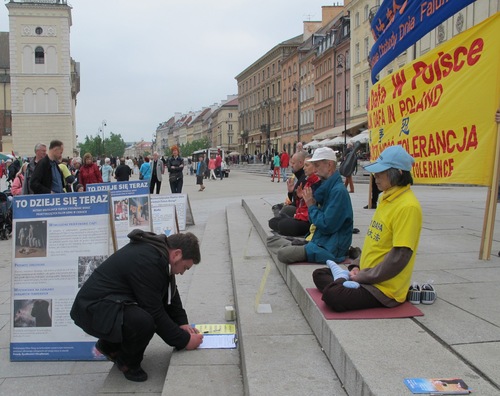 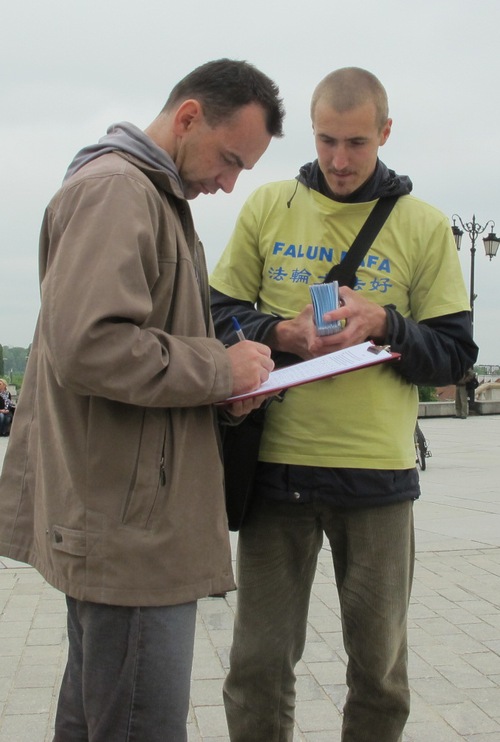 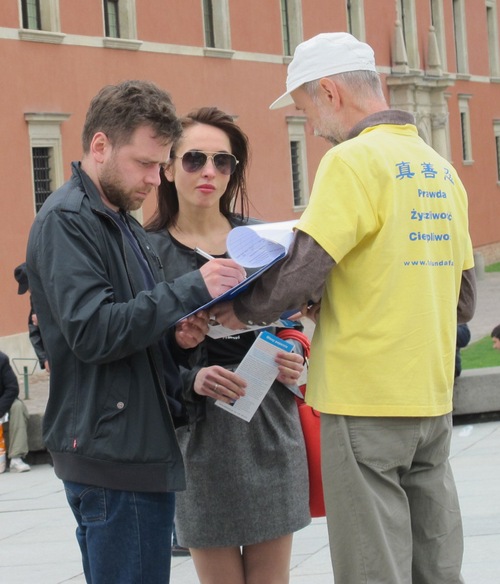 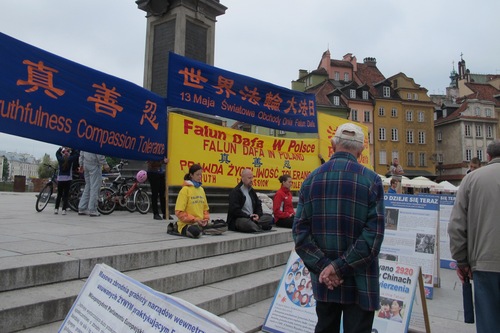 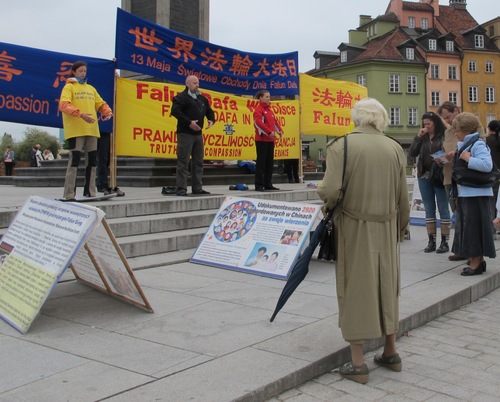 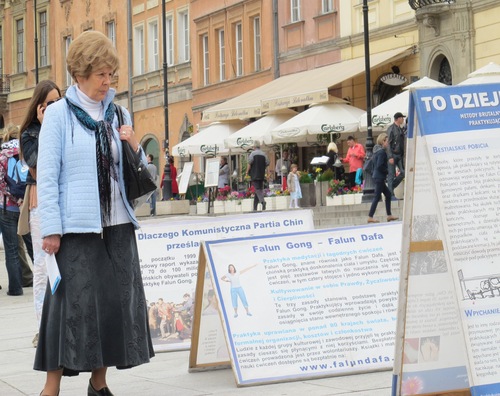 In Old Town Square, practitioners held banners and set up truth clarification display boards. Many passersby were moved by the peaceful nature of Falun Gong and the melodic exercise music. People from all walks of life stopped to watch the exercise demonstrations and read the display boards.

Some people wanted to know more about Falun Dafa Day and the actual practice itself. Many people signed a petition opposing the persecution of Falun Gong in China. Several schoolchildren learned the Falun Gong exercises by following along with the practitioners. 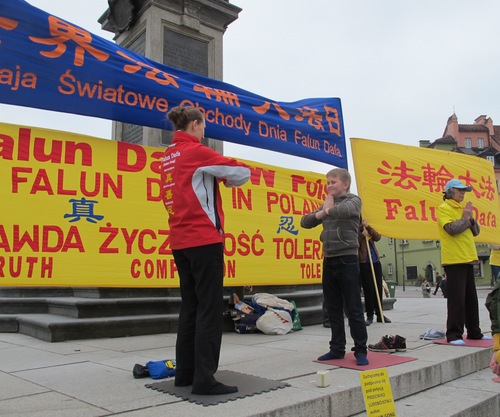 Groups of Chinese passed by the Dafa booth with some taking photos, some filming the exercise demonstrations, and others stopping to read the display boards. Quite a few Chinese took the initiative to walk over and ask about Falun Gong.

When these Chinese tourists were given a booklet outlining the CCP's practice of organ harvesting from live Falun Gong practitioners, many showed both sympathy and anger, realizing it was absolutely true.

Poland practitioners were delighted to see these people's willingness to learn the facts, knowing that their futures would be bright. When one practitioner asked a group of Chinese if they wanted to quit the Party and its affiliated organizations, they all nodded, yes. They seemed very open to talking about Falun Gong, without being bogged down by the issue of politics. When the last Chinese tourist was about to leave, he called out, "I like Falun Gong!"

One practitioner handed a flier to a man standing next to him in a parking lot. Within 30 minutes, the man found the practitioner and said: "I have carefully read the flier you gave me and want to ask: 'Why is such a terrible thing allowed to happen in China? Why hasn't any state government intervened?' These evil communist butchers should be killed! The Chinese regime must be brought to trial. I cannot tolerate this sort of thing, I really cannot!”

The practitioner calmly explained: “We do not need to kill anybody. There is an old saying in China: 'He who is unjust is doomed to destruction and if mankind does not do something about it, Heaven will. It does not worry us that the Communist Party continues to act the way it does, as its actions have already decided its future. This is Heaven's mandate. The most important thing that you can do is read the book, Zhuan Falun, which teaches humans the principles of Heaven and Earth. You can either read it online or download it for free. I hope you can read it.” The man replied, "Thank you very much. I will read it!" 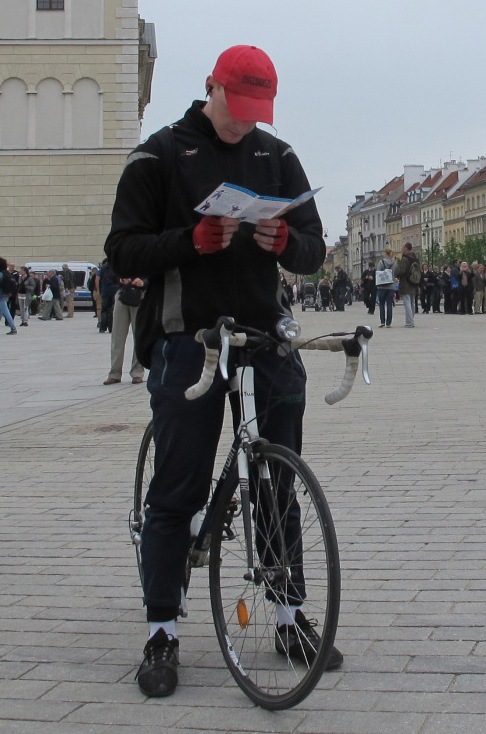 Practitioners gather for a group photo

The practitioners recalled the course of their cultivation and felt that only by Master's infinite mercy would they be able to return to their original homes. They recognize that their job is to assimilate to Truthfulness-Compassion-Forbearance and that it is really Master who has given practitioners their glory, a glory that can never be repaid. They declared, as a group, they will fulfill their mission as Dafa disciples and will always remember World Falun Dafa Day in light of the Buddha’s great kindness.

“Witnessing a Miracle: Chandelier Glows at Group Fa-Study while Building Has No Electricity”

“Looking Outward Versus Looking Within”