(Minghui.org) The New York Falun Dafa Experience Sharing Conference was held on Sunday, May 19, 2013, at the IZOD Center. More than 8,000 Falun Dafa practitioners from 53 countries around the world attended the event. Master Li Hongzhi came to teach the Fa during the morning session. All disciples stood up and welcomed Master with warm, enthusiastic applause.

This was the largest international experience-sharing conference since the communist regime started persecuting Falun Gong in China in 1999. The New York conference in May 2012 was attended by over 7,000 Dafa practitioners, while the one in 2011 had over 5,000 attendees from over 40 countries. 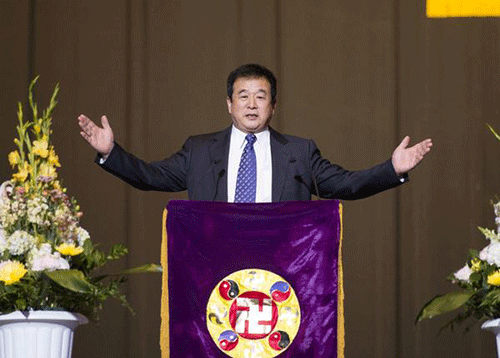 Master Li arrived after the first practitioner had shared his cultivation experience. Revered Master compassionately taught the Fa to practitioners for nearly two hours. At the end of the Fa teaching, all disciples once again stood up and applauded enthusiastically, with deep gratitude. 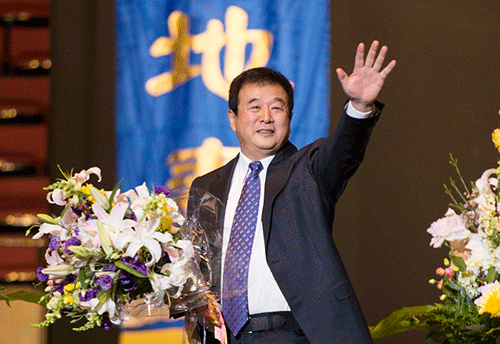 Master Li Hongzhi taught the Fa for nearly two hours.
This photo was taken right before Master left the stage

The conference took place at the IZOD Center, located in the greater New York area. The center, which houses a large sports arena, sits in northern New Jersey, across the Hudson River from the island of Manhattan. 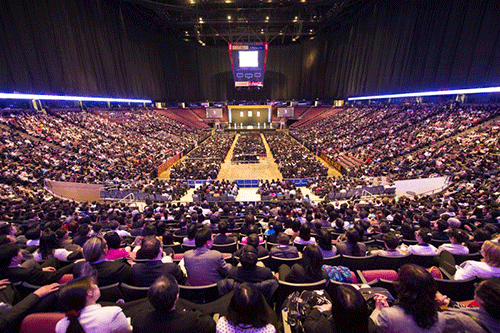 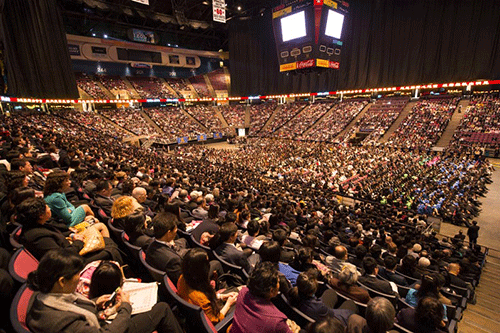 The crowd in Izod Center, the venue of the conference

The atmosphere in the conference hall was solemn and serene. Flowers were beautifully arranged on the stage. On top hung a huge, bright banner reading, “2013 New York Falun Dafa Experience Sharing Conference” in both English and Chinese.

Two vertical banners, bearing verses from Master's poem, “The Fa Rectifies the Cosmos” from Hong Yin II, were also hung on each side of the stage:

“Compassion can harmonize Heaven and Earth, ushering in spring
Righteous thoughts can save the people in this world”

With five electronic screens, practitioners sitting in any corner of the conference hall could all see the stage. Other electronic screens around the venue displayed verses of Master's various poems from Hong Yin, urging disciples to be diligent in cultivation.

During the experience-sharing session, several Western and Chinese practitioners from the U.S. and around the world shared how they cherish the opportunity to cultivate, study the Fa and improve themselves on the path of cultivation. They also spoke about how they persevere in saving sentient beings despite difficulties and hardships.

Artists from Shen Yun Performing Arts shared their cultivation experience in the video titled “Our Path,” shown during the conference.

Within just a few years, Shen Yun Performing Arts has grown from experiencing the hardships of getting established to becoming the world's premier performing arts company, creating countless miracles in the process.

With steadfast righteous thoughts and belief, Shen Yun performers have put tremendous efforts into improving their skills, which enabled them to make incredible progress very quickly. With their solid cultivation, sincere and seamless cooperation as a group, and selfless devotion, they have created a miracle unfathomable in the performing arts world.

In their taped interviews, Shen Yun artists reaffirmed that their success could not have been possible without taking cultivation and the desire to assist Master in rectifying the Fa and saving sentient beings as the foundation. They have worked non-stop each year, touring the world and saving numerous sentient beings.

In their sharing, each of the artists expressed deep gratitude and appreciation to revered Master.

Mr. He from Rhode Island, Ms. Sun from New York, and Ms. Zhang from Canada each shared their experience of promoting Shen Yun in their respective locale.

While coordinating the promotion of Shen Yun in Rhode Island, Mr. He paid special attention to studying the Fa, through which he constantly received hints from Master on how to improve. At the same time, he made efforts to facilitate the cooperation between practitioners. He was able to harmonize and balance the tasks of Shen Yun promotion, personal work and collecting signatures for a White House petition calling for the end of forced organ harvesting from living Falun Gong practitioners in China. As a result, each aspect complemented the others and played a positive role.

Ms. Zhang also shared her experience of coordinating Shen Yun promotion. She talked about how she looked within after falling down and injuring herself, how she let go of her resentment and cultivated compassion, and how she made efforts to strengthen the cooperation of practitioners as a whole.

Ms. Sun talked about how she improved in her cultivation through putting up Shen Yun posters. When she visited business owners to persuade them to let her put up posters, she constantly purified her thoughts and got rid of human notions. In the process, she overcame her laziness, broke through layers upon layers of obstacles set up by the evil, and tried her utmost to do everything well.

Ms. Fu from Argentina talked about how Dafa practitioners have persistently clarified the facts about Falun Gong in Chinatown and in front of the Chinese Consulate in Argentina, dissolving the evil and saving Chinese people there.

Under the pressure from the Chinese communist regime, an Argentine court had reversed the original ruling and canceled the order of arrest for Jiang Zemin, the head of the Chinese Communist Party (CCP) who spearheaded the persecution in 1999. With Dafa practitioners' unwavering efforts, the supreme court recently revoked the lower court's action, re-opening the case against Jiang Zemin.

Caroline from Australia shared how local practitioners recently made a breakthrough in clarifying the facts to the government and mainstream media about the Chinese regime's atrocious crime of harvesting organs from living Falun Gong practitioners. Practitioners put saving sentient beings as the top priority, making continuous efforts to clarify the facts to the media, government officials at different levels, and society at large.

As a result of these efforts, a legislation has now been proposed in Australian Parliament to make it a criminal offense to go oversees for a transplant with unethically obtained or trafficked organs. In addition, the media has extensively reported on Huang Jiefu, a transplant surgeon and former Minister of Health of the CCP involved in harvesting organs from living Falun Gong practitioners, bringing the issue into national focus and beyond.

Persevering in Clarifying the Truth and Saving People

Mr. Huang from Taiwan is a physician who began practicing Falun Gong in 2002. In line with his expertise and position, he has extensively clarified the facts to the medical community about forced organ harvesting from living Falun Gong practitioners in China. In the process, he constantly looked within, let go of the ego, and improved in cooperating with other practitioners to save more sentient beings.

Fourteen-year-old Ms. Sun came abroad from China a short while ago. She soon joined the young disciples overseas in making phone calls to China to persuade people there to quit the CCP and its affiliated organizations. Studying the Fa regularly and having a heartfelt wish to save sentient beings has enabled this shy girl to speak naturally and confidently on the phone. Within six months, she has helped dozens of Chinese people to quit the CCP organizations.

Rising in Cultivation while Doing Sales for the Media

Deborah is a Stanford University graduate who began practicing Falun Gong in 2010. She operated an art business before moving to New York in 2012 to become a photographer for the English Epoch Times. Subsequently, she joined the sales team.

Working at the Epoch Times has enabled Deborah to make rapid progress in cultivation and change her deeply rooted human notions. Through this experience, she has become ever more clear on the importance of saving sentient beings while solidly cultivating oneself. This April, she and her teammates broke the newspaper's sales records.

The Fa conference lasted from 9:30 a.m. till 6 p.m. As they left the conference venue and said their goodbyes, Dafa practitioners set off to make new breakthroughs on their paths of cultivation. Master's Fa teaching and fellow practitioners' sharing has led them to ponder how to become more diligent in cultivation, study the Fa solidly, let go of all human attachments, unconditionally cooperate with each other, and save more sentient beings.