Germany: Spreading Dafa and Exposing the Persecution in Offenburg

(Minghui.org) Practitioners in Germany held a Falun Gong Information Day on April 6, 2013 in Offenburg, a small town in the southwest of Germany. Despite abnormally severe and cold weather conditions, practitioners took part wholeheartedly in the event, hoping to let people in the area know the truth about Falun Gong and how it has spread around the world. 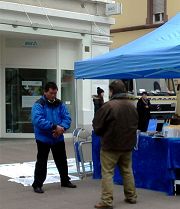 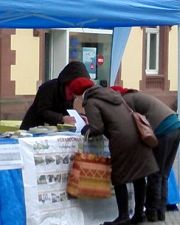 Many people expressed outrage at the Chinese Communist regime's bloody persecution and organ harvesting from living Falun Gong practitioners. Many signed to support the efforts to put an end to the persecution.

The truth clarification booth was set up in front of a mall, surrounded by the weekend markets. Despite the cold, many people were still willing to be outside. While passing the Falun Gong information booth, some people accepted informational flyers. Having learned the truth about the live organ harvesting, they offered their support by signing the petition. Some even asked how to learn the Falun Gong exercises.

An older local German man stopped in front of the booth to watch the exercise demonstration. He said that he had practiced qigong a long time prior, when qigong was popular in Offenburg. There were a variety of qigong schools at the time, from Vietnam, Thailand, India, China, etc. But it was not long before they subsided in Offenburg. He believed that the main reason for people's lack of enthusiasm in qigong was the qigong schools' methods of teaching. Many people ultimately quit practicing qigong because it showed no outstanding power to heal illness. For example, some qigong practitioners had claimed to have been healed after starting a qigong practice, but the disease returned soon after. It is true that the nation of Germany welcomed qigong with open arms at that time, but the enthusiasm has since waned.

One practitioner told the gentleman that Falun Gong was totally different from other qigong practices, Falun Gong being a high level cultivation practice guided by the characteristics of the universe, Truthfulness-Compassion-Forbearance. “Cultivation” means to continuously strive to improve one’s moral character, becoming closer to these universal principles. “Practice” refers to a set of five easy-to-learn, gentle standing exercises, and a meditation exercise. Cultivating oneself is essential, and practicing the exercises supplements the process. As long as we truly practice Falun Gong, improving our character, eliminating our attachments, and returning to our true selves, we can truly remove the root cause of illness and become healthy and fit. This is the main difference from other qigong. The man listened attentively to the practitioner. He took a flyer and said that he planned to read all the Falun Dafa books after returning home. He repeatedly thanked the practitioners for their help before leaving.

Another older German man hardly believed the story of Falun Gong practitioners who had suffered in China. He was greatly surprised and confused by the Chinese Communist regime's persecution of such a peaceful belief and exercise practice. He wanted to find an answer. In reply, the practitioners explained how the Chinese Communist regime killed the innocent in order to destroy human faith. Having learned the truth, the man carefully read the petition form before signing.

Another man later stopped at the information desk and began chatting with the practitioners. He spoke of his extraordinary experiences in practicing Falun Gong. He had been reading Falun Gong books and watching Falun Gong lectures for ten years. This was the day that he decided to become a Falun Dafa practitioner. He had come to the truth clarification desk to ask practitioners to teach him the five sets of Falun Gong exercises. After spending some time learning the exercises, he said goodbye to the practitioners, hoping to participate in the local group Fa-study and practice site.

One particular German couple was very keen about Falun Dafa. They chatted with the practitioners for a long time and asked many questions.