(Minghui.org) Mr. Shi Heyan never expected that he would ever experience firsthand the principle of “good will be rewarded with good.”

When his wife's elder brother-in-law was diagnosed with lung cancer, Mr. Shi started searching for treatments for him. He looked everywhere for famous Western and Chinese doctors and medicine, but he didn't find anything that worked. Early in the summer of 1998, Mr. Shi went back to his hometown of Changhua. One of his old friends recommended Zhuan Falun to him after he heard about Mr. Shi's brother-in-law. His friend talked about the wonderful effects of Falun Gong on healing and fitness. He said, “As long as he believes in Falun Gong, he will gain more than good health. Falun Gong can help him solve any problem.” Mr. Shi wondered, “This friend of mine is not at all full of empty talk. Why did he talk so big this time?” He chose to believe his friend as an opportunity to save his brother-in-law.

He went to the bookstore as soon as he returned to Taipei. He purchased the whole set of Falun Gong books and DVDs of Fa lectures and the exercise instructional DVD. He thought, “I must read the books first. I will recommend it to my brother-in-law if it's really good.” The more he read Zhuan Falun, the more he was touched. “Wow, isn't this what I have been searching for over the past several decades?” He believed he had found a treasure. He later delivered the book to his brother-in-law. It was a pity that his brother-in-law didn't accept it and passed away several months later. However, Mr. Shi was determined to follow the principles of Truthfulness-Compassion-Forbearance. He couldn't have imagined the great changes that took place later in his life. 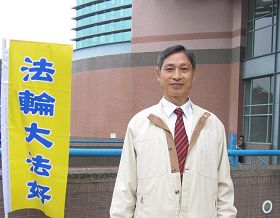 Mr. Shi Heyan, who had suffered from many diseases, became stronger after practicing Falun Dafa.

From the moment he was born, Mr. Shi caused his parents great concern. His congenital asthma seized him from time to time. Every time it happened, the whole family rushed to save him. It happened every day. Even doctors could do nothing about it. As a child, he had problems with his digestive system and also caught colds easily. Later he developed allergic rhinitis and paranasal sinus.

After he retired from military service, Mr. Shi went to famous hospitals in Taipei for medical treatment. Doctors gave him anti-allergy injections periodically. Within just one year, his dose increased from 1000:1to 1:1, but it still didn't help. Finally, the doctors were afraid of possible serious side effects, so they stopped giving him injections. He had to submit to heaven's will.

For about two decades, he had relied on a nasal vessel dilator to breathe. He said, “I couldn't breathe through my nose, just through my mouth. My throat was dry and hurt within only ten minutes. Each spray of the nasal dilator helped me keep breathing for about three hours. When I caught a cold, each spray helped me breathe for only half an hour. Every night I had to get up once every three hours for one spray of the nasal dilator. Moreover, I had to see a doctor once every couple of days.”

He had wondered: "I have such a good job and family, so I should have had a very happy life. But why is breathing, which is so natural for an average person, so difficult for me? Why do I feel so bad both physically and spiritually? I didn't do bad things in this life, so why do I suffer so much? What's life? What's the meaning of life?" What he couldn't have expected was that, while sincerely searching for medical help for his brother-in-law, he himself obtained Falun Dafa, the most precious treasure in his life. Falun Dafa solved all his questions about life. When anyone asked him, “What on earth did you find in Zhuan Falun?” he would suggest that the person read the book him or herself. He said, “It's difficult to explain clearly about the truth and meaning of life. You can sense Zhuan Falun's intricate and profound connotations only after reading the book yourself.”

Mr. Shi had given up his quest to get over his congenital asthma, allergic rhinitis, and paranasal sinus. However, after practicing Falun Dafa, all those conditions disappeared. He did not hurt anymore and could breathe with ease! He had never expected that he could benefit so much from Falun Dafa. 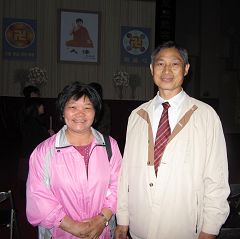 Mr. Shi Heyan's wife, Suzhu, admired people who had masters when she was a child, so she had joined in a school of practice. When she witnessed the miracles that happened to her husband, she gave up her earlier practice and also started practicing Falun Dafa.


People nowadays always sigh, “It’s easy to love each other, but it’s difficult to get along well with each other.” Mr. Shi and his wife lived with his parents after they got married. Suzhu later resigned and stayed at home to take care of her parents-in-law and children. Her mother-in-law was very strict and had a bad temper. One time, because one daughter didn’t follow her instructions, the mother-in-law used a burning match to threaten her. In the end, she did burn her face. Every winter and summer vacation, Mr. Shi’s brother brought his two kids to the house, so Suzhu had to take care of them, too. During the holidays, when Mr. Shi’s sisters and brothers came to visit the family, Suzhu was busy preparing food for more than 20 people. During the three years after her father-in-law suffered a stroke and became totally incontinent, Suzhu had to clean up after him. She got upset from time to time: “I am not the only daughter-in-law. Why is it always me who has to do everything? I am not even the eldest-daughter-in-law. I am so busy, and then other relatives bring their kids to me.” So much grievance and so many complaints frustrated her.

Suzhu had been afraid of the heat since she was a child. She couldn't live without an electric fan or an air conditioner in the summer. Her husband, however, couldn't endure cold air. It was tough for Suzhu. Sometimes she wished that Heyan was not at home.

In the summer of 1998, just one week after Heyan started practicing Falun Gong, Suzhu turned on the electric fan. Suddenly she was aware that Heyan didn't even notice it! Two days later, Suzhu turned on the air conditioner and saw that Heyan was still all right. Curious, she asked him, “What school are you practicing? I think it is quite good. You are all right when the air conditioner or electric fan is on.” Heyan said, “Yes, my nose feels fine!”

From then on, Suzhu started practicing Falun Gong. She followed the principles of Truthfulness-Compassion-Forbearance and always considered others. She looked inside to find her own faults in conflicts. As a result, she let go of her attachments and improved herself constantly. She became happier day by day and didn't feel tired anymore, no matter how much she did for her family. Her mother-in-law was very touched and became easygoing. Suzhu took care of her mother-in-law, who had breast cancer, for six years until her mother-in-law passed away. Suzhu said, “Master taught us to endure it when it’s difficult to endure, always consider others, and be kind to others, not to mention to our family members. I really couldn't have made it if I didn't practice Falun Dafa.”