(Minghui.org) I met a young man in the fall of 2006, who had served in the military in Dandong City, Liaoning Province. He spoke to me about an incident that happened several years prior. What happened still gives him chills.

“It was a very cold day in December 2000. Our unit was called on a sudden, urgent mission at around 1:00 a.m. We donned our full gear and went to the Dandong Train Station and surrounded it. After a short while, a train from Tianjin arrived. A few military officials and army physicians got off the train. After they conversed with our officers in private, some soldiers from our unit, including some from our company, were pulled out to escort the train. Two soldiers were assigned to each box car.

“We didn't know what was in the train cars prior to boarding, but we sensed the intensity of the situation, and it was very unusual. Once we got in the car, we were shocked by what we saw. It was a train for transporting domestic animals, and the cars were open at the top. However, it was not carrying animals, but Falun Gong practitioners. There were men and women, young and old. We were told that they had been arrested because they went to Beijing to appeal for Falun Gong. Their wrists were handcuffed and attached to a metal bar at the top of the car. My companion and I were frozen with fear. We were afraid to say a word and just stood there holding onto our submachine guns. It was a winter night in northeast China, and you imagine how cold it was riding in an open-topped fast-moving train. I don't remember how long we traveled, but we finally arrived at the destination, the Sujiatun District of Shenyang City, Liaoning Province (where the atrocities of organ harvesting were first exposed). 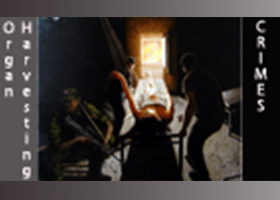 “After we returned to our military base, we learned there had been a major accident during the mission. While transporting the Falun Gong practitioners, a soldier in our company from Shuangcheng, Heilongjiang Province, could no longer control his emotions after seeing them being hung up like that. The majority of the practitioners were women and many of them elderly. Some were wearing very thin clothes. It was said that this soldier started to hallucinate, and he thought every practitioner on the train was his mother. The soldier talked to his companion who had the handcuff keys, hoping to open the handcuffs and let the practitioners warm themselves up a little. His companion rejected his suggestion. Out of anger, this soldier fired into the sky, and his companion got scared and unlocked all the practitioners. His companion later reported him to the senior officials.

“As a result, this soldier from Shuangcheng was immediately locked up in solitary confinement, and was beaten and interrogated for many days. He was repeatedly asked, 'Why did you open the Falun Gong practitioners' handcuffs? Did you have a political agenda?' The soldier was resolute and did not say a word. Because he was near death from the beatings, an official from the same base contacted the soldier's uncle, who was head of an armed forces unit. His uncle paid a lot of bribe money and eventually took him home.”

Since this incident happened several years ago, there might be discrepancies regarding the exact dates and time, but what is described truly happened.