(Minghui.org) The publication of the Nine Commentaries on the Communist Party in late 2004 inspired a rising tide of Chinese people around the world to begin to quit the Chinese Communist Party (CCP) and its affiliates (the Young Pioneers and the Youth League).

The number of people who have published their resignations on the Epoch Times website stood at over 135 million, as of March 25, 2013.

Editor's Note:  The 14-year-long persecution of Falun Gong has been covered up in China, and the country is blanketed in false propaganda demonizing the peaceful spiritual practice. Practitioners encourage Chinese people to quit the CCP as a way of supporting Falun Gong, believing that doing so will help bring these people a brighter future when the truth is ultimately revealed and those responsible for the persecution are brought to justice. 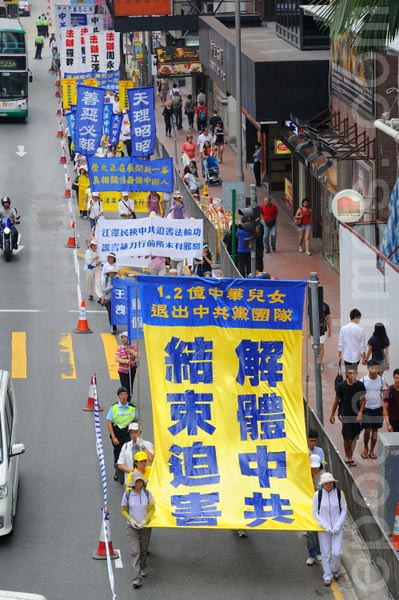 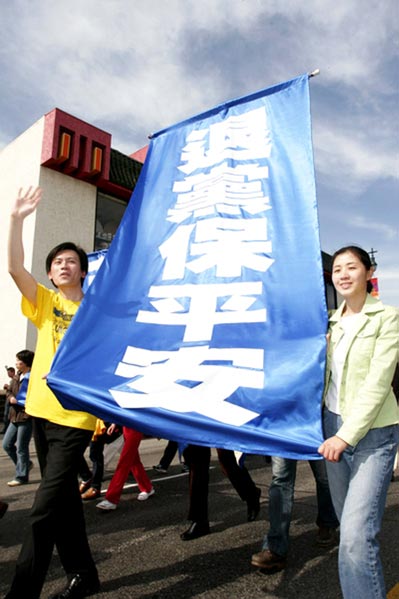 CCP Official Withdraws from the Regime During the “Two Congresses”

During the CCP's “Two Congresses” this month, the "Quit the CCP Hotline" in Toronto, Canada rang several times. When Ms. Wang picked up the phone, the person on the other end hung up.

It was an overseas call from Beijing. Ms. Wang called back, and a middle-aged man answered. Ms. Wang said, “This is the Global Quit the CCP Hotline. People are doing the three withdrawals [withdrawing from the Party and the two affiliated youth organizations] for their own safety. Are you a Party member?” The man quickly said, “We are having the 'Two Congresses' here. That topic is too sensitive!”

Ms. Wang understood and said, “It's very simple. You don't need to say anything sensitive. Let me do the talking.” The man at the other end listened quietly.

“You work within the CCP system, so you know first-hand about the corruption and evilness of the CCP. How can such an evil party survive? Please follow the mandate of Heaven and quit!”

Sensing that the man at the other end was a bit hesitant, Ms. Wang said, “Don't worry. Gods can see people's hearts. I'll give you an alias, 'Xiang Shan,' to help you quit.” The man said repeatedly, “OK, thank you! Thank you!”

Ms. Wang was quite touched by what happened, “Resulting from years of tireless efforts by Falun Gong practitioners clarifying the facts, people have awakened. CCP officials are now calling on their own to quit the CCP. The evil Party is being pulled out by its roots!”

Colonel Li Long (alias) and pilot Wang Fei (alias) in China's Air Force called the Quit the CCP Hotline and said to Ms. Wang, “Things are in a mess in mainland China. The Communist regime is completely rotten and beyond cure! If things are not handled properly, there could be war. We don't want to risk our lives for the Party any longer. We don't see any hope for China's ruling regime...”

They left their real names and phone numbers with the volunteer staff on the hotline and said, “Falun Gong are the most reliable and trustworthy people!”

As military personnel and others awaken and see through the deceit of the CCP, they are no longer willing to serve the regime.

Choosing a Path of Hope

Ms. Zhang got through to a telephone in a university dormitory in China one evening. Eight students listened to her and asked many questions about things like the staged self-immolation in Tiananmen Square.

Ms. Zhang said to them, “Before I went overseas, I used to live in Beijing, about a 40-minute bus ride from Tiananmen Square. We often went there, and I never saw any police officers walking around carrying fire extinguishers or fire blankets. But in the CCTV's 'self-immolation' program, you can see that the police arrived within a minute with fire extinguishers to put out the fire on Liu Chunling, and used fire blankets... Doesn't this indicate it was a hoax?

“The CCP's persecution of Falun Gong is totally based on lies. It's shocking that the government of such a huge country would cook up such big lies to deceive the world in order to persecute kindhearted Falun Gong practitioners.” The students quit one by one after learning the truth. Some also said that they wanted to practice Falun Gong.

One person who had been released from a forced labor camp earlier withdrew right away without any hesitation. She told Ms. Zhang that she had witnessed the evilness of the CCP in the forced labor camp, and she also witnessed the kindness and perseverance of Dafa practitioners, who clarified the facts to them while they themselves were suffering at the hands of the CCP.

This person said she still had the precious truth-clarification booklet that Dafa practitioners had given her when she was inside. She told Ms. Zhang that although she was living a hard life at the time, she was no longer living in ignorance, because she had learned the truth and had regained hope. She said her life had become meaningful and she was telling everyone she came across that Falun Dafa is good.

After learning the facts about Falun Gong and withdrawing from the CCP, a man who works in a coal mine asked Ms. Zhang to mail him a truth-clarification VCD so he could help more people learn the truth.

In areas where authorities have violently retaliated against residents who rallied together to protect their rights, the local people have often felt hopeless and helpless. Upon receiving phone calls from the global quitting the CCP centers, they realized that the CCP was the root cause of their suffering. They began to see hope after realizing that the CCP's disintegration is imminent, and withdrawing.

On some occasions, certain people wanted to be the first to do the three withdrawals, then told many others about it.

Recently, “Quitting the CCP” volunteers have seen some heartening changes.

In the early days, right after the Nine Commentaries was published, many people could not distinguish between the “Party” and “China,” and were antagonistic when the crimes committed by the CCP were brought to light.

Many people refused to listen to the facts, thinking that it had nothing to do with them, and they were quite happy as long as they themselves were not being persecuted. Some felt that they could do nothing to help the situation when they heard about the brutal persecution of Falun Gong. Others did not believe that “good will be rewarded with good and evil will receive retribution,” and said, “Should the sky collapse, everyone will die together.”

When things reach the extreme they usually turn around and go the other way. People in China are now eating contaminated food, drinking contaminated water, and breathing heavily polluted air. They have realized that they have been deceived by the CCP for decades, and are now finally awakening to reality.

People no longer believe the CCP when it says, “You will live a good life as long as you have money.” Disgusted by the regime's lies, many people are now searching for meaning in their lives and for truth. Many people who have listened to truth-clarification phone calls from Falun Gong practitioners are reluctant to hang up and have asked for more detailed information about Falun Gong, and copies of the Nine Commentaries on the Communist Party.

Due to persistent efforts by Falun Gong practitioners, who clarify the facts and exposing the CCP lies, more and more people have begun searching for meaning in life. They feel this is something of eternal existence, unlike material benefits, which quickly vanish like mist and clouds.

People are eagerly wanting to know more about Falun Gong, because they have realized that the principles and facts about the persecution are closely relevant to their lives. They increasingly seek to withdraw from the Party, and proactively tell others what they have learned. By doing so they have chosen a bright future for themselves.