(Minghui.org) Organ transplantation experts in France, as in many other parts of the world, agree that forced organ harvesting does indeed exist in Mainland China. The number of transplants that takes place far outnumbers the organs available from the officially claimed source: prisoners who are executed. And in a country where cultural taboos make organ donation after death a rarity, and with organs in short supply elsewhere around the world, China seems to have a virtually unlimited supply of organs. Sources even claim that the “donors” are young and healthy.

All of these point to organ harvesting from living Falun Gong practitioners filling the organ supply. “I think the truth is being demonstrated in the most striking way,” Professor Yves Chapuis, one of the pioneers of organ transplantation in France, commented at a recent forum in the French Parliament.

Professor Francis Navarro from France’s Montpellier University Hospital recalled his experience in China, which made him certain that at least a dozen people were killed for organ transplants within two days. He warned that French doctors may be party to organ harvesting in China unknowingly by training Chinese doctors.

MP Boyer and MP Xavier Breton called for continued efforts to prohibit trafficking in human organs and to pass a related bill in the French Parliament.

Representatives of Doctors Against Forced Organ Harvesting (DAFOH), French organ transplantation experts, and the France Falun Dafa Association attended the forum on November 27 at the invitation of Valerie Boyer, member of the National Assembly of France. Former Minister and MP Françoise Hostalier hosted the forum.

Professor Belghiti believed that the organ trade has become a major source of revenue for many hospitals. He said that it is strange that international organ transplant doctors often encounter a shortage of organs, but that is not the case in China. That country seemingly has unlimited sources of organs, and these organ donors are young and healthy.

According to reports by Amnesty International, the number of prisoners executed in China in 2006 was 1,101, and very few people are willing to donate their organs due to cultural factors. Professor Baylor's research data raises a question: what is the source of so many transplanted organs?

A representative from Doctors Against Forced Organ Harvesting (DAFOH) said that China is the only country in the world where the waiting time for an organ is two weeks. This figure is not at all consistent with international norms, and does not match the number of the executions in China each year.

According to a number of investigative reports by David Matas and David Kilgour, and an investigation by U.S. reporter Ethan Gutman, the surplus organs are from tens of thousands of Falun Gong practitioners who have been imprisoned for their beliefs since 1999.

Michel Wu, former head of the Service in Chinese of Radio France International, said that 80 million innocent Chinese people were killed in the various political movements during the Chinese regime's 60 years of rule. As this regime still continues, senior Chinese Communist Party officials can use any means to get rich. When organs from executed prisoners are no longer sufficient to meet the demand of the flourishing market, they target Falun Gong practitioners, because their belief (Truthfulness-Compassion-Forbearance) is exactly opposite of the Party's ideology.

President of the French Falun Dafa Association Mr. Alain Tong said that Chinese media have recently revealed that two Chinese military officers were promoted for having actively participated in organ harvesting from Falun Gong practitioners. Additional proof, according to Tong, is that the murders not only remain unpunished, but have been encouraged, and that Falun Gong practitioners are indeed their main target.

A large amount of evidence show that tens of thousands of Falun Gong practitioners illegally detained in forced labor camps and other facilities are used to service a burgeoning organ transplant industry, said David Matas. 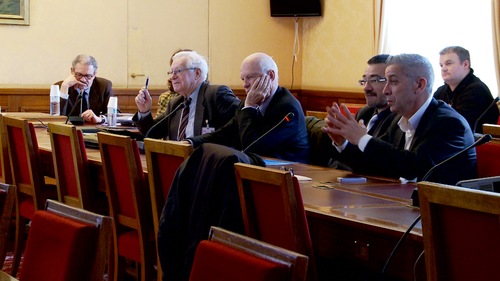 MP Valerie Boyer has been concerned over the organ trade involved in China's organ transplantation for years. She emphasized that trafficking in human organs must be stopped. She hoped that the French Parliament can adopt a related bill.

MP Xavier Breton said that he will work together with MP Boyer to relate to the French Parliament and international community of respecting ethical values in organ transplants. He hoped that everyone will continue their efforts to stop the organ trafficking and illicit organ transplants. 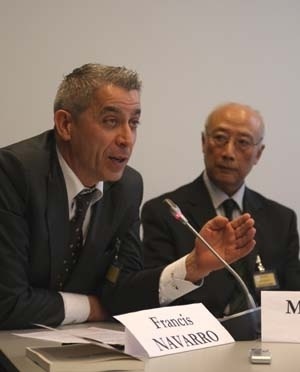 Professor Francis Navarro, from France’s Montpellier University Hospital, talks about his experience of training Chinese surgeons in China at the seminar

Professor Francis Navarro from France’s Montpellier University Hospital went to Chengdu City in China in 2007 to train Chinese surgeons in organ transplantation techniques. There were 200 cases of organ transplants to be done at the time.

He recalled, “I asked a staff member of our partner institution in China a few days before I went there for information about transplant donors and recipients. He did not give a direct answer, and only explained that they were only ordinary organ transplants. He also told me that everything was ready, as soon as I arrived there, and there would be organ transplants available the next day. I felt something was being avoided.

“Now in retrospect, this personal experience makes me certain that they harvested organs from executed prisoners. I understand the day before we arrived, and the day when organ transplants were to be performed, there was a batch of executions. According to data that was later obtained, at least a dozen people were executed at that time.” He added.

Professor Navarro said that organ transplantation techniques and surgery in France have a certain reputation in the international arena. China specifically requested French organ transplant doctors to go there to train Chinese doctors.

Some French doctors may well have been involved in or are participating in the development of China's organ transplants. He hopes that as experts, French surgeons can be aware that organs cannot be trafficked, and taking organs without a person's consent is even more unacceptable.

Professor Yves Chapuis, one of the pioneers of transplantation in France, said that for quite some time the community of transplant specialists—as well as the general population—has been skeptical about the allegations.

“Now, I think the truth is demonstrated in the most striking way,” Professor Chapuis said. “This only makes our worries bigger."

Professor Belghiti said that he will continue calling upon the international community to work against the organ trade, and ask them to refuse to go for organ transplants in countries where organ trade exists, to reduce or eliminate illegal organ harvesting.