(Minghui.org) Signature petitions of Falun Gong practitioners in Poland have collected tremendous support in calling for the United Nations to take action to end the forced organ harvesting in China. About 16,000 signatures have been collected. Many people have helped, such as taking the blank petition form home to collect signatures from their family and friends, and then bringing it back.

Chinese visitors have also learned the facts of the persecution and organ harvesting while in Poland, during the practitioners' two and a half months of efforts.

The signature petitions in Warsaw, Łódź, Katowice, Krakow and other cities are a part of the global petition campaign initiated by Doctors Against Forced Organ Harvesting (DAFOH). 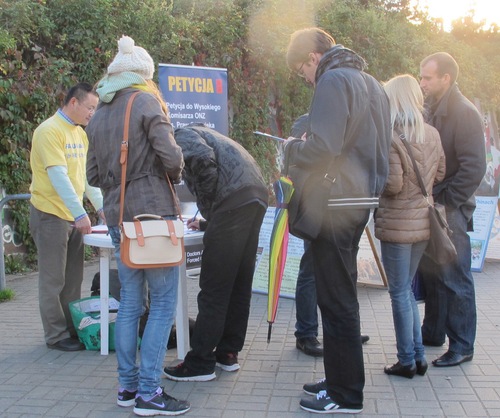 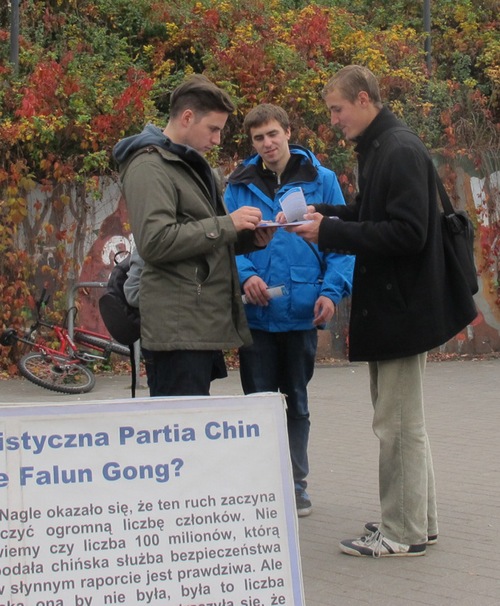 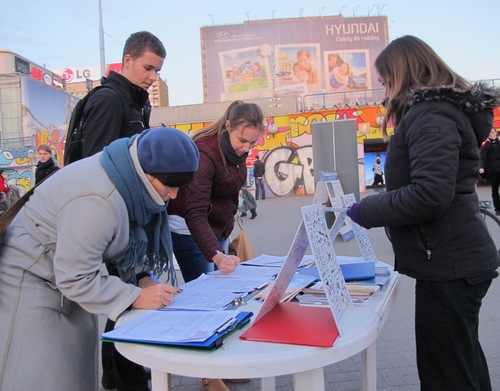 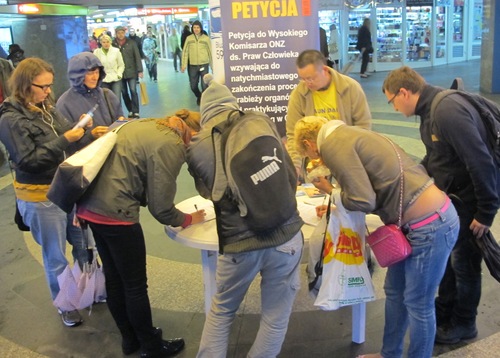 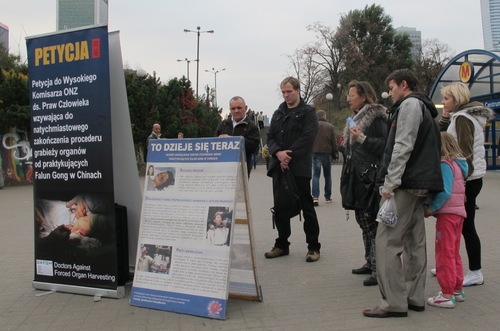 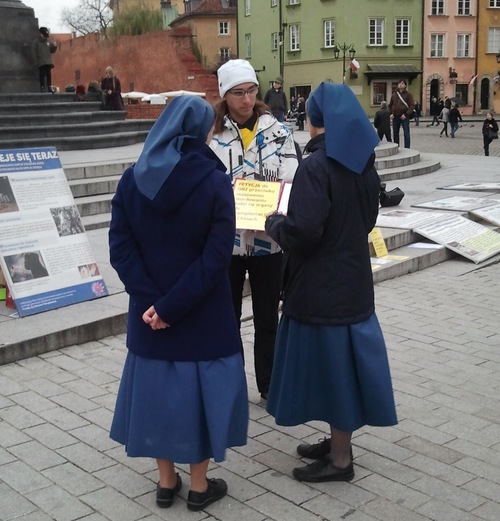 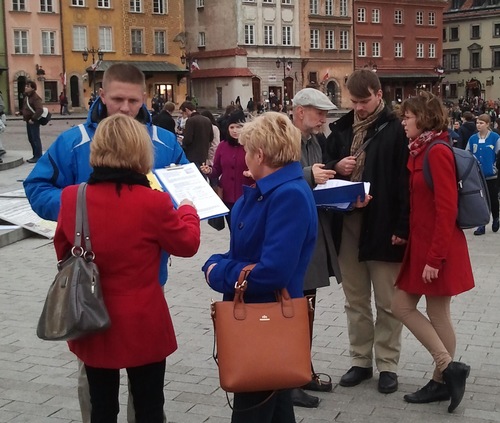 Several Polish women carefully read the display boards at the Warsaw center subway station square. They learned that Falun Gong practitioners were persecuted by the Chinese Communist Party (CCP) merely for their belief in “Truthfulness- Compassion-Forbearance.” They were shocked to learn that not only were they being tortured in prisons, but female practitioners were stripped naked and put into male prisons to be humiliated. When they read that Falun Gong practitioners’ organs were removed without anesthetic injections, everyone could not stop their tears from swelling up. They signed the petition, and one of them even stopped to wipe away tears several times. They said, “How could this happen? It’s murder, and the United Nations and the international courts should immediately intervene. Hang in there and God bless you.” 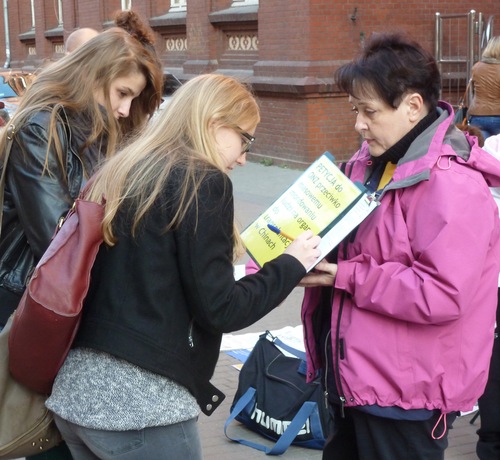 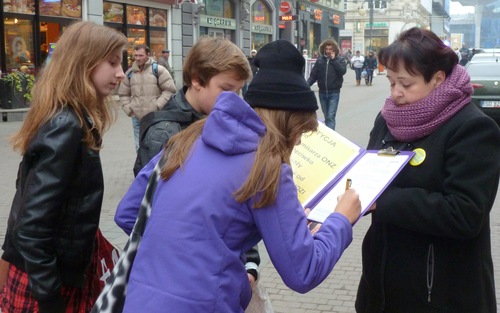 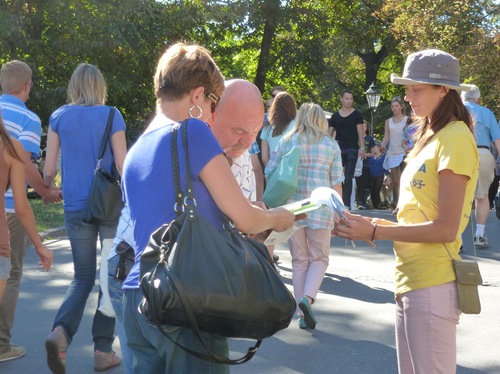 Knowing the Chinese regime’s brutal persecution of Falun Gong practitioners, a Polish man not only signed the petition, but he also asked a Chinese practitioner to teach him to write “Down with the CCP” in Chinese. He copied every stroke of the characters and said, “I’ll write these words to those Chinese people I know, and I will tell them that your regime is the devil, that the CCP is Satan, and will be judged for sure.”

A couple from China saw the display boards at the Warsaw center subway station square. Although they didn’t understand Polish, they were horrified by the photos of Falun Gong practitioners being tortured. They asked a practitioner, “Are these photos about Falun Gong in China? Are they true?” The practitioner told them about the CCP’s atrocious crimes one by one while pointing to the photos, about the amount of organ transplants in China shooting upwards, and the CCP’s brainwashing propaganda. The couple signed the petition using their real names. They told the practitioner, “We’ve quit the CCP in Denmark, but we were not clear about the facts of Falun Gong, as we were in a rush to go at that time, but now we finally understand. We hope that the CCP, such a rotten regime, will fall soon so that they won't be able to harm the Chinese people any more. When we get back to China, we’ll have the whole family quit the CCP. Nowadays Chinese people really need to keep their eyes open, and they cannot be muddle-headed.”

A Chinese woman dressed in traditional costume works in Poland, and she would stop to read the display boards and listen to practitioners almost every time she came to the subway to make a train transfer. She signed the petition using her real name and said, “Someone in my family practiced Falun Gong in China, I was little at that time, and didn’t quite understand. Later on a lot of changes occurred in China, and people who practiced Falun Gong were arrested by the CCP. I was frightened, and dared not even to ask why, so I missed the opportunity.

My family helped me quit the CCP, but I don’t really know much about the facts. Now that I have met you, please tell me more about it.” A practitioner began to explain that Falun Gong practitioners were discredited by the CCP with slander, and they smeared it with the infamous staged self-immolation and false charges of “besieging Zhongnanhai.”

The practitioner explained about the CCP organ harvesting from living Falun Gong practitioners and the evidence, right up to how the heaven will destroy the CCP and the importance of quitting it. In the end, the practitioner said, “All the facts can be found on the website minghui.org, as well as the Falun Gong Master’s books. That is the best way to get to know Falun Gong, and to learn about the CCP’s lies and rumors. Don’t be afraid, as this is not China, and the websites won’t be blocked when you search for the truth. This opportunity is rare.” The woman said happily, “Yes, I forgot this is a free country, I will definitely read Zhuan Falun online. I’ll see you next time.”

There was a deaf and mentally challenged woman, and after signing the petition, she got her friends over and using sign language, she explained what was said in the display boards and asked everyone to sign the petition.

A Polish man, upon hearing how a Chinese Falun Gong practitioner could only use very simple Polish to explain the facts, volunteered to explain at length what was happening. He did that for two days until the petition campaign came to an end. When practitioners showed him their appreciation, he said, “That’s what I should do, I just did what I should do.”

Quite often people wanted to buy Pudu , Jishi music CDs (instrumental Falun Gong music) at the scene. After signing the petition, some people still stood nearby to listen to the music Pudu and Jishi . Some people even asked about Falun Gong exercises and reserved the book Zhuan Falun . Several people from Taiwan came over and left their contact number, as they asked for help to buy Shen Yun Performing Arts show tickets. They said, “We all know Falun Dafa is good, the CCP persecutes such good people, and they will definitely be punished by heaven!”