(Minghui.org) Falun Gong practitioners in France held an event on the Place du Trocadéro next to the Eiffel Tower in Paris to call for an end to the brutal persecution of Falun Gong in China.

The activity, which took place on Sunday, November 24, 2013, included a Falun Gong exercise demonstration, clarifying the truth to passersby about the persecution in China, collecting signatures for the DAFOH (Doctor's Against Forced Organ Harvesting) petition, and explaining what Falun Gong is. 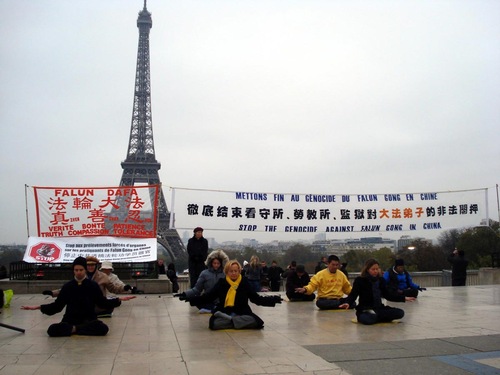 Falun Gong practitioners in France on the Place du Trocadéro in Paris, informing people about Falun Gong and the persecution 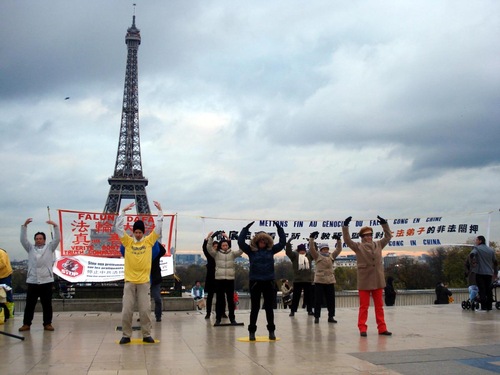 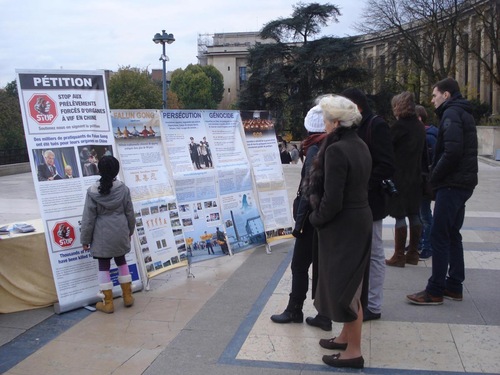 Reading the banners about the persecution 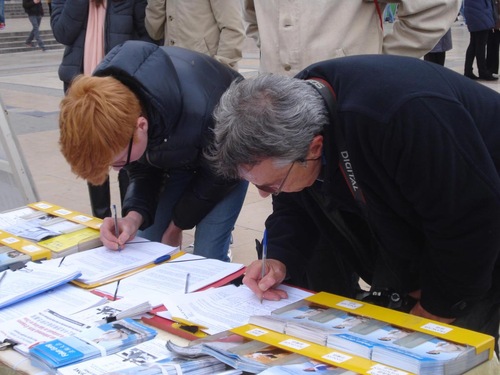 Signing the petition to end the persecution and forced organ harvesting

The Reality of Organ Harvesting Stuns Many

People were shocked to learn about the Chinese Communist Party's (CCP's) harvesting of organs from living Falun Gong practitioners. Three university students did not understand why the CCP would do such a thing.

As the persecution escalated in 2006, the CCP’s crime of live organ harvesting from Falun Gong practitioners was revealed by the wife of a doctor who was involved in the practice. The documented number of deaths of Falun Gong practitioners due to police violence is now over 3,000. The actual number could be in the tens of thousands." After understanding the truth, the three young people signed the DAFOH petition.

A French citizen videoed the information displays. He intended to show the video to his friends and colleagues, so that they could also understand the persecution taking place in China.

Passersby Drawn to the Beauty of Falun Gong

The beautiful and peaceful exercise music and Falun Gong exercise demonstration attracted many spectators. People admired the practitioners doing the exercises in the cold. Many took photos or recorded the event with handheld devices.

Four students came together to the Place du Trocadéro. After seeing the exercises, they asked to learn them. When they left. they took further reading materials about Falun Gong.

There was no shortage of Chinese tourists on the Place du Trocadéro. Two of them took some materials printed in Chinese. They said that they had heard of the movement to withdraw from the CCP. A practitioner told them that only if they quit the CCP and its affiliated organizations would their future be secure. The practitioner gave one of them a pseudonym and helped him quit the Party. They expressed their gratitude when they left.

Signatures on the petitions included lawyers from the Congo, a businessman from Bangladesh, Tibetans in exile in France, and people from all walks of life in France. After signing the petition, people always said to the Falun Gong practitioners, "Keep it up," “I support you," "Keep up the good work!"