(Minghui.org) Today's news from China includes incidents of persecution that took place in 11 cities or counties in 10 provinces. According to this report, 6 practitioners were subjected to mistreatment during detention, and at least 21 practitioners were illegally arrested. 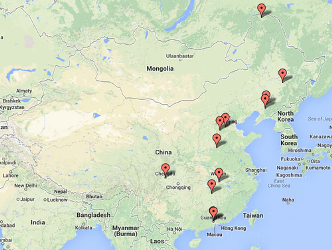 Ms. Zhao Shujuan, Mr. Lao Chang and his wife were arrested by officers from the Xiangping Police Station on November 20, 2013. Mr. Lao Chang's wife was released because of her physical condition. Ms. Zhao and Mr. Chang were transferred to the Liaoyang Detention Center.

Ms. Liu Xiuying from Hunan Province was arrested in Guangzhou at the beginning of November 2013.

Several teachers and staff from the Xiongshi School were recently arrested. They include Mr. Long Gang, Ms. Wang Haixia and Ms. Wang Yuelian. Mr. Long's wife, who is a teacher in Anshan, was also arrested. All arrested practitioners were transferred to the Zhangshi Brainwashing Center.

Mr. Lu Jinyu, 49, a physical education teacher, was also arrested. He had previously worked at the Benxi Metallurgy College in Liaoning Province and had been sentenced to 9 years in prison for his faith. He was brutally tortured, both physically and mentally, while imprisoned.

Ms. Huang Qiuzhen, a former employee of the Xianning Cigarette Factory, was arrested near her home by a plainclothes police officer on the morning of November 7, 2013. Her home was ransacked. She is being held in the Xianning Drug Rehabilitation Center, which serves as a detention facility.

Officers from the Yushu 610 Office arrested Ms. Lin Songtao and took her to the brainwashing center located in the guest house of the Yushu Finance Committee on the night of November 22, 2013. She was transferred to the Shahezi Brainwashing Center after going on a hunger strike to protest the persecution, because she refused to be “transformed.”

Her father and husband were arrested when they went to the brainwashing center to request her release. Her father is being held in a detention center and is seriously ill.

Ms. Fu Shanqing was recently arrested by officers from the Wangcun Police Station. She is being held at a detention center.

Ms. Huang Duohong was transferred to the Hunan Women's Prison from the Xiangtan Detention Center on November 8, 2013.

Ms. Feng Yanfen, 60, and Mr. Sun Xuexian, 49, were arrested when they distributed calendars with information about Falun Gong on the afternoon of November 21, 2013. Yang Xiaofei, chief of the local Domestic Security Division, and other policemen carried out the arrest. The police ransacked the two practitioners' homes and confiscated Falun Gong books and materials, two computers, printers and other property.

Mr. Song Aichang, his wife and his daughter were arrested at home on the morning of November 15, 2013. The police ransacked their home and confiscated all of the bank cards belonging to Ms. Song Meng, Mr. Song's daughter. They also confiscated two computers.

Mr. Song's wife and daughter were released that night. Mr. Song is being held at the Shijiazhuang Detention Center.

Mr. Zhao Tianrong was arrested at his workplace in Dongpu Town, Tianhe District, by officers from the Longdong Police Station on the afternoon of November 19, 2013. The police ransacked his home. He is being held at the Tianhe Detention Center.

“Putting Down My Attachment to Fame ”