(Minghui.org) Many doctors and attendees of the 12 th Congress of the International Society of Organ Donation and Procurement (ISODP) signed the petition to help stop forced organ harvesting in China.

Even during the pouring rain on the afternoon of November 22, they stopped and signed the petition. They didn't mind the hassle or getting wet.

An Offer of Assistance

A doctor from Japan told Falun Gong practitioners that Chinese doctors made a presentation to deny the charges of involuntary organ harvesting in China on the first day of the conference. He volunteered to distribute practitioners' materials to the participating doctors to spread the truth.

The 12 th Congress of ISODP was held in the Sydney Convention Center November 21-24, 2013. Falun Gong practitioners in Sydney set up tables at multiple locations, such as downtown Sydney, in front of Town Hall, and in Chinatown during the four-day meeting, collecting signatures for a petition calling for an end to forced organ harvesting from living practitioners.

Some of the attendees had heard about what is taking place in China from the organization "Doctors against Forced Organ Harvesting" (DAFOH) and other channels and had signed the petition in their local areas. More of them learned about forced organ harvesting by studying photo displays during the conference and speaking to practitioners. They signed the petition and expressed their support for an end to the crime of forced organ harvesting in China. 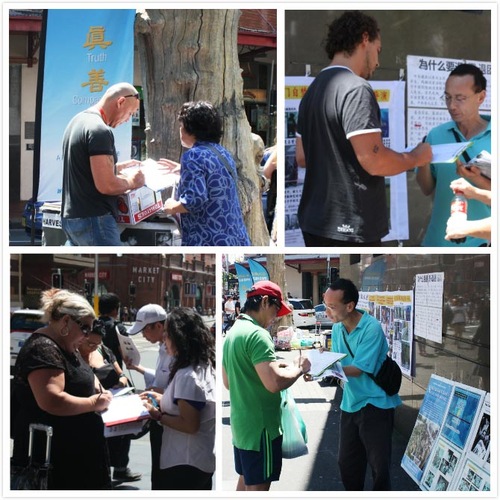 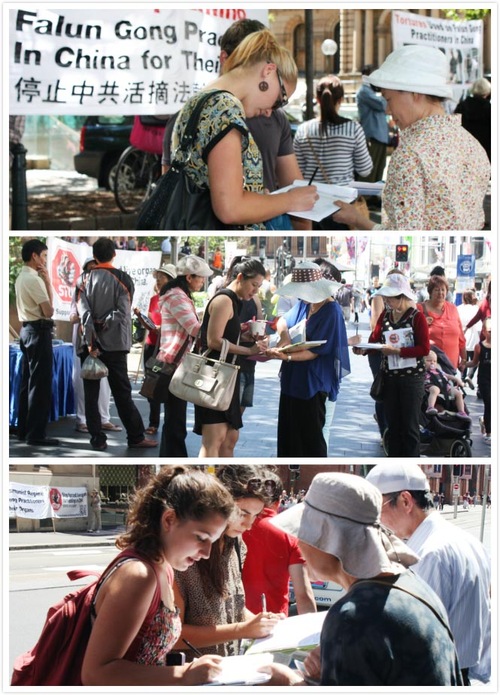 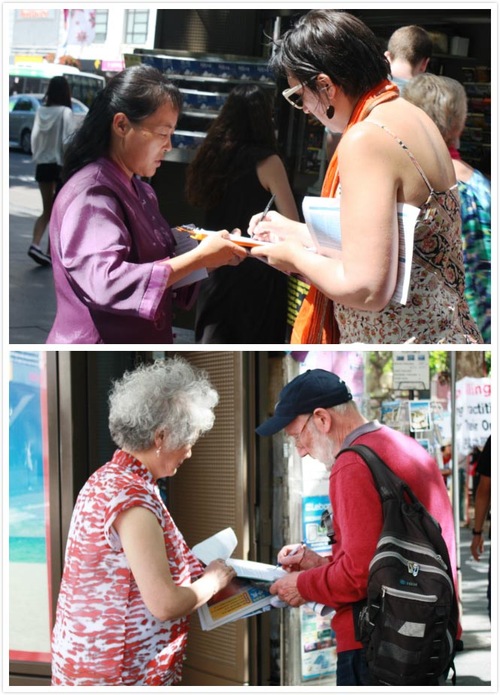 Doctors: This Atrocity Must Be Stopped Immediately

A doctor from the Northern Territory of Australia told the reporter that he had heard about this horrible practice and signed the petition.

"This is 'killing for organs,'” he said. “It must be immediately stopped because it is unethical and against human rights."

Another doctor who signed the petition told a practitioner that he declined an opportunity to go to China to give a speech after he heard about the forced organ harvesting atrocities being committed there.

Helping to Spread the Truth

A doctor and his assistant from Argentina learned about the forced organ harvesting in China for the first time. Alarmed and indignant, they approached the practitioners' booth in front of Sydney's Town Hall and signed the petition. They also took photos in front of the banner that practitioners held. They said they were duty-bound to tell their friends about these atrocities.

Some young people in Australia also signed the petition and promised to spread the information widely.

Lola and Christine were very indignant after they heard a practitioner explain the situation to them and said they would definitely sign the petition to save lives. They would also post the information on their Facebook pages so that more people would learn about it.

Three high school students signed the petition to express their support and said that they would also widely spread the news on their Facebook pages. They said they would recommend that their principal include the information in an open letter to the school, so that their friends and relatives would learn about it and sign the petition to express their support.

Condemning the Chinese Regime for Misleading the Public

A doctor from Japan told a practitioner that he supported their efforts and would take informational materials to help distribute among doctors inside the convention center. He also told the practitioner that a Chinese doctor denied Falun Gong practitioners' allegations on forced removal of organs in a speech during the first day's meeting.

The practitioner explained to him how the Chinese regime lies to deceive the public. He said that China recently announced its intention to phase out the harvesting of organs from executed prisoners by 2015 and to introduce the China Organ Transplant Response System (COTRS), a computerized organ-allocation system.

However, DAFOH released a statement on Minghui.org on September 16, 2013, that revealed the regime's announcement to be a lie.

According to DAFOH's statement: “COTRS lacks transparency: the matching process and information about the organ donors are not open to the public or to an independent third party. With regard to the announced 2015 timeframe, Chinese officials speak vaguely of ending the reliance on executed prisoners, and not of the complete cessation.”

DAFOH recalled that, in 2007, the Chinese Medical Association (CMA) pledged to the World Medical Association (WMA) to end the harvesting of organs from executed prisoners. Six years after China made that pledge, it still has not ended the practice and continues to perform more than 10,000 transplantations every year. Today, the Chinese regime only offers an indefinite timeframe—to "phase out" the practice.

DAFOH commented that China's recent announcement is only empty talk, yet another lie to fend off pressure from the outside world.

With more people becoming aware of the Chinese regime's criminal acts, this awareness will help people see clearly the Chinese Communist Party for what it is and help put this crime against humanity to an end.

The signature drive during the 12 th Congress of ISODP is one part of the ongoing global signature collection drive initiated by Doctors Against Forced Organ Harvesting since June 2013. The petition will be submitted to the UN Human Rights High Commissioner to pressure the Chinese regime to immediately stop the forced organ harvesting from Falun Gong practitioners in China.

As of the end of October, 800,000 signatures have been collected. Thousands of medical doctors and professionals signed the petition, condemning the unethical forced organ harvesting.

“Quitting the Chinese Communist Party: A Major Objective for Many Chinese Traveling Abroad”