(Minghui.org) Today's news from China includes incidents about persecution that took place in 5 cities or counties in 4 provinces. In this report, 3 Falun Gong practitioners were subjected to mistreatment during their detention, and at least 8 practitioners were illegally arrested. 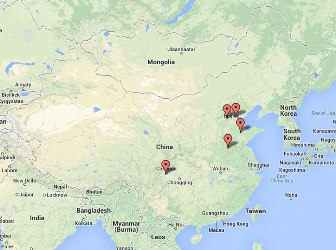 The Liangyuan District Court in Shanqiu City opened a session for Ms. Jia Yujie on November 27, 2013, without informing her family. Ms. Jia was sentenced to 7-9 years in prison.

Ms. Hu Xuewen, over 60, a farmer from Gongyi Town; and Ms. Huang Shuixia, almost 50, a farmer also from Gongyi Town, were both arrested by officers from the Fengming Town Police Station at around November 20, 2013 for distributing calendars with information about Falun Gong and the persecution. They are currently being held in the Pengshan Detention Center, also known as Penshan New Prison.

Ms. Zhen Shuzhen, in her 70s, from Yiyuan County, was arrested on the afternoon of December 2, 2013 for informing people about the persecution of Falun Gong.