(Minghui.org) Husband and wife Mr. Shi Mengchang and Ms. Han Shujuan are currently being held at the Qinglongshan Brainwashing Center. Their relatives and the four lawyers hired to represent the Falun Gong practitioners illegally detained at the brainwashing center, went there on November 14, 2013, to appeal for every practitioner's release. Officials at the brainwashing center, however, refused to meet with them, and locked the front gate and turned off all the lights. 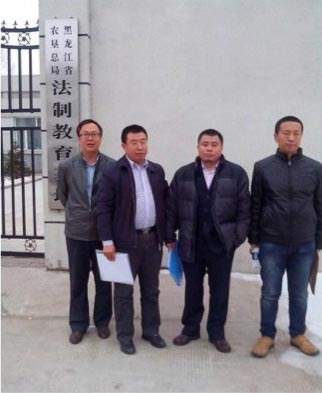 Mr. Tang Jitian, Mr. Jiang Tianyong, Mr. Liang Xiaojun, and Mr. Wang Cheng were hired by the practitioners held at the Qinglongshan Brainwashing Center. They arrived at the brainwashing center with Mr. Shi's and Ms. Han's relatives at 3:10 p.m. on November 14, 2013. However, the guard refused to open the gate to let them inside.

The lawyers told the officers that innocent citizens were being detained at the brainwashing center and that they intend to report it to the police. The police still tried to arrest the lawyers for so-called “obstructing the process.” The lawyers protested that the charge wasn't valid, and refused to show their ID cards, since they weren't violating any law. 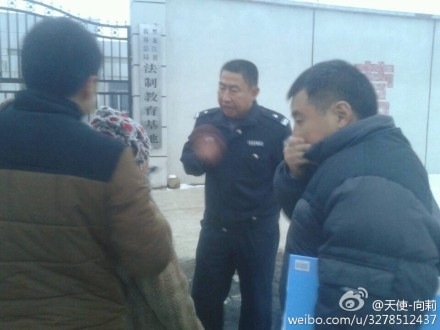 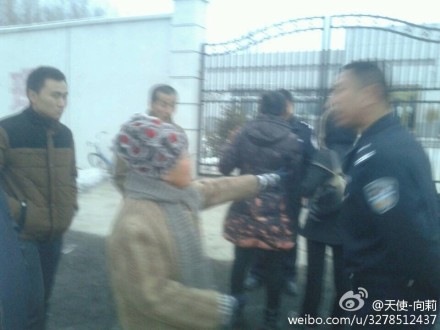 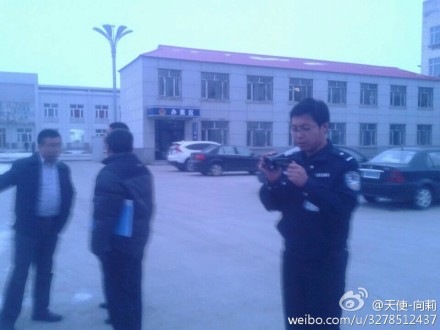 The lawyers began to voice their appeal, “Fang Yuechun, Tao Hua, Fang Xiumei, Jin Yanpeng, and Zhou Jingfeng, all of you have committed a crime. Fang Yuechun, you have detained innocent citizens without legal proceedings and will face an internal disciplinary process. Do you truly believe that you won't be held responsible because of your current position at work? Do you think that no one will know what you have done? We hope that you release all Falun Gong practitioners immediately; otherwise you will be sued.”

It started to snow at around 5 p.m. Many officers from the Qinglongshan Farm Police Department closely monitored the scene. Director Fang continued to make phone calls to get help, but to no avail.

The lawyers and the relatives continued to voice their appeal until it got dark at 6 p.m. Afterwards, they headed back to Jiansanjiang.

The lawyers protest shocked the officials, the guards, and the police officers.

Practitioner Mr. Yu Songjiang had been detained at the Qinglongshan Brainwashing Center. He went with the four lawyers and Mr. Shi's relatives to file a lawsuit against the officials at the brainwashing center for “illegal detention” on November 15, 2013. They visited the Jiansanjiang Procuratorate, the Commission for Discipline Inspection, and the police department, to request that all the practitioners be released immediately.

Staff at the Office of Letters and Calls expressed that they would pass the information to all of the related departments.

The staff at the Procuratorate took notes of the complaints and disclosed that they had been receiving an overwhelming number of calls from practitioners. The lawyers then went to the Public Security Inspection and Commission for Discipline Inspection to file a complaint.

Officials from the 610 Office of the Heilongjiang Provincial Political and Legal Affairs Committee (PLAC) and the Heilongjiang General Bureau of Reclamation PLAC colluded together in 2010 to set up the Qinglongshan Brainwashing Center inside the Jiansanjiang Administration Bureau Qinglongshan Farm. Initially, only practitioners inside of the reclamation system were detained at the brainwashing center. Now practitioners from outside of the system are also held there.

Fifty-three cases have been confirmed of practitioners being held at the brainwashing center. Many who have been imprisoned there are still trying to recover from the mental and emotional tortures they suffered.

Ms. Chen Min from Mishan City was arrested on July 11, 2013, while telling people the truth about Falun Gong at the Mishan Train Station. Officers from the Mishan Train Station Police Station sent her to Mudanjiang City and detained her for 30 days. Ms. Chen was taken back to Mishan on August 10, 2013, and directly taken to the Qinglongshan Brainwashing Center.

Ms. Jiang Xinbo, a teacher from the Jiansanjiang Administration Bureau Qianjin Farm Middle School, was released from Harbin Women's Prison on September 9, 2013, after serving a four year prison term. She was immediately taken to the Qinglongshan Brainwashing Center on the same day. Three of the eight people involved in her arrest were: Li Junli, female, secretary of the Jiansanjiang Qianjin Farm PLAC; Wang Li, director of the Police Department; and Shi Ping, director of the 610 Office. Her family didn't even get a chance to see her.

Mr. Shi Mengchang and his wife, Ms. Han Shujuan, from Jiansanjiang Qixing Farm were arrested at home on September 23, 2013. More than 10 policemen from the Qixing Police Department surrounded the couple's home. Officers Li Xudong, Guo Tingjun, and Liu Yan then instructed the other officers to break into their home.

Six policemen dragged Ms. Han out of the house, pushed her head to the ground, pulled her hair, carried her by her arms and legs, and threw her into the police car.

The police then carried Mr. Shi out of the home and forcibly put him into the car. His hand was injured during the arrest and didn't heal even after a week. The police did not show any identification or go through the legal procedures during the arrest.

Both husband and wife were taken to the Qinglongshan Brainwashing Center. The officials at the brainwashing center said that they would be held for two months and go through intense brainwashing sessions.

According to an inside source, Mr. Shi is now very weak and has symptoms of thrombosis, a blood clot obstructing the flow of blood through the circulatory system.

Mr. Shi's parents are both in their 80's. They went with their relatives to the Qixing Police Department to appeal for Mr. Shi's and his wife's release. When they asked the police what the legal basis for the arrest was, director Guo Yuzhong rudely said, “So what if we arrested them? Sue us if you want.” When the relatives went to the Qixing Farm Administration Office, secretary Feng Zhigang of the PLAC threatened them and said that Mr. Shi would be sentenced to prison for having a Falun Gong materials production site in his home.

“The Power of a Compassionate Heart”

“Violence and Terror behind the Beautiful Facade at Gongzhuling Prison”