Ms. Li Xiaoying is a kind and honest woman who was sentenced to a forced labor camp 12 years ago because she practiced Falun Gong. She was force-fed unknown drugs during her detention, which resulted in her having a mental disorder.

After she was released, she improved after receiving medical treatment. However, officials from the local residential committee harassed and threatened her constantly, which has caused her mind to reach the point of total collapse.

Ms. Li Xiaoying previously lived in Liupanshui City, Guizhou Province. She came to Shanghai and opened a tailor's shop many years ago. She started practicing Falun Gong in 1997 and benefited both physically and mentally. However, since the Chinese Communist Party (CCP) initiated the persecution of Falun Gong, her life has been turned upside down.

Ms. Li and Her Husband Persecuted for Their Belief

In April 2001, officer Yang Zheng and others from the Pingliang Road Police Station and 610 Office broke into Ms. Li's home, and arrested her husband Mr. Zhu Degui. The police then asked Ms. Li if she practiced Falun Gong. She answered “Yes.” So the couple were were both arrested. Mr. Zhu was sentenced to prison and detained in Shanghai Tilanqiao Prison. Ms. Li was sentenced to a two-year term to be served in the Qingpu Forced Labor Camp. 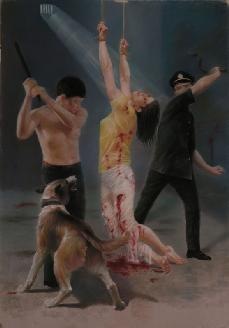 Torture illustration – Hung up and beaten

Ms. Li was locked in a small cell, hung up by handcuffs, and beaten for 15 days. She was not allowed to use the restroom. The guards even ordered inmates to stranglehold her when she slept at night almost asphyxiating her, and she became unable to walk as a result of the torture. She was forced to do hard labor, and stand still for long periods of time until very late in the evening. The guards force-fed her poison which resulted her in becoming mentally disordered.

After Ms. Li was released, Sun Jiamei, Wu Afeng, and Zhao Yinsheng from the local residential committee frequently came to her home to harass her. Ms. Li was petrified and started trembling and mumbling nonsense. She once threw garbage on her bed to stop these people from wanting to come into her house.

Ms. Li was taken to hospital in 2006, 2008, and 2011 to receive treatment, and did get better afterward. But the harassment by officials from the local residential committee caused her situation to turn for the worse.

Ms. Li's husband chastised these people, demanding that they stop interfering with their peaceful life. But one of them said, “Who told you to marry this kind of woman? You are her guardian, so you have to take responsibility for her.”

Ms. Li's electric-powered car was confiscated by people from the local residential committee during the 18 th Chinese Communist Party's Congress in 2012. This incident was stressful, and negatively affected her already-delicate mental state.

He Weixian from the Daqiao residential committee in Yangpu District, and He Huifang from the local district 610 Office ignored Ms. Li's fragile condition, and knocked on her door constantly in August 2013, demanding to talk to her. Ms. Li couldn't take the pressure any longer, and she suffered a mental collapse. She then left home to avoid further harassment, and wandered along the streets, sleeping on the road at night.

“How I Eliminated the Notion That I was Better Than Others”

“I Wouldn't Be Alive, if Not for Falun Dafa”