(Minghui.org) On September 28, 2013, nearly 800 Falun Dafa (Falun Gong) practitioners from all areas of Australia gathered in Sydney to participate in a grand parade and Great Wall of Truth event. Through the activities, the people of Sydney gained a better understanding of Falun Dafa and are more aware of the Chinese Communist Party's persecution of the practice, including the crime of forced organ harvesting from living Falun Gong practitioners. 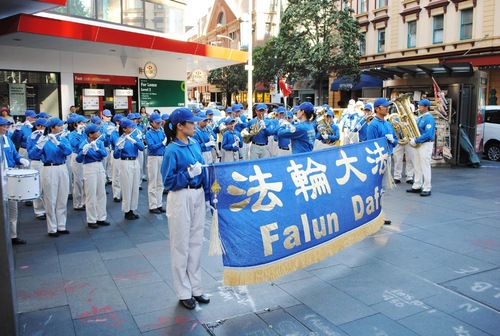 The weather was beautiful during the two-day event. Dafa practitioners from Melbourne, Canberra, Brisbane, Adelaide, Perth, and Cairns traveled to Sydney to participate. After parade, which lasted an hour, the practitioners moved to Chinatown and the Sydney Town Hall to form the Great Wall of Truth.

The Persecution Must Stop!

Banner after banner, the Great Wall of Truth stretched all across Chinatown. Local residents and tourists signed their names on a petition to support Falun Gong and call for an end to the forced organ harvesting from imprisoned practitioners. An international student from Belgium signed her name and remarked, “I think the human rights situation in China is very bad. People ought to have freedom. The persecution must stop!”

A European tourist said he believed that the Chinese regime's suppression will be met with the resistance of the Chinese people. “The Communist regime wants to control all the people of the nation and forbid people to have freedom of belief. It is really bad, and one day, the Chinese people will rise up and resist.”

A couple of young Australian passersby noted, “The persecution should never have happened in the first place.”

Worth the Distance to Participate in the Activities

After the parade, Ms. Lin from the Gold Coast was deeply impressed. “Even though I participated in the parade, and I am deeply impressed too. The parade is to let more people know about Falun Dafa and let people know that the world needs [Dafa's principles of] Truthfulness-Compassion-Forbearance. We also want to have people become aware of the most evil crime in human history, the Chinese Regime's live organ harvesting from persecuted practitioners. We traveled a long way to participate in this event, in the hopes of ending the persecution as soon as possible.” Ms. Lin said that she saw a lot of people taking photos and videos, including many Chinese people. 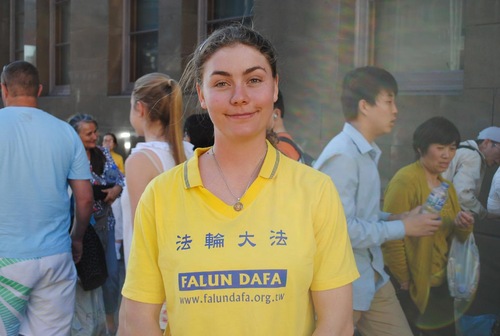 Amy traveled five hours by train from Merrywell to Sydney. She had been invited to a local women's group to speak about the persecution of Falun Gong. Immediately after the meeting, she jumped on the train to Sydney and only slept about one and a half hours during the journey. But she didn't feel tired; instead, she was very energetic. “Even though I only slept a little more than an hour, attending such an event has made me energetic. Because I want to tell people that the Chinese Communist Party is still persecuting Falun Gong. I think this is the most important thing,” said Amy.

“How Compassion Changed a Gangster's Heart”